The Bold and the Beautiful (B&B) Spoilers: Sasha Brags About Zende’s Love – Nicole Erupts in Fury, Pregnancy at Risk 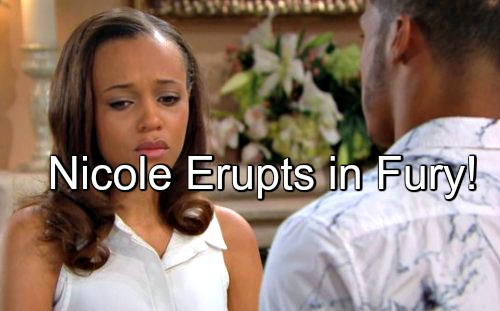 “The Bold and the Beautiful” (B&B) spoilers reveal that Sasha (Felisha Cooper) will get back to gloating on next week’s episodes. Now that Sasha has won Zende’s (Rome Flynn) heart, she’s more than happy to rub it in Nicole’s (Reign Edwards) face. Sasha has a hot boyfriend and she’s achieved sweet revenge.

She feels like she’s on top of the world right now.

When Sasha brags about Zende being in love with her, Nicole will fly into a rage. “The Bold and the Beautiful” spoilers say Nicole will demand the truth from Zende. She’ll want to know if he’s really fallen for Sasha this quickly.

If Zende’s answer is yes, Nicole will likely contend that she didn’t mean much to him at all. Zende certainly had no qualms about moving on.

Nicole realizes that the surrogacy was a lot to take in, but she won’t understand why Zende couldn’t have chosen literally any other woman. Instead, Zende hopped into bed with her former friend and current enemy. Zende will try to explain, but it’s probably pointless.

Nicole is furious and Zende is smitten with his new gal. It looks like they’ll just have to learn to live with the situation.

However, that doesn’t mean Nicole’s anger will subside. As Sasha and Zende grow closer, Nicole could become even more upset. B&B spoilers suggest that Nicole’s baby might be born during May sweeps.

Could a heated confrontation with Sasha send Nicole into early labor? It’s a possibility to consider. Nicole might even lose the child or at least end up with a baby in the NICU.

Still, “The Bold and the Beautiful” has set up this new addition and they may want to see it through. Let’s hope the child will survive. Of course, Nicole’s baby might be ready to go by then. They SORAS kids in the womb these days.

Whatever the case, we don’t want to be robbed of all the juicy storylines that could come after the birth.

Nicole might become attached to the baby and want to keep it for herself. There could be plenty of sister vs. sister drama in the works. Plus, Zende might hook back up with Nicole after the surrogacy’s over.

Could a cheating scandal be on the way? No one would be surprised! Sasha deserves whatever she gets. Stick with the CBS soap for updates on the chaos ahead.

So B&B fans, what do you think about the news that Sasha will claim Zende is in love with her? Will Zende back up that statement? How will Nicole feel about all of this? Will Nicole manage to get payback someday?