The Bold and the Beautiful (B&B) Spoilers: Steffy Begs for Another Chance, Liam Says No – Nicole Losing Zende 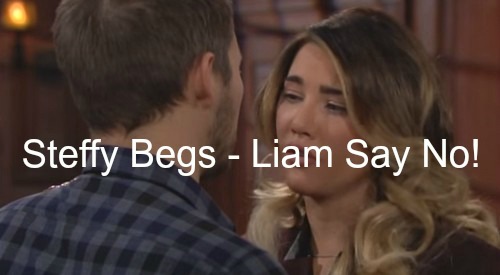 “The Bold and the Beautiful” spoilers for Tuesday, January 19, tease that Sasha (Felisha Cooper) will open up to Zende (Rome Flynn) about what Nicole (Reign Edwards) did to her. Sasha will feel like she was given the greatest opportunity of her life and Nicole just threw it all away.

When Nicole shows up, Zende will confront her about stabbing Sasha in the back. It’s clear that Nicole’s jealousy has gone too far this time.

Nicole will try to explain why she felt the need to intervene. She obviously thought Sasha and Zende’s working relationship could turn into something more. “The Bold and the Beautiful” spoilers say Nicole will nervously confess that she’s terrified of losing Zende.

Will Nicole’s beau be willing to forgive or could this be the final straw? Time will tell, but things will likely be tense either way.

Meanwhile, we’ll see plenty of tension between Steffy (Jacqueline MacInnes Wood) and Liam (Scott Clifton) as well. B&B spoilers indicate that Steffy will talk to Liam about sorting out their current mess. Unfortunately, Liam won’t be in the mood to fix anything. When Steffy pushes him for a second chance, Liam will insist that he can’t trust her.

Steffy will be confused about why Liam is so determined to shut her out. However, we all know what Liam has on his mind. Liam can’t forget seeing Steffy and Wyatt (Darin Brooks) in bed together. Steffy will sense that Liam feels like she’s been disloyal. She’ll believe Liam is looking at her as if she betrayed him. Of course, that’s exactly what Liam believes happened while he was out of town.

Nevertheless, Steffy will declare that she knows it isn’t over. It seems Steffy is trying to hold onto Liam with everything she has. Liam, on the other hand, will believe this is the end of the road. No matter what Steffy says or does, it won’t be enough to convince Liam to give her another shot.

Wyatt will find out that Liam is leaving Forrester Creations and will be distancing himself from Steffy. When Quinn (Rena Sofer) gets the news, she’ll immediately start plotting her next move. If Quinn has anything to say about it, Wyatt and Steffy will soon be closer than ever.

Stick with “The Bold and the Beautiful” for updates on Quinn’s sneakiness.

So B&B fans, what do you think about Nicole and Zende’s problems? Will they fix their relationship or will this new snag tear them apart? Will Wyatt win Steffy over during her continued conflict with Liam? Voice your opinion in the comments below and don’t forget to check CDL often for the latest “Bold and the Beautiful” spoilers, updates and news.

The Bold and the Beautiful Video Promo for Tuesday, January 19 2016