BY Stormy Elizabeth on May 30, 2016 | Comments: 3 comments
Related : Soap Opera, Spoiler, Television, The Bold and the Beautiful 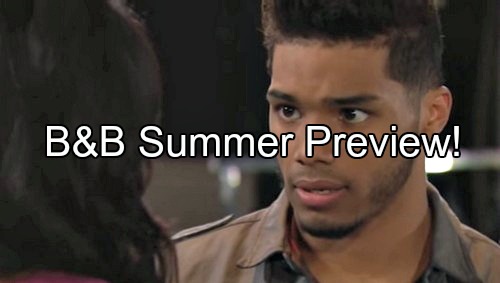 “The Bold and The Beautiful” (B&B) spoilers Summer preview reveal that as the temperature rises this season, so does the drama. Three love triangles tangle and get more complicated, there’s big trouble at Forrester Creations, and CEO Ridge faces insurmountable challenges on two fronts.

The Bold and the Beautiful spoilers say that the truth about Douglas’ paternity comes out to more people close to the Forresters – Bill Spencer (Don Diamont) is next to discover the secret. As word spreads, Caroline Spencer (Linsey Godfrey) and Ridge Forrester (Thorsten Kaye) close ranks to protect their son.

The problem is, because of Ridge going overboard to protect Douglas, he’s alienated Thomas Forrester (Pierson Fodé) who will unpack his bags and refuse to go to Shanghai. Thomas is in agony because he doesn’t want to ruin the family, but can’t be away from his son.

After Ridge makes another pushy ultimatum, Thomas snaps and calls his dad on it and tells him he’d better respect him since he’s Douglas’ father and Ridge is just the grandpa. Thomas will tell his dad he’s calling the shots now and Ridge won’t like that one bit.

Meanwhile, Rick Forrester (Jacob Young) continues to scheme to oust Ridge and now Bill also wants Ridge out. Rick and Bill may work together to knock Ridge out of the seat of power. Rick wants his due and continues to pressure Eric Forrester (John McCook) about who should be heir.

But will it be the Douglas paternity truth that finally sways Eric so he sees that Ridge is not worthy of the throne? B&B spoilers remind us that Bill has two other issues to deal with aside from plotting a coup of Forrester Creations. Wife Katie Logan (Heather Tom) continues to battle the bottle.

Interestingly, just as Katie can’t seem to quit the booze, Bill can’t seem to quit Brooke Logan (Katherine K Lang) who looks better and better to Bill as Katie circles the drain. B&B spoilers reveal there is a twist in the Brooke-Bill-Katie triangle that no one will see coming.

Bill also has Wyatt Spencer (Darin Brooks) issues to deal with. An incident with Liam Spencer (Scott Clifton) has Wyatt wondering is his marriage to Steffy Forrester (Jacqueline MacInnes Wood) is legal and 100% legitimate.

Is Wyatt worried that his Italian divorce from Hope Logan (Kim Matula) wasn’t done properly? If so, that means he and Steffy aren’t really hitched which would give her an opportunity to walk away from Wyatt without contemplating divorce.

This puts Wyatt into a panic and he and his dad turn to someone in Bill’s past for assistance and answers. Steffy is also concerned because Quinn Fuller (Rena Sofer) tries to involve herself in Wyatt’s life now that she’s free from the threat of jail.

Steffy doesn’t want Quinn around but will Wyatt kick his mom to the curb in favor of his new wife? Will Quinn also try and see Liam again? Or did Liam’s rejection of Quinn at the jail make it clear there’s nothing there? Fingers crossed for more Liam-Quinn action!

Also, the triangle of Sasha Thompson (Felisha Cooper), Nicole Avant (Reign Edwards) and Zende Forrester (Rome Flynn) will heat up this summer. Meanwhile Nicole doesn’t want Zende to be near Sasha but Ridge makes that harder. Ridge offers Sasha a great new opportunity at FC, but if Zende wants to be part of it, which would help his career, he’s got to violate Nicole’s rules about seeing Sasha.

Lots happening this summer on B&B. Share your comments on the triangle action and battles over Forrester Creations and baby Douglas. Plus, check back with CDL every day for more “The Bold and The Beautiful” spoilers and news.