‘The Bold and the Beautiful’ Spoilers: Thomas Wants Caroline Back, Ridge Sulks – Katie Convinced of Cheating, Brooke Backs Off 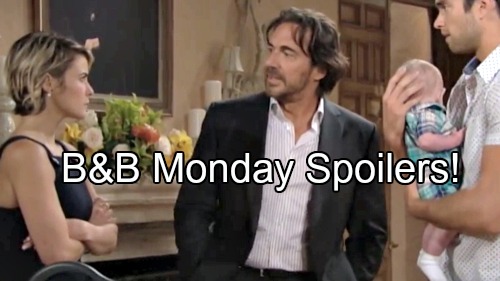 The Bold and the Beautiful (B&B) spoilers for Monday’s episode, June 27, next week tease that Katie (Heather Tom) will have heated words with her sister. She won’t be able to shake the feeling that something is going on between Brooke (Katherine Kelly Lang) and Bill (Don Diamont).

Katie will insist that she has to drink to drown out that little voice in her head.

Brooke knows she’s the reason Katie is having such a rough time. She’ll determine that she has to let Bill go. It’s the only way Katie can ever get a grip. Bill will do his best to downplay the drama. He’ll assure Katie that he cares about her health and well-being.

The same goes for Brooke. Bill will indicate that he wants what’s best for his wife.

Of course, Bill is pretty much lying through his teeth. He cares about Katie on some level, but not nearly as much as he claims. If Bill really loved Katie, he would put aside his desires and honor his commitment to her. Instead, Bill chooses to make Katie think her suspicions are all in her head.

Other Bold and the Beautiful spoilers reveal that Ridge (Thorsten Kaye) will have to deal with his defeat. Caroline (Linsey Godfrey) and Thomas (Pierson Fode) just wouldn’t give up their fight to come clean. Ridge has accepted that he won’t be claiming Douglas as his own son anymore.

In Monday’s B&B episode, Ridge will apologize that it took him so long to come around. He’ll admit that he’s sorry they missed out on special moments with their child. Deep down, Ridge doesn’t truly want this. However, he can tell that it’s time to wave the white flag.

Ridge will leave to process the news, which means Caroline and Thomas will be alone for a heartfelt chat. Thomas will confess that he wants to be with a family with Caroline and Douglas. He’s never gotten over his former flame. Now that they have a son together, Thomas will think this is the perfect opportunity for a fresh start.

The Bold and the Beautiful spoilers say Caroline will quickly dismiss that idea. She’ll state that she still loves Ridge and intends on remaining loyal to him. Unfortunately, it looks like Ridge didn’t go as far as they thought.

He’ll overhear Thomas’ feelings for Caroline, but he’ll exit before Caroline rejects him. Ridge will sulk as his world falls apart.

This could be the beginning of the end for Ridge and Caroline. It may take a while for all of this to play out, but they’re laying the foundation for a Thomas and Caroline pairing. As for Ridge, he’s likely destined for a love triangle with Brooke and Bill.

Bottom line, many of the couples on B&B right now will probably break up within a few months. If they’re your favorites, don’t worry too much. Maybe your preferred pairing will reunite one day. Soaps are quite fond of multiple chances! We’ll give you updates on the romance ahead.