‘The Bold and the Beautiful’ Spoilers: Week of Aug 16 -19 – Fierce Showdowns, Serious Threats and a Plot for Forrester Control 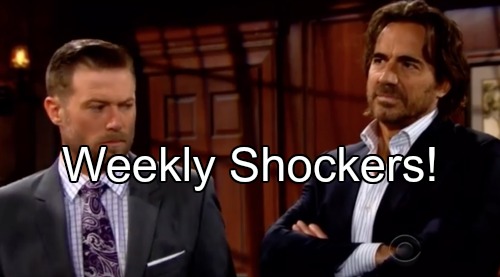 The Bold and the Beautiful (B&B) spoilers for the week of August 15-19 tease that Quinn (Rena Sofer) will be the main source of drama. Now that Eric (John McCook) has rehired Quinn at Forrester Creations, things are going to get crazy. You can expect some heated moments as Eric faces off with his family.

The Forresters can whine all they want, but Eric isn’t going to change his mind about his relationship with Quinn. He’s standing by his decision to bring her back to his company, too. The key words there are “his company.” Eric might suggest that anyone who doesn’t like the changes can leave. There are plenty of other places to work.

Quinn will probably put on an innocent act while Eric praises the shifts he’s seen in her personality. He believes his love goddess is on the straight and narrow. It’s true that Quinn has settled down slightly, but the fact that she’s involved with Eric at all is a red flag.

The Bold and the Beautiful skipped over the beginning of this romance. In some ways, that was kind of fun. It allowed B&B to drop a major bomb on fans. Whether you erupted in laughter or gasped in horror, the reveal of Eric and Quinn’s relationship was soapy goodness.

However, we’re left to ponder how this connection began. It would be nice if we could see fake flashback or two, but it doesn’t really matter now. Regardless of how it came about, there’s no denying that Quinn and Eric are in love.

Even though Quinn cares about Eric, she had an ulterior motive when they first hooked up. Quinn initially wanted to gain Forrester acceptance, but the chances of that happening are slim to none. No one looks ready to welcome Quinn to the family anytime soon.

Quinn may be what finally unites Rick (Jacob Young) and Ridge (Thorsten Kaye). They’ve actually found an enemy besides each other. Ridge will realize what’s at stake here. He can’t let Eric remain in charge with Quinn as his right-hand woman.

The Bold and the Beautiful spoilers say Ridge will carry out his plan to regain control of the company. With any luck, Katie (Heather Tom) will manage to secure Bill’s (Don Diamont) shares. Ridge will hope that he can knock Eric off his throne and keep Quinn out of the family business.

Meanwhile, Wyatt’s (Darin Brooks) head will be spinning over the latest news out of Forrester. He told Quinn to leave town and what did she do? She resumed her romance, took her old job back and put herself even closer to Steffy (Jacqueline MacInnes Wood). Wyatt will wonder if Quinn is even listening when he talks.

Nevertheless, Wyatt will want Quinn to hear him loud and clear this time around. B&B spoilers indicate that Wyatt will deliver some strict demands. If Quinn doesn’t play by Wyatt’s rules, she could get cut out of his life for good. Wyatt may disown Quinn if she takes this much farther.

Of course, we know that wouldn’t last. Wyatt is a mama’s boy and he always will be. We’ll give you updates on this week’s storylines and more. Stay tuned and don’t forget to check CDL often for the latest Bold and the Beautiful spoilers, updates and news.