The Bold and the Beautiful (B&B) Spoilers: Week of May 2 – Douglas Paternity Lie Ruins Ridge – Liam Fights for Steffy 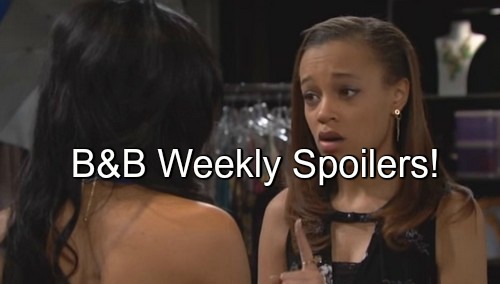 “The Bold and The Beautiful” (B&B) spoilers for next week’s episodes reveal that Nicole gets the truth from Sasha during the week of Monday, May 2, through Friday, May 6, while Julius tries to keep his secret quiet. Ridge panics over his paternity secret while Liam refuses to let go of his ex-fiancée.

Here’s what to expect next week on B&B.

Nicole Avant (Reign Edwards) wants Sasha Thompson (Felisha Cooper) to tell her if she was sincere when she said they’re sisters. Sasha assures her that Julius Avant (Obba Babatunde) is her father too but says she has almost no relationship but Sasha still loves him.

The Bold and the Beautiful spoilers say Nicole confronts her father – looks like her mom Vivienne Avant (Anna M Horsford) is part of the conversation. Julius tries to keep his dirty laundry from being aired, but it’s no good. Julius tries to deal with an upset Sasha and offers her a compromise.

Rick Forrester (Jacob Young) tells Zende Forrester (Rome Flynn) that Nicole is giving them the gift of life and encourages him to reconsider a romance with her. Zende shares some information with Rick about his love life – but B&B spoilers ask is it about Nicole or Sasha?

Sasha tells Zende about her childhood and her father’s neglect and shares her fears about the future. Will she tell him she’s scared he’ll go running back to Nicole once she’s had the baby? Is that Zende’s plan or will he promise to give Sasha a chance?

Katie Spencer (Heather Tom) is not dropping the Dr Wolin thing and presses Ridge Forrester (Thorsten Kaye) about Douglas’ paternity. Ridge finally tells her a lie he thinks will make things better – he says they used a sperm donor.

But that only makes Katie more suspicious because why would someone blackmail him about using a donor? Liam Spencer (Scott Clifton) goes back to work at Spencer Publications still vowing to win back Steffy Forrester (Jacqueline M Woods).

Bill Spencer (Don Diamont) and Wyatt Spencer (Darin Brooks) tell him to respect Steffy’s marriage and choices but Liam won’t back down. Rick considers a hostile takeover and Ridge worries the paternity secret coming out could fuel Rick’s ambitions.

Lots happening the week of Monday, May 2 on B&B – be sure to watch the CBS soap every day and check back with CDL often for more “The Bold and The Beautiful” spoilers, news and more as May Sweeps kicks off.