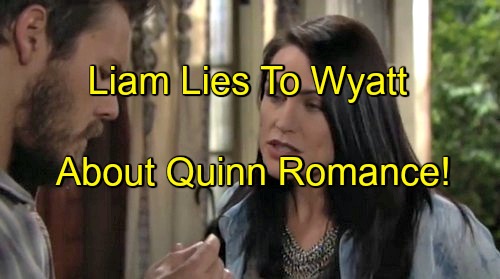 “The Bold and The Beautiful” (B&B) spoilers show us it’s Wyatt Spencer (Darin Brooks) that will find Liam Spencer (Scott Clifton) at the cabin on this week’s episodes – but the lies and drama will only get worse from there as Quinn Fuller (Rena Sofer) scrambles to cover up what she’s done.

We all knew the day would come when Liam would get his memory back and is horror struck that he’s been sleeping with the enemy who also happens to be the mother of his brother. Plus, Wyatt is determined to meet his mom’s new boyfriend and goes to Topanga Canyon.

When it’s Liam he finds there instead of a mystery man, The Bold and the Beautiful spoilers claim Wyatt will realize his mom has done this – and exactly why she did it. Wyatt will know in an instant the only reason he’s married to Steffy Forrester (Jacqueline MacInnes Wood) is that Quinn had Liam trapped.

Wyatt will jump to the conclusion that this is a kidnapping/hostage scenario, particularly given the security footage Charlie found of Liam passing out and Quinn wrangling him into a car and driving him from the Forrester Creations parking lot.

When Wyatt shows up at the cabin, B&B spoilers reveal that Liam’s memory will come back – all of it – and he’ll be utterly appalled that he’s been sleeping with Quinn. Worse yet is the idea of Liam admitting to Wyatt that he was sleeping with his mother.

On Wyatt’s side, while Quinn was keeping Liam stashed, he stole his brother’s job and fiancée. Wyatt will not want to admit that either. But, at the heart of this is a story about brothers. Wyatt has been concerned about Liam and does love his brother.

And Liam loves his brother and will realize he’s been struggling with amnesia and that was not anything Wyatt did to him. The two will ultimately be relieved to see each other but there’s a major question of how it will play out.

We know B&B showrunners filmed two different approaches to the Wyatt-Liam reunion and neither actor knows which version will air. Will we see angry brothers? Wyatt could be mad that Liam went missing and hurt Steffy and Liam could be mad at Wyatt because his mother took him.

Alternately, the brothers could simply be happy to have found each other. Wyatt’s been worried and Liam has been confused and this could be a moment of pure brotherly affection when they see each other again. But we have to say, angry might be more fun to watch.

When Wyatt shows up, Quinn knows the jig is up and she’ll do some major scrambling. After all, Quinn will be the only person in the room with perfect information about all the events on both sides. And Quinn doesn’t want her son or her lover knowing all the details.

We can expect Quinn to do something crazy – a last minute Hail Mary to try and get herself out of this jam. But will it work? And will Liam admit to Wyatt that he’s been sleeping with Quinn or keep his dirty secret as long as he can?

How long before Wyatt mentions to Liam that he’s married to Steffy – the woman Liam still thinks he’s engaged to – and has the job that Liam thinks is his? It could easily appear to Liam that Wyatt stole his entire life. What’s worse, what’s left for Liam now?

What do you think B&B fans? How long will it be before the brothers find out what each other has been up to and is outraged? Share your comments below and check back with CDL every day for more “The Bold and The Beautiful” spoilers and news.