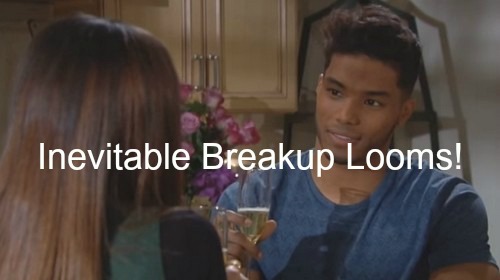 “The Bold and The Beautiful” (B&B) spoilers hint that Zende Forrester (Rome Flynn) is finally fed up with all the baby mama drama and will call it quits with Nicole Avant (Reign Edwards) soon which leaves the door wide open for Sasha Avant (Felisha Cooper) to walk in and take him.

Did you notice on the February 24 episode, when Rick Forrester (Jacob Young) was rubbing Nicole’s stomach and talking about his baby in there that Zende looked queasy? He was literally trapped by Rick against the counter and had to watch Rick rubbing on his woman.

Nicole’s decision, generous as it was, to make her womb a Motel 6 for Rick and Maya Avant’s (Karla Mosley) baby is really messing with his head. The worst part is that it’s Rick and Nicole’s baby so his GF is truly Rick’s baby mama in every sense of the word.

This is totally emasculating for Zende – and the bigger her bump gets, the bigger is the problem. When Zende sets up a romantic date for him and Nicole, her hesitation eats at him and Zende may not be able to take this waiting game anymore.

For Zende, caring about Nicole in theory is fine, but her carrying Rick’s baby is making him undeniably uncomfortable. He’s tried to fight it, but just can’t. Zende needs an outlet for his sexual frustration and a woman in his bed who’s not preggers with someone else’s kid.

Sasha already made a no-strings-attached sex offer to Zende. Is he ready to take her up on it? You know if Sasha hears that Nicole and Zende are taking a break, she will shatter speed records getting herself to him and trying again to bed him.

Will Zende be able to resist this time? Will he even try to resist? After all, there is some justification there. Nicole did try and wreck both his career and Sasha’s even though she made it better after the fact. Will Zende finally get some much needed relief?

What do you think B&B fans? Is the inevitable break up between Nicole and Zende about to happen? And will secret sister Sasha move in fast to scoop up Nicole’s leftovers? Share your comments below and come back to CDL often for more “The Bold and The Beautiful” spoilers.