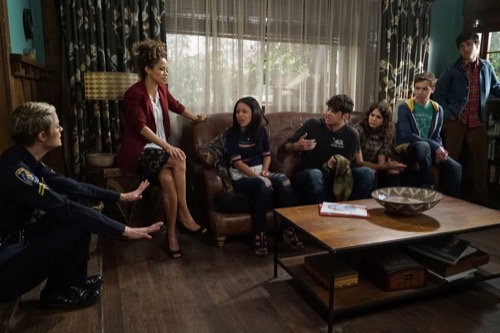 Tonight on ABC Family their hit drama The Fosters returns with an all-new Monday, June 27, season 4 episode 2 called “Safe,” and we have your weekly The Fosters recap below. On tonight’s episode, the Adams Foster household’s on lockdown in their own home following the crisis at school.

On the last episode, picking up where the season three cliffhanger left off, Callie admits her past relationship with Brandon to her moms. But before Stef and Lena can even process the information, the school goes into a “Code Blue” lockdown when it’s discovered Mariana’s boyfriend Nick showed up with his father’s gun after seeing her kiss her ex-boyfriend Mat.

On tonight’s episode as per the ABC Family Synopsis, “the Adams Foster household’s on lockdown in their own home following the crisis at school; and Callie and Brandon anxiously wait for their mothers to address their behavior in Idyllwild. Meanwhile, Stef’s furious when she discovers Brandon snuck out to help Cortney move.”

The family returned home on tonight’s episode of “The Fosters” after their ordeal at school and unfortunately they all had questions about what happened.

Did Nick really have a gun? How did he get a gun? And were the police even sure that Nick had taken the gun from his father’s car? Yet, regardless of what they wanted to hear, neither Stef nor Lena could lie to the kids about what happened. Nick had come to school in an agitated mood and he had managed to evade everyone of authority while he stole a gun from his father’s car and then made off with it. So the one that Jesus wanted to know was why? Why did his friend seemingly snap for reason?

And so Stef and Lena shut him down. They said that no one was at fault for Nick’s actions other than Nick himself. So the parents decided to take immediate actions with what they knew their kids were bound to hear and they banned everything. No computers, no cell phones, no anything! They didn’t want the kids to get upset about what happened with Nick and they specifically didn’t want to deal with the Callie and Brandon problem until they all had a chance to calm down following their ordeal at the school.

But the family ended up having visitors. AJ had come by after he heard what happened so he was able to keep some of the kids’ mind off of what happened however Mariana did use his laptop when her parents weren’t looking to see if she could still log in at ‘Fost & Found’. Mariana had wanted to see if she could help Callie with her rumor problem so she had wanted to set the record straight. She had thought that if she could tell people that what Callie’s former boss wasn’t true that they could still salvage what they built. Which was “Fost & Found” itself!

And sadly for her that’s not what happened when she tried to log in. Mariana realized that she had been erased from the system and that Justina was purposely keeping that out because she had taken over and didn’t want anyone to stop the character assassination that she was doing on Callie. So Mariana had actually gotten pretty upset about that and she had wanted to still see what she could do, but Callie told her not to bother. Callie said they lost ‘Fost & Found’ and she seemed as if she wanted to move on.

So Callie like the rest of her family tried to move on. They had a movie night at the house and Stef did her best to check every nook and cranny every time she heard the slightest noise. Yet, despite her best efforts, Nick somehow got into the house. Nick was hiding out in the garage when he found a way to enter the main house through the window so he was slowly getting closer to them without anyone noticing. And surprisingly Lena had even tried to tell Stef at one point to let up a little bit because she didn’t think that Nick was going to be a problem.

Stef however had her finely tuned instincts. She went around the house several times and had come across Brandon and Callie trying to have a late night chat. So she had shut that down as well and told them to get back to bed. Although she had taken her gun with to be bed. Lena hadn’t been comfortable about it and she had also tried to talk Stef from leaving it on their nightstand yet Stef had just kept it there. She had kept the gun nearby at all times and she hadn’t let up even as she heard back from her friends on the force that Nick had been spotted all the way across town.

Though Stef had done her best to keep her family safe. She had told everyone that they weren’t allowed to go anywhere besides home or school and she had gone up to check the attic after she remembered hearing noises from up there during the night. So Stef had done everything that she could and she probably wouldn’t have left the house if Brandon hadn’t disobeyed her orders. Brandon had wanted to help much older girlfriend move because her ex/ baby daddy threw her out so he had ignored everything his mother told him in order to help Cortney move into her new place.

Stef, though, followed him there so she left the house and then her wife left not that long afterwards because Lena realized that someone had to drop off Jesus at practice as well as take Jude to visit Jack’s grave site. Both things had been considered safe so Lena didn’t think it was all that much to do and anyways Jude needed someone with him. Jude had found out that Jude’s sole remaining didn’t care to collect his remains so he had no idea what happened to Jack and felt like someone should care about what happened to the young man that just wanted to be adopted.

So with the adults both gone, the only people that were supposed to be at the house were Callie, Mariana, and AJ. But they weren’t alone and they hadn’t known that they weren’t alone until Nick finally decided to reveal himself. Nick had waited for the moment that Mariana went back to her bedroom alone and he then revealed himself when he saw that he finally got the opportunity to “talk” to her without anyone interfering. And yet Nick’s objective even as he said that he just wanted to talk with her didn’t seem as if it was as harmless as he said.

Nick was in such a state that the only things that he said clearly was that he hated Mariana. Which he also managed to repeat several times before he told Mariana that he needed to do something to make the hurt go away. So Nick wasn’t reasonable and the more he unraveled was the more he scared Mariana. Mariana saw that Nick was dangerous so she begged him not to her and then she begged him not hurt himself when he put the gun to his own head. Yet, Mariana did a pretty good job at calming him down.

Mariana told Nick that he has her and that she loved him. So she proved that she loved him by showing the necklace he gave her and that she was still wearing, but who knows what would have happened if Callie hadn’t overheard Nick and Mariana in their bedroom. Mariana had talked Nick into putting his gun down and he had been crying on her lap when Stef managed to sneak in. But that entire experience frightened everyone.

From Callie who just managed to email several congressman checks that Justina received from Arbiter as a way to discredit the older woman to Jude who had come home with Jack’s ashes because no one had bothered to bury him. So the only thing that Lena could think about was getting an alarm system and several bars up on the windows. She had wanted to protect her family and suddenly the way she thought she could do that was take all the drastic steps that she normally would have talked Stef out of. However, just because Nick was arrested doesn’t mean that the crisis is over.