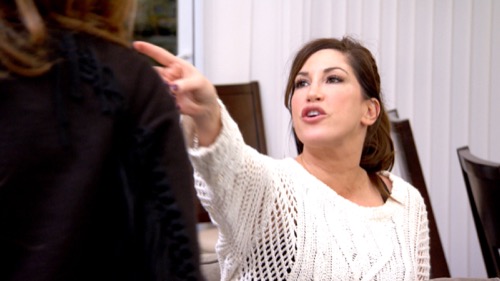 Tonight on Bravo The Real Housewives of New Jersey starring Teresa Giudice and the rest of the housewives continues with an all new Sunday, August 28, Season 7 episode 7 called, “Spa-Cation.” On tonight’s The Real Housewives of New Jersey recap, it’s time for Jersey Giudice to get zen. The ladies head to a spa to celebrate Teresa’s first weekend of freedom since removing her ankle bracelet.

On the last episode, free at last! After being on home confinement for over a month, Teresa said goodbye to her ankle bracelet and the ladies planned a trip to celebrate. Did you watch the last episode? If you missed it, we have a full and detailed The Real Housewives of New Jersey recap right here for you.

On tonight’s episode, “it’s time for Jersey to get zen. The ladies head to a spa to celebrate Teresa’s first weekend of freedom since removing her ankle bracelet. Siggy reveals new information about her husband’s shaky past, and Melissa struggles with her new business venture. Meanwhile, Jacqueline reaches a breaking point with her son, and Dolores worries about her sick 12-year-old dog. Later, Teresa and Jacqueline decide if they are better off as friends or foes.”

Tonight’s episode is going to be filled with more crazy housewife drama that you won’t want to miss, so be sure to tune in for our live coverage of the show tonight at 8 PM EST! While you wait for our The Real Housewives of New Jersey recap hit the comments and let us know how excited you are about this new season of The Real Housewives of New Jersey!

On this week’s episode of Real Housewives of New Jersey Teresa and Melissa head off to the spa weekend to meet up with everyone else. Melissa tells her “I packed four bags.” Teresa says “We’re going to be indoors.” Siggy drives over to the house to pick them up and they head off. Jacqueline and Dolores are on their way up in a separate car. Jacqueline tells Delores “I don’t want to fight with Teresa, but if she start it I bring it.” Teresa tells the other women “Jacqueline hit below the belt when she brought up my legal issues.” Melissa agrees with her and tells her “You two need to just work it out.” Teresa tells her “I don’t want to talk about any of this stuff this weekend.”

When the ladies arrive at the house Teresa, Siggy, and Melissa immediately pick out their rooms. When Jacqueline and Delores arrive the tension in the house immediately rises about a hundred degrees as Jacqueline walks right by Teresa without acknowledging her. Melissa calls her back and tells her “Come here there is someone that I want you to meet. I think you might know her.” Jacqueline comes back and sticks out her hand to shake Teresa’s. Melissa tells everyone “Let’s go get ready for dinner and get rid of some of this tension.”

Meanwhile, Joe is at home trying to make dinner for his kids. He is having trouble making microwave chicken tenders and popcorn for the kids when Joe Gorga calls him and invites him over to the house. Joe tells him “That would be great because these annoying kids can’t do anything right. They have burnt the popcorn.”

While the ladies are having dinner Jacqueline starts discussing her money issues and how they have affected her lifestyle. Siggy says “Everyone has been through hard times. When I got a divorce I had to give up the house, the country club, and the nanny. I called my parents and asked them to come stay with me for a year.” The ladies discuss their different hardships and Siggy says “No matter what happens we are all survivors.” The ladies cheers to that.

Later they are sitting around the fire roasting marshmallows they continue to talk about the struggles they have been through. Melissa talks about watching her mother struggle after she lost her father. She says “I know that I don’t have to work, but I don’t want to be left in the position that my mother was in after my father died.” Teresa talks about how hurt she was and how much she missed her kids while she was in prison. Jacqueline tells her “I know you talk about Melania, but I saw how much it affect Adriana and how much she missed you.” Teresa breaks down and starts to cry. She says “I know. She’s my baby.”

Later the ladies are hanging out and having a great time. They call Teresa’s husband Joe and play a practical joke on him begging him to come and get her. Then they begin playing beer pong and get really drunk.

The next day the ladies wake up and Melissa shows them a video of her son lGino at his wrestling meet. She is really upset that she has missed the meet, but the ladies quickly cheer her up. They all wonder where Jacqueline is. She has gotten really upset because her son doesn’t have those proud childhood moments. She says “At this age, he doesn’t notice the differences, but someday he might.” Delores goes to comfort her. All of the women soon follow to comfort her. Teresa says “I feel for Jacqueline and I can’t even begin to understand her pain. She can’t always be a rock about it. If she needs a shoulder to cry on I’ll be there for her.” The ladies get her up and moving and Jacqueline soon feels better.

Delores and Teresa are talking and Teresa tells her “Jacqueline has a lot on her mind and it makes me wonder if what happens at her house was because she had a bad day with Nicholas.” The ladies head out for a relaxing day at the pool. Melissa and Siggy were having a conversation and Teresa says “I wonder what they are talking about.” Jacqueline responds “ I think they are talking about us.” Teresa calls out to Melissa “Do you want to share with the rest of the class?” Melissa laughs and says “My teacher used to do that to me.” Later that day, as they are having spa treatments, Jacqueline says to Teresa “I need to start socializing Nick with his peers more.” Teresa tells her “Just call me and I will drop whatever I’m doing.” Jacqueline tells her “I’m sorry for the things that I said to you.”

Later that night the ladies are preparing dinner and everyone is having fun eating and talking.  Meanwhile back in Jersey, the men get together for dinner.  Joe Giudice talks about his worries for his family while he is going to be locked up.

Melissa brings up the bad dinner between Teresa and Jacqueline. Melissa says “Sometimes she is not as deep a person as you so she doesn’t get where you’re coming from.”  Everyone is laughing and having a good time. All of a sudden Jacqueline looks over at Melissa and Delores and yells “STOP IT! I AM TIRED OF THE TWO OF YOU WHISPERING BEHIND MY BACK!” All of the ladies are just shocked by her outburst.  Melissa tells her “It wasn’t about you. We were talking about the chocolate.” Siggy tells her “Jacqueline if they were talking about me it is what it is.” Teresa decides to pull out the Yoga mats to help the ladies learn to relax and help Jacqueline ease her stress.