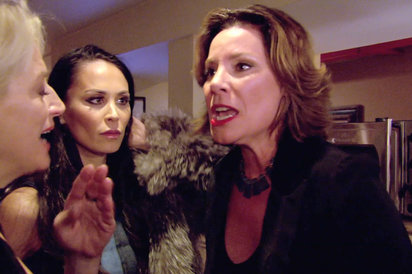 The Real Housewives of New York returns to Bravo tonight with all new Wednesday, July 13, season 8 episode 15 called, “All Bets Are Off,” and we have your weekly The Real Housewives of New York recap below. On tonight’s episode, riled up from listening to the girls talk badly about Luann de Lesseps after she leaves the group dinner, Jules gives Bethenny Frankel a piece of her mind.

On the last episode, despite her health issues, Bethenny glammed it up for a Skinnygirl event at Dylan’s Candy Bar. Did you watch the last episode? If you missed it, we have a full and detailed The Real Housewives of New York recap right here for you.

On tonight’s episode as per the Bravo synopsis, “riled up from listening to the girls talk badly about Luann after she leaves the group dinner, Jules gives Bethenny a piece of her mind. After insulting Luann at the dinner, Ramona attempts to ease tensions with her, but Luann’s not ready to let Ramona off the hook. Sonja hosts an elegant dinner party for Dorinda, Jules and their men, and is pleasantly surprised by the blind date she’s been set up with. The ladies hit the road for Mohegan Sun giving Sonja a chance to finally talk to Bethenny.”

This week on The Real Housewives of New York City LuAnn decides to leave the restaurant in an angry tirade. Dorinda follows her outside to try and find out what is going on. LuAnn tells her “i came out of respect for you, but none of these women are happy for me. They are all talking about who Tom slept with or who he is dating, I’m over it. I’m going home.” Dorinda tells her “Call me tomorrow.” and heads back inside. When she gets back inside an argument erupts as Ramona confronts her and asks what she told LuAnn she had said about her. Dorinda says “I told her that you felt that she was no longer a part of the group and that she had gone back to behaving like the countess.” Then Jules starts in on Bethenny. She tells her “I don’t like the fact that you constantly try to make me feel stupid and that you talk about my eating disorder.”

Bethenny says “You baked silverware and a measuring cup into a calzone! Does that not seem a little crazy?” Jules says “I thought it was funny.” Jules tells her “You have said negative things about my marriage as well.” Bethenny looks shocked and says “When did I say anything negative about your marriage? I have always said how much I  liked Michael. Who told you that I have said negative things about your marriage?” Jules seems to nod toward Dorinda and this causes Dorinda to jump in and say “I never said that you said anything negative about her marriage, I may have accidentally implied that you said something but it was never deliberate,”

Bethenny gets even angrier and says “I am going to speak now. You don’t get to be the only person who gets to speak. I have distanced myself from you because i don’t know you. We are not best friends. “ Bethenny turns on Dorinda and says “Did you tell her that we said something negative about her eating disorder?” Dorinda says “Yes. I think that you have been insensitive about her eating disorder. Just then Ramona announces that she is planning a trip to Mohican Sun and wanted to take all of them along.

The next day Ramona and LuAnn meet up and LuAnn confronts Ramona about the things she said about her to the girls. LuAnn tells her “You weren’t my friend. Dorinda told me that and she should know because you weren’t a good friend to her.” LuAnn tells her “I know what I know and I know that I am going to be with Tom for the rest of my life.” Ramona tells her “You aren’t in love, you’re in lust and being in lust does not mean you should rush to get married.”Ramona tells her “Two of your future husband’s friends told me that you grabbed his hand while he was on a date with another woman.” LuAnn says “Well he may have come with her, but he left with me.”  LuAnn says “The only bright spot in this whole deal was Carole.”

Ramona tells her “Two of your future husband’s friends told me that you grabbed his hand while he was on a date with another woman.” LuAnn says “Well he may have come with her, but he left with me.”  LuAnn says “The only bright spot in this whole deal was Carole.”

Carole is upset about Jules tirade. Dorinda shows up at Carole’s apartment to hang out. She is really impressed with the kitchen. Bethenny is the next to show up. They begin to talk about the confrontation with Jules the night before. Bethenny says “My perception is that she was raising her voice at me without giving me the chance to speak back because she is hiding some deep, dark secret about her marriage. I am now treating her like a piece of glass because I just don’t want to deal with it.” Dorinda is quick to respond “I have never told her anything.” Bethenny says “I don’t want anything to do with her. I don’t need an apology from her or anything. I am just done.”

Sonja is preparing a dinner party but she is only inviting Jules, Dorinda and their significant others. Jules is also going to set her up on a date. Sonja says “I am interested to see Jules plans to set me up with.” John and Dorinda are the first to arrive at Sonja’s house for the party. Sonja has interns there to help her out. Jules and Michael show up with their friend Rocco, who is the mystery date for Sonja. Jules says “I love setting people up and I think that this is going to work out because Sonja is fun and exciting and Rocco is Italian.”

When  Sonja comes downstairs and sees Rocco she is very pleased. She says “I am very pleased to see Rocco because I didn’t think he would ever be interested in me since he knows everyone under the sun.” Everyone is impressed by Sonja’s table settings, especially Rocco. Dorinda says “Weren’t you proud of our friend last night? She found her voice.” John asks “What happened?” Sonja, Dorinda and Jules go on to recount the story. Dorinda says “You went in there to get a point across and it took on a life of its own.” Jules says “I have never met a woman who has problems with so many women. I’m not her therapist or anything like that, but maybe she needs help. I will never reveal anything personal about myself to either Bethenny or Carole again. I don’t trust them.” Everyone congratulates Sonja on a fabulous dinner party.

The next day the ladies climb on to Ramona’s party bus to head to The Mohican Sun. Bethenny says “Jules is on the bus and it is like there is a focus on the bus. I don’t even care. Let’s just have fun.”  Everyone is laughing and joking. Ramona says “Ok let’s have a great trip, I got us all suites so let’s have fun.” The news that LuAnn has gotten engaged to Tom broke on social media. The ladies all seem happy for her. Carole reads a text that she sent to her wishing her well. Sonja says “All of this happened while she was living with me and I am happy for her. I just don’t think she knows him well enough.”

Meanwhile, Jules is sitting off on her own with Dorinda. She tells her “I don’t know what makes Bethenny think I can’t hear her, or maybe she wants me to hear her. I don’t know and I don’t care.” Everyone continues having a good time. Bethenny apologizes to Sonja for the incident in her office over the Prosecco. Bethenny tells her “I always thought you were a good human being.” Sonja says “I needed this from Bethenny. When she said she forgave me it felt like a weight had been lifted off my shoulders. I needed that.”