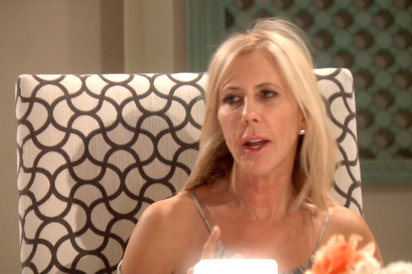 Tonight on Bravo The Real Housewives of Orange County RHOC airs with an all new Monday, August 29, season 11 episode 9 called, “Woo Hoo Weekend,” and we have your The Real Housewives of Orange County recap below. On tonight’s episode, while Shannon Beador heads to Cabo with David, Tamra Judge and Kelly Dodd join Vicki Gunvalson at the luxurious Merv Griffin estate in La Quinta, California.

On the last episode, after an explosive night at the sushi dinner, Heather and Tamra discussed Kelly’s volatile behavior as Kelly regretfully turned to her friend Meghan and receives some tough love.  Did you watch the last episode? We’ve got your detailed The Real Housewives of Orange County recap right here.

On tonight’s episode per the Bravo synopsis “while Shannon heads to Cabo with David, Tamra and Kelly join Vicki at the luxurious Merv Griffin estate in La Quinta, California to celebrate Vicki and Briana’s upcoming birthdays. Heather and Terry enjoy a date night dinner where they discuss his busy schedule and her problems with Kelly. Later, Tamra arranges a meeting between Kelly and Heather to work out their differences before the ladies head to Glamis.”

On this week’s episode of Real Housewives of Orange County David and Shannon are preparing to leave for their honeymoon in Cabo. They are packing up and getting ready to board the plane. Shannon says “This is the second set of rush packing I have done I have done in two days.”

Meanwhile, back in Orange County Vicki is making plans for her own birthday party. She sends out texts to all of the ladies inviting them to her party at the Merv Griffin Estate. However, everyone declines except for Tamra and Kelly. Vicki is disappointed in her friends, especially Shannon. She says “I wish Shannon and I could mend our friendship because I do miss her, but it is obviously not what she wants so I have to move on.”

When Heather and Terry return to Orange County they head out to dinner and have a talk about the state of their family. Terry tells his wife “I got a text from our daughter about one of her of her events and the Dad chair was empty. I understood what she was trying to tell me.” Heather asks him “What are you going to do about it?” Terry says “I know I haven’t been there for many of the kids events in the last six months, but I am going to change that. I am going to start coming home at a decent hour every night and not working on weekends so that I can be there for the kid’s events.” Heather does not look impressed. She asks him “Can we talk about Kelly now?” Terry says “No. Do we have to?” Heather shows Terry the text that Kelly sent her apologizing for her behavior at the Sushi restaurant. Heather says “i just don’t trust her.”

Meanwhile Heather is talking to Tamra at Vicki’s party about the incident as well, She tells her “I sent her a text apologizing to her. I don’t know what else to do, I want to be her friend, but she doesn’t seem very sociable.” Tamra says “You don’t know her. You two just need to sit down and have lunch and work this issue out.”

As the party continue the boys go to the window and look out Brianna says “They go to the window every night looking for daddy.” Suddenly they hear a car door slam and there is Ryan. Brianna is so shocked she can’t speak. She runs into his arms and the boys join in on the hugging.

Vicki is talking to Kelly about the trip to Glamis. She tells her “Tamra is worried that you are going to say bad words in front of the children on the trip, I told her that you wouldn’t because you are a mother too,” Kelly seems upset to hear this. She says “She is worried that I would say bad words in front of her children? I would never do that.”  Tamra calls Heather and tells her that Kelly doesn’t have a beef with her. Heather says “I know that. I have an issue with her making fun of me.”  Tamra says “I never should’ve  opened my big mouth,” Tamra says “Why don’t the three of us sit down and have lunch together?”  Heather says “I am willing to do that, but if it all falls apart it is on your head sister.” Tamra says “Being the peacemaker sucks. I just want everyone to get along.”

Everyone is having a great time playing in the pool when Meghan shows up at the Merv Griffin Estate. Meghan tells them all “I think I’m pregnant.” She shows them her little bump and then she tells them about the two embryos she had implanted.

Shannon and David are having a wonderful time in Cabo. She says “My second honeymoon takes me to a whole different level because this time, my husband did something special. He wanted to marry me.”

Heather is not excited about this meeting with Kelly but agrees to do it out of respect for Tamra. Before anyone says a word the tension is really thick. Heather addresses the incident at the Sushi restaurant. Kelly says “I am sorry for my language and behavior.” Heather says “I get up and I leave and then you imitate me. Why was that?” Kelly says “I did that because your language and behavior was inappropriate.” Kelly then tells Heather ‘vicki also told me that you don’t want me around your son.” Heather says “I wanted us to get together and talk because I didn’t want to have another freak out like that in front of children.” Kelly says “I do not behave this way unless my integrity is being attacked. I don’t go around attacking people.” Heather apologizes and the ladies reach a tenuous truce for the trip…