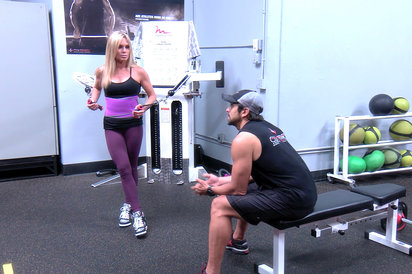 Tonight on Bravo TV the original housewife series, The Real Housewives of Orange County returns with an all-new Monday, September 12, 2016, episode and we have your RHOC recap below.  On tonight’s season 11 episode 11 called, “The Moral Minority,” Tamra Judge considers postponing her fitness competition.

Did you watch last week’s episode where Tamra Judge, Vicki Gunvalson, Heather Dubrow and Kelly Dodd traveled to Glamis to celebrate Eddie’s birthday?  If you missed it and want to get caught up we have last week’s Real Housewives of Orange County recap, right here for you!

On tonight’s RHOC episode as per the Bravo TV synopsis, “As the women recover from the accident in Glamis, Tamra Judge returns intent on carrying on with the trip. New alliances form in the wake of Meghan King Edmonds and Shannon Beador’s refusal to visit Vicki Gunvalson at the hospital. Back in the OC, Tamra contemplates postponing her fitness competition. While Meghan goes to Vicki’s house to make amends, Shannon attempts to get back into her friends’ good graces.”

This week on Real Housewives of Orange County Tamra is leaving the hospital three hours after the accident. She doesn’t want to sit in the car for three hours so she decides to head back to camp. She calls Heather and tells her that she and Eddie are on their way back.

Shannon finally shows up to Meghan and Jim’s house in Palm Springs. Meghan reveals her pregnancy to Shannon and David and they head off to play golf. While they are on the golf course Meghan reveals the details of the accident. Shannon is appalled. She says “Why did Meghan wait so long to tell me this?”

Heather calls Shannon and tells her that Vicki is at the hospital by herself. Shannon says “I don’t know what Heather is expecting of me. Vicki and I are not friends. She has been nothing but horrible to me and I am not going to the hospital until I know she needs me.” The call drops and Heather calls her back. Meghan says “It is a 45 minute drive for you guys to go to the hospital so you guys should go because you’re her friends.”

Kelly and Heather hare appalled by Meghan  and Shannon’s attitude about the accident. Kelly says “I can’t believe how they are acting. I would go to see someone if they were all alone in the hospital whether they were my friend or not just out of human decency.” Meanwhile Shannon tells David “They want me to go see Vicki in the hospital.” David tells her “I doubt Vicki would come see you if you were in the hospital. Tell them no and let’s go play golf.”

Tamra and Eddie return to camp. Kelly tells her “I kept thinking that you or viki would be a paraplegic.” Tamra tells them “I do have a bulging disc in my back.” Heather tells her about the conversation about between her, Kelly,  and Shannon. Tamra is angry.

Back at Meghan’s house Shannon and Meghan are still angry that Tamra and Kelly implied that they should go see Vicki. Meghan shows them some pictures from the accident and Shannon is appalled. She says “Wait a minute. Someone was taking selfies while they were loading you into the helicopter? If I were being loaded into the helicopter taking a selfie would be the last thing on my mind.”

Back at camp the ladies decide to FaceTime Vicki to check in on her while she is in the hospital. She tells them “I hope to get out of here soon.” The ladies tried to cheer her up.

Meghan and Shannon call Tamra to check on her and see how she is feeling. Tamra tells them what happened in the accident. Then she tells them “I can’t believe that not one of you could go and check on Vicki. She had to have her clothes cut off of her. She went home in a paper gown in an Uber at 1 in the morning.” Meghan and Shannon are both stunned to hear the news. Meghan starts to speak and Tamra cuts her off and tells her “Go to Hell.”

Meghan and Jim are talking. Meghan tells him “I think it might be a good idea to go and visit Vicki. What do you think?” Jim says “I have a whole different philosophy about the situation. I think it’s stupid and asinine. I’m out.” Eventually Meghan does decide to go visit Vicki. Vicki tells her “I don’t know why it takes a near death experience to elicit compassion.” Meghan starts to cry. Vicki tells her “Tamra told me that you said that they were my friends and you weren’t.” Meghan admits to saying it, but says “I only said it because they were badgering me.” Meghan apologizes to Vicki and they hug.

Everyone is now home from Glemmis. Heather stops by to visit Vicki. Vicki tells her about Meghan’s visit. Heather is shocked to hear that Meghan drove all the way from her house to Vicki’s when she wouldn’t drive to the hospital to see her. When Kelly arrives Vicki fills her in on the visit as well. Kelly is also surprised. Tamra is also there. Vicki tells them “Meghan thought that Heather was being theatrical.” Vicki becomes emotional thinking about it.

Heather and Tamra meet up with Shannon for dinner. Shannon tells them “Meghan waited until we were on the golf course to tell me.” Heather and Tamra are appalled. Heather says “Neither one of you could go bring Vicki a pair of sweatpants and you want to point the finger at me?” The argument continues. Heather says “I can’t understand why you aren’t more annoyed at Meghan.” Shannon says “Well she is pregnant and hormonal.” This appalls both Heather and Tamra. Heather says “Are you mad now because Vicki really is the victim?” Heather  tells her “When I sit down with Meghan tomorrow if she tries to turn this around there is going to be a serious problem.”

Shannon is inventorying the furnishings in her house to prepare it for sale. While she is doing so she decides to finally call Vicki. Her call goes straight to voicemail. She leaves a message asking Vicki to call her back.