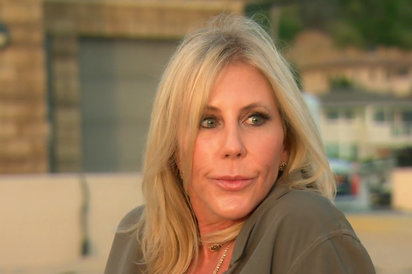 On the last episode, while Heather traveled to Turks and Caicos to help Terry reconnect with their kids, Tamra tried to save Ryan and Sarah’s relationship.

On tonight’s episode per the Bravo synopsis “Vicki and Briana take a road trip from Oklahoma to Orange County when Vicki finally gets her wish, her daughter is moving back.  But Briana’s homecoming is not all that Vicki hoped. Meghan faces her fear of needles head-on when she begins her IVF shots without Jimmy, as Heather struggles with her children’s expectations about how much they see their father. Kelly throws a beach party to get to know all the women better and Vicki and Tamra pull their heads out of the sand to try and resolve the issues that have plagued them for the past year.”

Tonight’s episode is going to be filled with more crazy housewife drama that you won’t want to miss, so be sure to tune in for our live coverage of the show tonight at 10 PM EST! While you wait for our The Real Housewives of Orange County recap hit the comments and let us know how excited you are about this evening’s The Real Housewives of Orange County recap!

On this week’s episode of Real Housewives of Orange County Meghan is preparing for her in vitro fertilization and making a video diary for her husband Jim while he is away at Spring Training in Florida. She says “I am facing my biggest fear in needles without my husband. She gives herself the injection of hormones and says “I did it. I am so proud of myself.”

Shannon is preparing to move as their house is in escrow. She worries that they are not going to be able to sell it because they have been in escrow a bunch of times and each time it has fallen through. She says “We bought this house at the height of the market and now the market has fallen out and we are having a hard time.” Shannon meets with her realtor to talk about what they are looking for in a new house. She tells him “We want something smaller because this house is too big for us. We also want something in the same neighborhood.” The  realtor heads off knowing what they are looking.

Vicki and Brianna are on the road from Oklahoma. As they are driving they comment on  the lack of scenery. As they are driving they start to see cows and comment on how cool it is. Suddenly they are assaulted by a really bad odor. Then  Vicki’s grandson tells them they have to stop because he has to go to the bathroom. Brianna tells him “Well you have to hold it.” Troy tells them “I can’t.” So they pull over on the side of the road and let him go to the bathroom.

Meghan calls Kelly to tell her that she won’t be able to go to the  party tonight. Kelly tells her husband “I feel a little nervous without my security blanket there.”  He tells her “You’re not shy so don’t worry about it.”

Brianna is having a hard time on the road. She tells her mother “All i do is make sure people eat and go to the bathroom. I don’t feel good right now. I don’t feel good.” They talk about stopping for the night at a hotel. Brianna says “I don’t want to do that because we only get a little bit of rest and then we have to get back in the car. I just want to get it done and get home.”

While the ladies are out they Heather tells them “So you know Terry and i have been writing a book. We have been guinea pigs for all kinds of treatments and the book will soon be finished. I wanted to have a party to celebrate the release of the book, but my house isn’t ready  yet.” Kelly mentions having a beach party. Shannon tells Heather “Kelly had lunch with Vicki. Heather seems stunned to hear this. They tell Kelly about the fact that Vicki always plays the victim.     Heather asks her “Did you know Vicki before my boat party?” Kelly says “Yes, we knew s each other through our makeup artist Roxanne.” Shannon says “Kelly doesn’t know anything about Vicki and the situation so she needs to stay out of it.”

When Vicki, Brianna and Troy get home Vicki has to rush Brianna to the hospital. She has developed a bad infection in her leg. When she comes home Vicki tells her that they have been invited to a beach party. Brianna now has an iV in her arm to administer antibiotics at home and the Drs. have set up home health care for her. Brianna says “i moved back to Orange County because my mom hates to be alone. I also moved back because I need her right now, but she is off to work. I don’t even ask her to stay because I know she won’t.” Vicki says “I just bought Brianna a house. Money doesn’t grow on trees. I hate to leave her but I do have to go to work.”

Heather and Terry are anxious to get out of their rental home and into the house, they have been working on for the last two years. Heather and the interior designer are talking about the pizza oven and the barbecue that Terry wants. Heather says “I don’t even eat pizza, but a pizza oven is essential.” She is also upset because Terry has not really been hands on when it comes to building or decorating this house.”

Kelly prepares for her beach party. As they are setting up the ladies begin to arrive. First to arrive is Meghan. Kelly is happy. She says “I knew you would be first.” Meghan asks her “Who’s coming?” Kelly tells her “We invited Vicki and Brianna, but I don’t know if she is going to come. Everyone is there when Vicki arrives. Vicki says “I am tired of getting the cold shoulder from these women. They are not going to dictate what events I go to.”

Heather is the first person to say something to her. She asks her “How’s Brianna?” Vicki tells her about the infection in Brianna’s leg and her having to go back to the hospital. Everyone is having a good time playing volleyball and football at the party.

Vicki is sitting off by herself. Tamra goes over to talk to her. Vicki tells her “I miss my friends, but i feel like you all turned away from me, especially you.” Tamra asks her “How did I turn away from you?” Vicki goes on and on about how everyone doubted her story about Brooks. Tamra tells her “You need to apologize to those women over there and they will take you back.” The argument continues and Vicki tells her “I think all of you were in on trying to bring Brooks down.” This makes Tamra extremely angry.

Tamra tells her “you’re right, i didn’t like him because he is a liar and you lied to.” Vicki says “I didn’t lie. I guess my love for Brooks made me blind to what all of you were seeing, but I chose to believe the man I was in love with.” Tamra grows angrier and  more frustrated as the conversation goes on. She tells her “After all the lies were exposed you chose him over us.” Vicki cries. Tamra tells her “Do you ever think it is just you being stubborn? I don’t want you to be stubborn,i just want you to be Vicki.” She breaks down and says “I need to talk to Heather, Meghan and Shannon.” Tamra tells her “Just do it.”