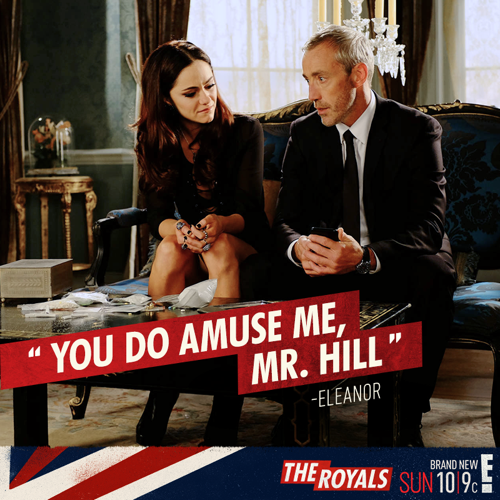 The Royals continues tonight with an all new Sunday, January 10 season 2 episode 9 called “And Then It Started Like a Guilty Thing,” and we have your recap below. On tonight’s episode, questions swirl about the king’s killer and we will inch closer to revealing the actual killer.

On the last episode, relationships were forever changed when the royal family’s history was called into question. The episode switched between two timelines. The past depicts a woefully tragic love story between King Simon and Dominique, the present was filled with Machiavellian schemes among the people of the royal household. Did you watch the last episode? If you missed it, we have a full and detailed recap right here for you.

Jasper has recently caught on to the fact that there could be more behind the late King Simon’s death and last week he even found evidence to prove that Lucius was innocent of the crime. However, this week someone noticed that he had been snooping around. And, unfortunately for Jasper, Ted the actual murderer was quickly unraveling just as fast as Jasper’s investigation.

Ted had apparently noticed someone had downloaded an image from the security feed and he was able to trace it back to Jasper. Who he knows has gotten especially close to Liam in the last couple of months. So Ted called Jasper into his office and he warned Jasper away from investigating the late King’s death. He said was a waste of valuable resources and that it was putting state secrets at risk.

And something about that last part just didn’t sit right with Jasper. He knows Ted as a usually calm man particularly during a crisis and, during their meeting, Ted was simply all over the place. With both his reasoning as well as his demeanor.

Though, how was Jasper supposed to know that lately Ted has been struggling to maintain a conversation with real people as well his dead wife. And that his dead wife was trying to act as Ted’s conscience. Constantly reminding him about how it had been no one else’s fault that she had died and that he couldn’t keep blaming the monarchy.

But all in all Ted was simply losing it and Jasper had seen a little bit of that for himself. Thus he told Liam about what Ted had said. And the two of them were going to find a way around Ted.

Only Eleanor didn’t approve of Liam’s suddenly close relationship with her ex and she had gotten really close to telling him not to trust Jasper when her friend called asking for friend. Though Eleanor’s friend Imogen had in fact wanted to score some drugs off of Eleanor, but when Eleanor said she didn’t have any on her, she begun to see that something was off with Imogen. Imogen had been acting strange when they met and Eleanor eventually heard that her friend had gotten mixed up with someone that was allegedly bad news.

Yet at least Imogen wasn’t inviting suspected murders into the family home. Now that was Queen Helena. Helena had arranged for Lucius to meet her at the palace and, once he arrived, she quickly informed him that he hadn’t murdered her lover. And that she didn’t think he had killed her husband either.

Honestly, the queen didn’t know who killed her husband but she knew it wasn’t her most trusted servant. So she wanted to get the charges against Lucius dropped and she would have done it too. But Lucius told her not to.

He said the monarchy couldn’t handle another scandal and that rather spend the rest of his life behind bars than watch the beloved institution disbanded. And surprisingly that gave Helena her next idea. She then went over to Prudence’s place and she tried to talk the other woman out of marrying Cyrus.

Helena said he was a very dangerous man and that Prudence should seriously think about whether or not she wanted her son to become royalty. Apparently royals aren’t the happiest lot and Helena wanted her to know that before she sacrificed firstborn. The queen had already lost her own firstborn so she knew what she was talking about.

But the one thing that Helena was sure of was that she wasn’t going to run away. And that decision wasn’t based on anything Prudence might do. It was just fact.

And when Eleanor’s friend called again, she knew without a doubt that Eleanor would show up and she was right. Eleanor did go riding to her rescue and she called for backup when Imogen’s abusive boyfriend showed up trying to stop them from leaving the hotel. So it was Eleanor, James, and Jasper that protected Imogen and it was Imogen that finally got herself out of a nasty situation.

She ended up breaking up with Viktor because she realized she deserved better for herself.

Although after he helped but was then turned down by Eleanor, Jasper went back to the original scene of the crime in order to find footage of the night King Simon was stabbed. And he did. He found footage that had gone unnoticed by the police yet showed Ted stabbing the King.

So Jasper had found the murderer but Liam wasn’t ready to listen to what he had to say. His sister it seems had finally told him the truth about their birthday party after the incident with Imogen and therefore Liam was in the middle of beating on Jasper when Jasper said the now infamous words. He said “I know who killed your father”.

And that more than anything will be just enough for Liam to stay.

Earlier the Deputy Prime Minister had offered him a job but Liam wasn’t going to take it before and sure won’t want it now.