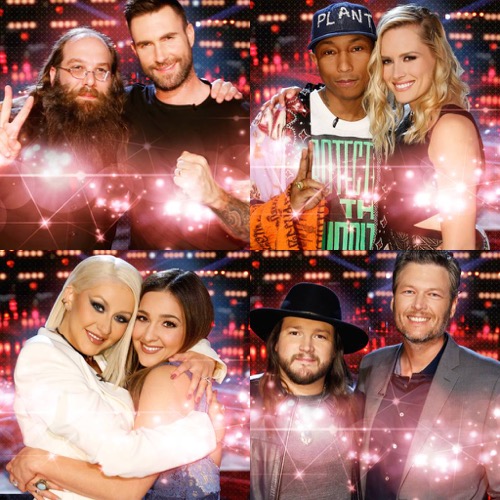 Tonight on NBC the Emmy award winning music competition The Voice continues with an all new two hour Tuesday May 24, season 10 finale called, “Live Finale, Part 2,” and we have your weekly recap below. On tonight’s episode the winner is revealed in the conclusion of the two-part Season 10 finale.

On the last episode, in the final phase of the competition, the final four artists performed live in front of coaches Christina Aguilera, Adam Levine, Blake Shelton and Pharrell Williams. Did you watch the last episode? If you missed it we have you covered with a full and detailed recap right here for you.

On tonight’s episode as per the NBC synopsis, “It’s the season finale of “The Voice,” and host Carson Daly (“TODAY Show”) will reveal who America has chosen to be the winner. Christina Aguilera, Adam Levine, Blake Shelton and Pharrell Williams star as the celebrity panel of coaches. Who will become The Voice this season?”

Tonight’s season 10 finale is going to be exciting. We’ll be blogging it right here for you. In the meantime hit up the comments section and tell us your thoughts on who the winner of The Voice season 10 will be.

#VoiceResults starts with a performance by Little Big Town singing One of Those Days. Pharrell joins them on stage and sings along since he produced their new album. Now we see a look at Hannah Huston’s journey with Pharrell.

Hannah says they have such a strong bond and she’s still star struck by him. Pharrell says she’s cute and makes funny faces all the time. He says she has the best outlook. She says Pharrell told her it’s okay to be weird and funny. Hannah sings Crazy with guest Cee-Lo.

They did a weird remix of the Gnarls Barkley song and are performing with a Mariachi band – so odd yet very cool – very Hannah. Next is Alisan Porter’s bring-back performance and she chose Kata Hay, Paxton Ingram and Scott Quinn to sing Heart’s Straight On. They rock it.

Next we see Christina’s new obsession SnapChat and says she does face swap with all the coaches. She says it may annoy the guys but she doesn’t care. We see some of her stuff with putting Blake and cows on Blake and Pharrell, Adam and Carson in funny filters.

Adam says Christina is the queen of The Voice. The guys say she can be mischievous and we see her in some funky filters too. The Snapchat montage was cute. Laith gets to perform with one of his idols the amazing Joe Walsh.

They shake the house to the core with their guitar and vocal stylings on Rocky Mountain Way. It was like looking at a before and after since Laith’s voice is a lot like Joe’s was when he was that age. Their guitar skills are mad awesome.

Next we see a look at Coach Blake with Adam Wakefield. Adam says Blake tries to get him to crack up on camera. Blake says Adam is funny and he’s never met anyone like him. Adam says he and Blake have gotten close but sometimes too close and we see Adam trying to give him a weird hug.

Adam says it doesn’t feel like work with Blake and he owes a lot to him and says he thinks Blake thinks he has a shot to win it. Now Sia comes out and performs her new song Cheap Thrills. Looks like that’s Maddie Ziegler dancing which is funny because her show Dance Moms is on right now too.

The final four and their coaches talk about what a win would mean. Laith says he’s been playing in bars a long time. Hannah says she never thought she’d go this far. Alisan says she was happy to pursue her dream. Adam says to get all the way there on American’s votes is mind blowing.

Alisan says she had the time of her life and is grateful. Christina says Alisan is the definition of The Voice. Pharrell says he loves Hannah. Adam says he’s so proud of Laith. Hannah talks about showing her students they can do whatever they want.

Now Adam duets with 27 time Grammy winner Alison Krauss singing Willing. It’s a beautiful ode to country classic. Then Carson shows what he’s calling Adam Levine’s life story. It talks about him growing up on the mean streets of Brentwood and gave it up when he found out he was a short Jew.

We see his dad Fred saying Adam wasn’t too bright so he was glad he found music. Christina says she worked with Adam on Moves Like Jagger because she lost a bet. We see a montage of Adam’s tattoos and Blake insults them.

Then we see a montage of Adam begging artists to be on his team and then him loving all over Blake and his losing streak on the show. Blake says the bromance is over and we see Blake laughing in his face. Shaq says even if Adam was taller, he’d still suck.

Next is Hannah Huston’s bring-back with Bryan Bautista, Brian Nhira, and Caity Peters. They are doing Adele’s When We Were Young. Their voices are amazing together and individually. A very nice take on a difficult song – Adele is big shoes to fill and they do so well.

Now we take a look at Blake Shelton’s past 10 seasons on the show. Carson says Blake makes bad bets. We see him betting Pharrell that the audience will sing one of his songs. He loses that one. It’s crickets. Blake says he doesn’t have a blaming problem.

We see him betting Carson on hot sauce and betting with Pharrell on Adam balancing a drumstick on his nose. He loses and has to dress like Pharrell. He looks insane. Then they make fun of Christina with four drinks and he and Adam Wakefield bet which she’ll drink first.

Blake bets Pink that Hannah and Pharrell are in matching colors and Blake has to put lipstick on that’s called Lady Danger. It’s a cute montage. Now we see Zayn singing Like I Would from his new album. The crowd goes insane for the guy.

Next is Blake performing his new song She’s Got a Way With Words. Laith’s bring-back is Katie Basden, Owen Danoff and Shaylah Fearing doing Georgia on My Mind. Of course, it’s brilliant with Laith killing on the guitar and the song stylings of the others he brought back. Shaylah and Katie wailed!

Next is a package about Pharrell doing story time with kids. They’re little bitty. He reads them Maroon 5 Animals. He reads the weird lyrics from the song and the kids run amok. He then reads them Genie in a Bottle by Christina. He doesn’t say rub me the right way.

Then he does Boys Round Here by Blake Shelton. A girl asks him what’s a redneck. One girl says her daddy likes beer too. The kids all start spitting like the lyrics said then ask if they’re done. Now we look back at Laith and Adam.

Miley talks about Laith’s beard. Laith says he talks to his beard and conditions it. He says the glam squad grew on him and Adam says he loves classics and says he made the right choice in Adam because he gave him freedom to be himself.

Then it’s a duet by Alisan Porter and Jennifer Nettles from Sugarland singing Unlove You. It’s amazing. Their voices complement each other nicely. Alisan could sing country, pop, the phone book, anything. It’s amazing.

Then Carson says he drove the finale artists to rehearsal. He loads them into a car and drives off. He turns on some music and it’s Satisfaction. They all sing along. He takes them to pick up their brand new cars and the coaches are there as fireworks go off.

Adam Wakefield is doing his bring-back with Nick Hagelin, Mary Sarah and Justin Whisnant. They perform Give Me Some Loving. They bring down the house with their number and the crowd loves it. Next is a medley of Into You and Dangerous Woman is Christina with Ariana Grande.

Christina and Ariana are amazing together and they both sing their faces off. Then we see a look at Alisan’s journey with Christina. Alisan says Christina was the perfect coach for her. She says Christina is a mom too and doing what she wants to do.

Alisan says they relate on so many levels. Christina says their rehearsals are fun and Alisan is the real deal and makes her laugh. Alisan says she adores Christina and a mentor. Alisan says Christina showed her she can have her family and career and do it all.

Now we found out the fourth and third place. Laith Al-Saadi finished in 4th place. Hannah Huston finished in 3rd place. Alisan Porter WINS – that means Coach Christina Aguilera is the first female coach and they go nuts screaming together.

Alisan sings Down That Road, her original song, and she struggles to perform because she’s crying. Christina hugs Alisan’s husband and kids and mom.