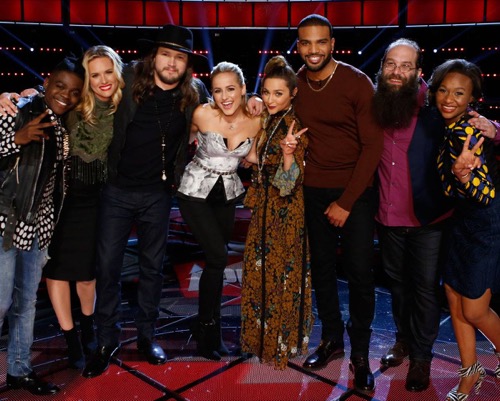 Tonight on NBC the Emmy award winning music competition The Voice continues with an all new Monday May 16 season 10 episode 24 called, “Live Semi-Final Performances,” and we have your weekly recap below. On tonight’s episode the Top 8 artists perform.

On the last episode, Nick Hagelin and Paxton Ingram were in trouble as they were up for elimination. In the end Payton Ingram was saved. Did you watch the last episode? If you missed it we have you covered with a full and detailed recap right here for you.

On tonight’s episode as per the NBC synopsis, “world-renowned recording artist P!nk will serve as superstar advisor for the eight semi-finalists. The top eight artists perform live in front of coaches Christina Aguilera, Adam Levine, Blake Shelton and Pharrell Williams for America’s votes.”

Tonight’s season 10 episode 24 is going to be exciting. We’ll be blogging it right here for you. In the meantime hit up the comments section and tell us your thoughts on season 10 of The Voice so far.

#VoiceLive tonight features Pink as a special advisor to the top eight. First up is Team Adam’s Shalyah Fearing. In rehearsal, she gives Pink goosebumps and she says she loves her rasp and it’s the most beautiful voice she’s heard in her life.

Shalyah does And I’m Telling You I’m Not Going from Dreamgirls and she absolutely kills it. The coaches are on their feet and Christina says wow, she was singing for her life and says it means so much to her how fearless she was. She says that song is not easy and she brought it.

Pharrell says it was a lot for a 16-year old to communicate and calls it unbelievable. He says she showed endurance to hold that note in the middle then keep on. Coach Adam says he’s always impressed by her and he’s overjoyed they had this big moment and says she deserves to be in the finale.

Now is a duet of Adam Wakefield and Alisan Porter singing a duet of Angel from Montgomery. He plays guitar and they sing together. It’s very nicely done – they were a good pairing and Alisan has a good ear for country.

Team Blake’s Paxton Ingram is next and is thrilled to meet Pink. Paxton is riding high off his Instant Save and has chosen I’d Do Anything for Love by Meatloaf. Pink says attempting a Meatloaf song is b*allsy and she couldn’t sing one of his.

Christina says she wouldn’t have expected him to choose Meatloaf but he pulled it off and says he’s energetic and she was entertained. Pharrell says he took it to the next step and says it was very theatrical and thinks he’d be good on Broadway.

Coach Blake says oh my gosh, he’s never been more proud of an artist that he’s worked with on the show. He says he doesn’t know anyone who works harder than Paxton at always making it the best performance he can do.

Next is Team Adam’s Laith Al-Saadi and he is thrilled to meet Pink. Laith is doing Adele’s One and Only. Adam says he’s such a diverse talent and says his voice is the most distinct in the competition. Pink says he loves his voice. The crowd digs it.

Blake says that was amazing and calls it beautiful singing and the guitar solo worked. Pharrell says pay attention to Laith’s success story on the show. He says there is no record company involved – just Laith, the show, the audience and his music.

He congratulates him and says it was another great installment. Coach Adam says he would be most proud of he made it through because he represents something near and dear to his heart and says he stays true to who he is and he thinks Laith is so different and it would be an honor to get him to the end.

Next is a duet of Bryan Bautista and Mary Sarah singing Ariana Grande’s Break Free. It’s a very different look and sound for Mary Sarah in particular and was a great choice. Team Christina’s Alisan Porter is next and Pink calls her Curly Sue and ran to hug her.

Alisan is doing Desperado by The Eagles. Christina says it’s never been done on the show and knows she’ll do it justice. Pink calls it the bees knees. Pink says it was so good she made her hands sweat. Alisan takes the stage and sings the 70s classic. She slays and the audience shows much love.

Adam says she can do everything and someone who wins this show must be able to do that and have all the tricks in their bag and says she also connects emotionally to the song and audience. Blake says he looks forward to whatever she does because it’s incredible.

Blake says that’s one of his all-time favorite songs and she made it her own and calls her awesome. Coach Christina says she’s speechless when it comes to her and says she has pride and admiration for her talent and gift. Christina says it was epic.

Next up is a duet by Hannah Huston and Laith Al-Saadi doing Knock on Wood. The duet rocks the house then it’s Team Blake’s Adam Wakefield who has chosen I’m Sorry by Blake Shelton. Blake is happy that he chose the Chris Stapleton-written song and Pink says it seems too easy for him. Adam gets Pharrell up on his feet and Blake too.

Pharrell says he doesn’t feel like Adam is competing and is just sharing his music with America and says he picks crazy songs and is so accurate and brings a different kind of soul to country music and Blake’s team. Adam Levine says when the audience gets quiet, it’s because they are so taken by what he’s doing and he blew them away.

He says they were so moved, they just held still. Coach Blake says he’s embarrassed that he ever sang that song after Adam’s performance. Adam Levine says it’s like his but better. Blake calls that a breakout moment.

Team Christina’s Bryan Bautista is up next. He’s chosen Christina’s song Hurt and says this is about his dad not being present in his life at the moment. Christina tells him to do his own thing with it. He takes the stage determined to pour his heart into it.

Bryan has all the judges but Adam on his feet by the time he’s done and his mom is crying. The crowd goes nuts. Adam says he’s always been an impressive singer but it takes a lot of courage to be in touch with your emotions like that. He says that’s not easy and he did a really great job.

Coach Christina says every time he performs, he shows a different element of himself and that was incredible. She says she swore she wouldn’t sing the song live again because it’s crazy with the range and now she wants to hear him sing it again.

Next is another duet – it’s Paxton and Shalyah doing Masterpiece by Jessie J. Team Blake’s Mary Sarah is the next artist to perform solo. She’s chosen I Told You So by Randy Travis. Pink is a fan of traditional country and says it’s beautiful and says it’s honest and that’s what she wants to feel.

Christina says it was beautiful and she wanted to be in the curtains with her and says she’s grown a lot and is really owning who she is and calls it absolutely beautiful. Coach Blake says he wants people to YouTube Mary Sarah when they ask what’s good in country music right now. He says it’s her best.

Next up is Hannah Huston who is doing the Percy Sledge classic When a Man Loves a Woman. Pink and Pharrell encourage her to dig deep. Hannah says music is freeing. She takes the stage and does a wonderful rendition of the song.

The crowd loves it and Adam is first with the comments. He says she’s one of the most consistent people they’ve ever had and says a week before the finale and she’s really killing it. Blake says he agrees with Adam and says she’s not had anything like that.

Blake says it’s a perfect time to pull out a card like that. Coach Pharrell says it’s been a slow build and says she knew she had something and now she knows she deserves to be there and is singing and doing her best. He stands and the crowd cheers.

Vote now and come back to CDL tomorrow for the live results show.