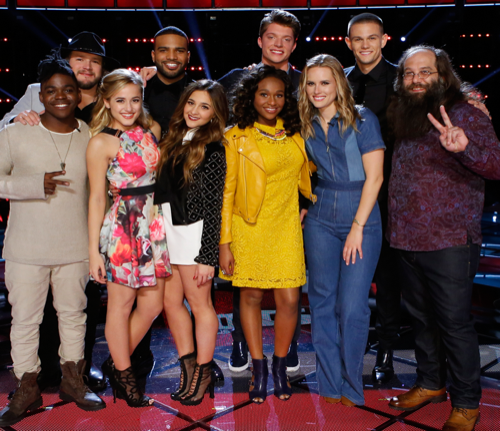 Tonight on NBC the Emmy award winning music competition The Voice continues with an all new Monday May 2, season 10 episode 20 called, “Live Top 10 Performances,” and we have your weekly recap below. On tonight’s episode the Top 10 artists perform.

Tonight’s season 10 episode 20 is going to be exciting. We’ll be blogging it right here for you. In the meantime hit up the comments section and tell us your thoughts on season 10 of The Voice so far.

#VoiceTop10 starts with Michelle Obama and Jill Biden are there as are a bunch of special service men and women as guests. May is military service appreciation month and they talk about their Joining Forces charity. FLOTUS then introduces the top 10 singing Home.

First up is Team Pharrell’s Daniel Passino who won the Instant Save last week. He’s doing I Don’t Want to Miss a Thing by Aerosmith and he and Pharrell work on tweaking his performance. Daniel takes the stage and does a nice job.

Adam says he likes this song and talks about how it was Aerosmith’s first big number one song and came late in their career. Adam says he did a good job. Former coach Christina says he has passion and put his heart and soul into that.

Christina says she heard some pitch moments but the passion made up for it. Coach Pharrell says he heard pitch issues and was thinking if you were living in the moment to give your best and says the big note was under and he pushed it. Pharrell says it was a big save and tells him congrats.

Next up is Team Adam’s Shalyah Fearing who is singing My Kind of Love by Emili Sande and she and Adam work on this. He says she’s one performance from a breakthrough. She performs her song and gets a good reception from the crowd.

Blake says she almost blew his hair piece off and says he loves her going back to that type of performance and says when she’s edgy and ragged and wild, it’s where she thrives and she bought herself more time. Pharrell says it’s so cool to witness her passion.

He says she’s on fire on the inside and shares it with them. He says her spirit is present in the now. Coach Adam says it was an excellent job and says she’s a favorite because she has the ability to do well. He says vote her through because he has a Mary J Blige picked out for next week.

The next artist to perform is Team Christina’s Nick Hagelin. He’s singing I Can’t Help It by Michael Jackson. He gets big cheers from Christina when he’s done performing and then he gets judge comments starting with his former coach.

Former coach Pharrell says those are big shoes to fill since it’s Michael Jackson but says it’s important for him to be there to inspire people. He says he represents possibility. He says it was good. Blake says he wondered how long he could stay in the box and not dance.

Blake says he sounded a lot like Michael in his vibrato and he did a good job. Coach Christina says she’s happy that Blake made that nod and says she heard him sounding like Michael too. She says she loved this and says American has improved him by voting him back every week.

Hannah Huston is up next from Team Pharrell and she’s doing Rolling in the Deep by Adele which is ambitious. She knows it’s hard since Adele is magnificent. Pharrell gives her some notes on her performance then she’s ready. Pharrell is on his feet by the time she’s done.

Adam says he’s a fan and her trajectory is amazing and she keeps getting better. He mentions one technical note from the original. He says it was 99% amazing and he’s a stickler and a jerk so it was just great.

Pharrell says that was 1000% amazing and says her notes, hands and everything was perfect. He says it’s so sick what she did. He says people felt healed and says her growth is enormous. He says everyone was standing up and says America vote this amazing girl through.

Next up is Team Adam’s Laith Al-Saadi who is singing The Thrill is Gone by BB King and is excited to be doing blues this week. Adam says he’s been wanting him to do this for a long time and says he does more than justice to this.

Adam and Pharrell are both on their feet when he’s done. Blake says his guitar playing is incredible and says he’s a fan but cautions him to sing more than play and says that was 50/50 and they need to hear his voice. Adam says he hears Blake’s concerns.

Adam adds that was by far the best show of musicianship he’s ever seen on The Voice. Adam says the music and voice work in tandem and make him extraordinary. Adam says he the most well-rounded person in the competition and is incredible.

Next is Team Blake’s Paxton Ingram who is singing Celine Dion’s It’s All Coming Back to Me. Blake says he had a huge breakout moment last week and is a really good singer. They talk and Blake shares some performance notes then he takes the stage.

Blake is on his feet and Christina says that brought her back to her audition days and says it was awesome and she loved the drama and compliments his presence. She says Celine is a whole different thing but he made it his own and she was pleasantly surprised.

Coach Blake says he can’t even look at him without smiling and says what’s happening with him now is the reason he does this job and says he’s becoming this artist before their very eyes. Blake tells him it was incredible and he’s so proud.

Next up is Team Blake’s Mary Sarah and he congratulates her for topping iTunes country chart. Tonight she’s doing Tammy Wynette’s Stand By Your Man. Blake says he’s pleased she’s doing this traditional song but says it’s difficult. Blake is cheering and on his feet when she’s done.

Adam says that was amazing and says it’s a major song and difficult in all ways. He says it feels like this was in the zone of who she was but she can sing anything. He says nothing fit quite as well as this and calls it an amazing performance.

Blake says she just engaged the entire country audience singing that and blowing the roof off, it’ll be good. He says all these soldiers really liked her. Blake says it’s going to be a good night for her and the audience and soldiers join in the hooting.

Team Christina’s Bryan Bautista is singing Promise by Romeo Santos featuring Usher. He’s happy to be doing a Latino song and says it’s for his mother. Christina says this is a risk and he’s experimenting and she hopes he gets love for it.

Pharrell says bro, come on, that was awesome. He says the Latin community must be losing their minds right now. He says he did it on this show while competing and showed so much vocal ability was awesome and says it was amazing.

From Team Christina, Alisan Porter is next and she’s doing Let Him Fly which the Dixie Chicks have covered and so has Jessica Simpson. They talk about her emotions behind this song and Christina is happy that she’s doing a stripped down song.

Adam says that they focus on voice so much but she used everything in her life to do this and calls it a defining thing about artistry. He says it’s commendable and she’s amazing. He says good job, great job. Blake says he already loved her before.

He says now she did country and he really really really loves her. He says that was such a smart move and got to him. Coach Christina says she’s so happy and so proud of her for being courageous and showing her vulnerability. She says she pulled the curtain back on her truth and calls it commendable.

Team Blake’s Adam Wakefield will close the show out tonight with I Got a Woman by Ray Charles. He says in the package that he’s dedicating this to his GF who is also a singer. He and Blake work out the kinks then he takes the stage and pays the piano and sings.

All but Christina are on their feet for him when he’s done. Pharrell says man he can’t wait to hear the album he makes with Big Machine and says he’s the next one and says the piano solo in the middle was amazing.

Coach Blake says ah-damn and then says it’s unbelievable. He says he just literally “blowed” my brains out. He says that was his favorite performance of the night.