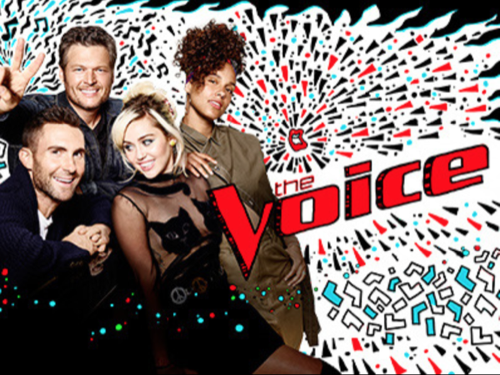 Tonight on NBC’s Emmy Award-winning musical competition The Voice airs with an all new Monday, September 19, 2016, season 11 premiere and we have your The Voice recap right below.  On tonight’s The Voice premiere recap joining Adam Levine and Blake Shelton this season on the judge’s panel are Miley Cyrus and Alicia Keys.

Did you watch last season’s finale where Laith Al-Saadi, Adam Wakefield, Alisan Porter and Hannah Huston were battling to win the crown of The Voice?  If you missed it we have a full and detailed The Voice recap, right here for you!

On tonight’s season 11 premiere of The Voice as per the NBC synopsis, “In the season premiere, the competition is fierce, the talent is unparalleled and the surprises abound as coaches Miley Cyrus, Alicia Keys, Adam Levine and Blake Shelton all vie to discover and coach the next singing phenomenon from the country’s best vocalists in the “blind auditions.”

Tonight’s series premiere of “The Voice” kicks off with alum coaches Adam Levine and Blake Shelton taking the stage, along with two new coaches, Alicia Keys and Miley Cyrus.

It’s night one of the blind auditions. The first contestant singing tonight is 21 year old Jason Warrior from Chicago, Illinois. Jason is from a pretty rough neighborhood in Chicago, but he was blessed to receive a scholarship to the University of Illinois.

Jason Warrior takes the stage and sings “Living For The City.” It’s not long before Adam Levine hits his buzzer and spins his chair, followed by Alicia Keys. Miley and Blake don’t turn their chairs. When Justin is done singing, the coaches praise him. Adam jokes that he doesn’t have a chance of getting Jason on his team since Alicia turned her chair.

Alicia raves, “I am super proud of you and I feel like you weren’t thinking about anything else except for how you were going to shine and not hold back, and that moved me.” Adam points out that he is an amazing coach, and he has won 3 seasons of The Voice now. After hemming and hawing, Jason announces that he chooses Alicia. And, just like that, Alicia has the first official member of her team.

Up next is 33 year old medical supply sales rep David Moisan, he’s a bit older than the typical contestant, but he didn’t start getting in to singing until he was in college. Apparently, he met Adam Levine backstage at concert, and it inspired him to take on singing.

Dave performs “Sex and Candy” for the Voice coaches. Adam Levine is the first to hit his buzzer, followed by Miley Cyrus, Alicia Keys, and Blake Shelton. Miley gives Dave a standing ovation, and rushes on stage to hug him. Adam praises Dave’s falsetto, and says that he “wants him and needs him on his team.” Miley jokes that Dave is a “younger and hotter version of Adam.” Dave reveals that he actually met Adam Levine years ago and it inspired him to start singing.

Miley points out that there is “already one Adam Levine in this world.” Alicia reminds Dave that she “has a knack for bringing a soulful experience to the real world.” It’s time for Dave to pick his coach, and he has four options, after careful consideration he chooses Alicia Keys.

17 year old Courtnie Ramirez is up next, she’s from a small town in Texas, and there aren’t a lot of opportunities there. If she gets a chair to turn, it will change her life. Courtnie hits the stage and sings “Momma Knows Best.” Miley Cyrus and Alicia Keys both hit their buzzers.

Miley wants Courtnie on her team, she praises her vocal range and her “swaggy walk.” Miley wants younger singers on her team, and she thinks that she and Courtnie can play with her a lot of different genres. After Alicia pleads her case, Courtnie chooses to be on Miley Cyrus’s team.

Sundance Head, a country music singer from Texas takes the Voice stage next and performs a powerful rendition of “I’ve Been Loving You Too Long” by Otis Redding. Blake Shelton and Adam Levine both hit their buzzers and want Sundance on their teams.

Blake praises Sundance, “there was a little bit of Southern Rock in there, and that’s what I love about you.” Sundance says he was a little nervous, and he will be better next time. Sundance reveals that he has brought his two children along with them and brings them out on the stage. Both of his little ones want their Dad to pick Blake Shelton, and Sundance agrees, and announces that he wants to be on Blake’s team.

16 year old Georgia native Maggie Renfroe is up next. Back home she spends her spare time singing at charity events an at a local children’s hospital. Maggie sings “Lost Boy” on The Voice stage. None of the coaches hit their buzzers and turn around for Maggie, it looks like she is on her way home. Miley explains that she “could tell that Maggie was young before she turned around.” But being young isn’t a bad things, Maggie just needs some more experience. Blake Shelton agrees, and says that in a few years, he could see Maggie coming back and winning.

28 year old Ali Caldwell is up next. She has been singing for years, she joined a girl group named “Exhale” when she was young, they opened for Boyz II Men and Patty Labelle, and eventually the group faded. She has been on tour in Moscow Russia with a jazz band for the past 5 years, and is ready to return to the United States.

Ali sings “Dangerous Woman” for The Voice coaches, it’s not long before Adam Levine hits his buzzer, followed by Blake Shelton, Miley Cyrus, and Alicia Keys. Ali gets a standing ovation from The Voice coaches. Blake really is gunning for Ali on his team, he points out that “sometimes the rock and soul combination creates magic.”

Miley raves, “Sometimes when you are the best, that’s all anyone knows about you. I would like to find some songs that no one would ever expect for you, so nobody puts you in to a box.” Alicia decides to one-up the coaches and heads up on stage to hug Ali and tell her how special she is. Adam follows Alicia up on stage to give Ali a hug too. Ali’s family joins them on stage, and the coaches continue to try and win her over. Ali shocks everyone by announcing that she chooses Miley Cyrus as her coach.

16 year old Riley Elmore is up next, he is a huge jazz fan and emulates Frank Sinatra. He has only been singing for two years, and he has never had an official gig, but he is eager to start his singing career. Riley performs “The Way You Look Tonight” for the coaches. Within a few seconds, Blake and Adam both hit their buzzers. Blake things that he and Riley are the perfect fit, he jokes that if he could die and come back as someone else, he wants to be reincarnated as Dean Martin.

Adam jumps on stage and decides to give Riley a sneak peek of his coaching. He shows riley how to loosen up while performing, and they sing Frank Sinatra as a duo. The crowd goes insane. Of course, no one is surprised when Riley announces that he chooses Adam, and Adam finally has someone on his team.

Dana Harper is up next, she performs the popular Nick Jonas song “Jealous” for the coaches. Adam Levine, Blake Shelton, and Miley all turn for Dana. Alicia praises Dana’s voice, and says that she has “magnificent control and she feels her tone.” Adam raves that Dana has everything in her arsenal, Blake is a huge fan of Dana’s lower range in her voice and thinks that she should use that to her advantage. In a shocking twist, Dana announces that she chooses Blake Shelton as her coach.

Gabe Bourssard si just 15 years old and hails from LaFayette, Louisiana. He has a band back home called “Strange Theories.” Gabe reveals to Carson Daly that he is also suffering from a rare eye disease, and could lose his eyesight completely. He heads up on stage and sings “Lonely Night In Georgia” for the coaches, and Blake Shelton and Miley Cyrus both hit their buzzers for Gabe. The coaches are all blown away by Gabe when they learn that he is just 15 years old, Miley and Blake plead their cases. After some careful consideration, Gabe picks Blake Shelton, and joins his team.

34 year old Chris Cron is up next, he is no rookie to performing on stage. Cron was in a popular band that performed on Warped Tour, and they got a record deal and had number one songs in Japan and went on tour over seas for years. Chris hits the stage and sings for the coaches, but not a single one of them turns their chairs, Adam Levine encourages Chris to come back and try again next year.

The final singer to perform tonight is Christian Cuevos. His father was actually a pretty big singer in Puerto Rico, sadly Christian’s dad passed away from liver cancer. Christian heads up on The Voice stage and sings “How Can I Live Without You.” Blake, Adam, and Alicia all hit their buzzers – everyone is obviously moved by Christian’s powerful performance. Blake praises Christian and says that he is “absolutely hypnotized.”

Blake says that whether Christian chooses him or not, he is already a fan. Alicia is moved by the emotion in Christians voice, she says that singers “either got it or don’t got it, and he definitely has got it.” Christian has to decide who he wants to be his coach, after hemming and hawing, he announces that he chooses Alicia Keys as his coach and will be joining her team.