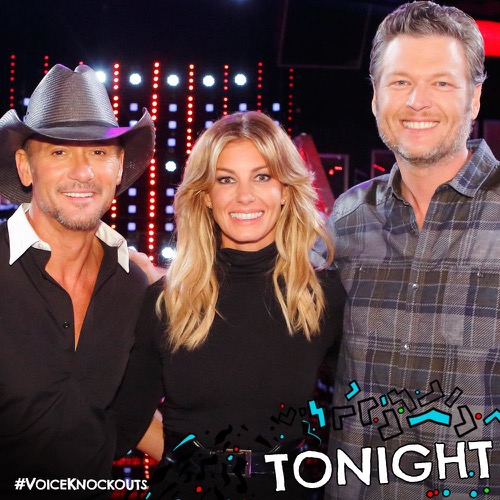 Tonight on NBC’s Emmy Award-winning musical competition The Voice airs with an all new Tuesday, October 24, 2016, season 11 episode 11 and we have The Voice recap right below.  On tonight’s The Voice episode, the knockout round kicks off with the artists selecting their own song to perform. Tim McGraw and Faith Hill serve as key advisers.

Did you watch last night’s episode where The Battle Round came to an end and the artists who make it through will proceed to the knockout rounds? If you missed the episode and what to find out what happened we have a full and detailed The Voice recap, right here for you!

On tonight’s season 11 episode 8 of The Voice as per the NBC synopsis, “For the first time in “Voice” history, the coaches enlist not one, but two Grammy Award-winning artists and country music sensations Tim McGraw and Faith Hill to serve as a key advisers and be on hand to work with all of the coaches and their teams as they prepare the artists for the Knockout Rounds. The Knockout Rounds begin with coaches Miley Cyrus, Alicia Keys, Adam Levine and Blake Shelton’s strongest team members remaining from the battle rounds.”

#VoiceKnockouts start with the judges chatting and Alicia and Miley are nervous. Miley says she has an eye on someone on Adam’s team and Blake says he’s going to steal someone from the women. Faith Hill and Tim McGraw are there to serve as mentors and Blake jokes about how much that costs.

This #TeamBlake pair are the first of the night. Faith and Tim greet Sundance who flirts with Faith and says he’s singing The Climb by Miley Cyrus. Josh meets with them next and he’s doing the country classic My Maria. They both get notes from the mentors and Blake and then it’s time to sing.

Josh goes first followed by Sundance. It seems a clear cut case for Sundance who slayed Miley’s song and brought Adam and Blake to their feet. Alicia tells Josh it’s fluid and says she loves Sundance on the guitar. Miley says Josh is effortless and thanks Sundance for singing his song and liked how he changed it.

Adam says no one with that big of a beard ever covered a Miley song. Adam says he’s a fan of Josh and says Sundance came out guns blazing and Josh could go all the way. Blake has kind words for both of them and then decides to take Sundance to the Live Playoffs.

Adam slaps his button to steal Josh. Blake goes to hug Josh. Adam is thrilled. He tells Josh that no one has wanted to take a country singer to the end and beat Blake more than Adam. Josh Gallagher is now #TeamAdam and he’s surprised that Blake gave him up.

#TeamAlicia has paired the sister duo vs Kylie. Kylie has chosen Hound Dog the Big Mama Thornton version. They fine tune her then meet with the duo. Whitney & Shannon have chosen I Won’t Give Up by Jason Mraz. They get notes on singing individually which is more of a challenge than harmony.

Kylie is up first followed by the sister duo. Kylie rocked the house and the sisters had flawless harmony. Miley says there is no one like Kylie on the show and says she loves the sisters’ voices. Adam says they all wanted the sisters and Kylie is up against two singers but Kylie is a real surprise. He picks Kylie.

Blake says Whitney & Shannon are different as a duo and says Kylie was angry and aggressive and it was great. He says Alicia can’t go wrong. Alicia says there is so much more in Kylie and calls the sisters brown goddesses. She chooses to take Kylie to the Live Playoffs. Blake says it was a tough call but Kylie is a rocker chick.

These ladies are up for #TeamMiley. Ali meets with them first and she’s doing Sade’s No Ordinary Love. She gave them chills. Lauren is up next and she’s doing Rise Up by Andra Day. She’s the one Miley stole from Alicia. They get their notes, a last rehearsal, then take the stage to sing.

Lauren is up first followed by Ali. Ali almost knocked the roof down by Lauren also did a nice job. Adam says he loves Ali and says she’s ridiculous and says she could win this. Adam says Lauren’s performance was more emotional but he thinks Ali won. Blake says Ali will go far in the competition.

Blake adds Lauren has urgency and desperation in her performance. Alicia says she likes Ali’s strategy to take the song great places and says Lauren had a beautiful breakthrough. She tells Miley damn. Miley says Ali could win it and Lauren is amazing, gorgeous, and you don’t see her pain but they need to. Miley chooses Ali to take to the Live Playoffs.

This is a #TeamAdam Knockout. Dave has chosen Like I Can by Sam Smith. Simone has chosen Midnight Train to Georgia. Tim and Faith give them performances notes. Adam worries that Sam Smith is a big challenge. They do their final band rehearsal and stage rehearsals then it’s Knockout time.

Dave was good but Simone slayed it. Blake says Dave was a four chair turn and he’s a fan. He says Simone seized the opportunity and he’d give her the win. Alicia says Simone’s performance was beautiful and says Save has a beautiful voice that’s its own world but this wasn’t the best song choice.

Miley says she liked Dave showed all his tricks but Simone is such a fighter and it shines through. Adam says they both made a lot of progress but has higher praise for Simone. Adam decides to take Simone to the Live Playoffs.

Courtnie Ramirez vs We McDonald

This is another #TeamAlicia Knockout. Courtnie was Alicia’s steal from Miley. Tonight she’s singing If I Were a Boy by Beyonce. We is next and she’s chosen No More Drama by Mary J Blige. They each talk about what the songs mean to them. Tim’s jaw drops when he hears We.

They get notes and are ready for their Knockout. Courtnie goes first then We and We brings down the house. Miley tells Courtnie she outdoes herself every time. Adam says they are both amazing and killed it. Blake says We’s talent is ridiculous and he wants some of it. He says Courtnie has charisma.

He says neither should go home. Alicia says wow and says they are both 17. She insists they get a standing ovation. Alicia chooses We for the Live Playoffs. Adam and Faith goof around on stage.

This is a #TeamAdam pair and Riley is doing Have I Met You Yet by Michael Buble. The teen crooner gets some notes from Tim and Faith. Jason has chosen I Want You by Luke James. Jason is Adam’s steal. They get their performance notes, prep and it’s time for the Knockouts.

Adam says Jason is an incredible singer and a good human. He says Riley takes him to another time. Adam chooses Riley to take to the Live Playoffs. Blake slaps his button to steal Jason. Adam says Blake is scared Alicia or Miley will press their buttons. Jason moves to #TeamBlake.