The Young and the Restless (Y&R) Spoilers: Adam Kidnapped – Victor Forced to Free Marco to Save Son? 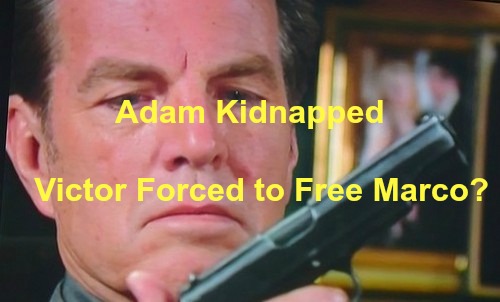 “The Young and The Restless” (Y&R) spoilers tease that Adam Newman (Justin Hartley) may soon find himself in a trap that forces Victor Newman (Eric Braeden) to release an enemy of both the Newman and Abbott clan.

Y&R spoilers indicate that Adam will be targeted by forces unknown – this becomes important when Victor sends Adam on an international “business” trip. Victor has already given Adam the info on Marco Annicelli’s (Peter Bergman) whereabouts.

The idea is for Adam to release this info to Luca Santori (Miles Gaston Villanueva) as the rope to let him hang himself. But could the noose tighten around Adam’s neck instead? Victor will send Adam off to Spain and this is where things go awry.

Was Victor sending him on a Santori related errand? No doubt. Since the Santoris have interests in Spain – it makes sense for Victor to send him there to do some investigating (or meddling). But it looks like Adam won’t make it to wherever Victor wants him to go.

Later in the week, Chelsea Newman (Melissa Claire Egan) will confront Victor when she hasn’t heard from Adam in a while. She’s in a panic. Will this be Victor’s first sign that something has gone awry with Adam? Or will he already know his son is in trouble?

We’ve heard the name Marco Annicelli in great prominence recently – is this an alert that the one-eared villain could be back soon? Y&R spoilers hint that Adam may be taken by Marco’s associates and used as leverage to force Victor to release Marco. The fact that Luca said that he heard Marco is dead (Wednesday, Jan 13 show) means nothing, this is merely a red herring to increase fans’ surprise when Adam’s kidnapping plays out.

If this is in play, despite the danger Marco presents, Victor would have little choice but to release him to guarantee Adam’s safety. With all of Genoa City preparing for Billy Abbot’s (Jason Thompson) impending death – so far as they know – Victor is too aware of how fast life can change.

Victor is watching Jack Abbott struggle with his brother’s mortality – he doesn’t want to face a similar situation himself by losing Adam. Victor may talk a tough game at first and try other strategies – but ultimately Victor will do what he must to get Adam freed from his captors.

What do you think Y&R fans? Do you think Adam’s kidnapping is related to Marco? Will the vile drug lord soon be back in Genoa City? Share your thoughts in the comments below and come back to CDL often for more “The Young and The Restless” spoilers and news.