‘The Young and The Restless’ Spoilers: CBS Casting News – Neil’s Parents Coming to Genoa City to Save Son? 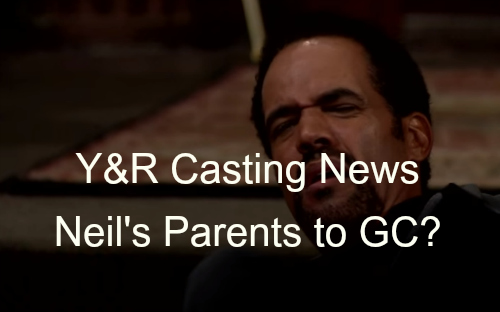 The Young and The Restless (Y&R) spoilers tease that Neil Winters (Kristoff St John) may soon have more assistance in his sobriety struggle – are his parents coming to Genoa City to help out their troubled son?

CBS is casting for two new roles for Y&R – an African-American male and female in their late 60s/early 70s and both are trying to “make peace” and “right the wrongs” of their past. Could these two be Neil’s parents coming to town?

The two new cast members are named Ellis and Lucinda and if you know your Y&R family trees, you know that Neil’s full name is “Neil Ellis Winters.” Is the new couple being cast Neil’s parents that we never met before?

Remember when there was the big press conference to announce the Abbott-Winters Foundation rehab/sobriety facility? Neil went to the podium and announced that he would be the first patient to be treated there because he fell off the wagon.

The Young and The Restless spoilers hint that there is more storyline to come from that announcement and the drama swirling around Neil right now. Jack Abbott (Peter Bergman) is all up in the air about Neil “kidnapping” Hilary Curtis (Mishael Morgan).

In fact, Neil kept her alive. Jack will have the choice to turn in Neil or not. Likely he won’t but on the condition that Neil follows through and checks into the facility for treatment. Since Hilary doesn’t want to press charges, Jack should drop it.

Assuming Ellis and Lucinda are Neil’s parents, they could come to GC to help Neil work through his issues. Since both will address sins of the past when they come to town, perhaps we’ll get some insight into why Neil is a booze-hound.

Were his parents alcoholics? Were they neglectful or abusive? We don’t know a lot about Neil’s childhood other than he has a half-brother Malcom Winters from a different mother, but the two apparently grew up together in Chicago.

Neil and Malcolm were different – Neil was a gifted student and Malcolm was a jock. Neil shunned Malcolm for being a wild child but then apparently Neil went on to be more of a wild child himself given his battle with the bottle.

Other than this scant information, Neil’s background is open to interpretation so they could dig into events from Neil’s past to explain his addiction. Could it be that Neil’s parents arrive and help him achieve true sobriety?

If Ellis and Lucinda address the wrongs of their past, Neil can be at peace and conquer his demons. The Young and The Restless spoilers indicated Neil would have a diminished storyline and Kristoff St John would be seen less.

But with this casting news, it looks like things may be turning around for St John and he could be featured in a prominent new plotline. What do you think Y&R fans? Do you think the casting call is for Neil’s parents? Are you excited to meet them?

Share your comments below and check back with CDL often for more The Young and The Restless spoilers.