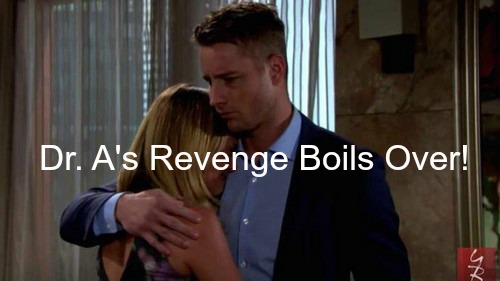 “The Young and The Restless” (Y&R) spoilers indicate that Dr Sandy Anderson (Elizabeth Bogush) is furious that her revenge scheme against Nick Newman (Joshua Morrow) is falling apart. Despite her meddling, Nick and Sage Newman (Kelly Sullivan) are happily together right now.

Dr Anderson won’t stand for that and Y&R spoilers indicate that she’ll go after Sage to try and ruin Nick’s life. Dr A has come at Nick a couple of different times to warn him to give Sage space in order to drive a wedge between them. Only Nick ignored her warnings and got closer to Sage instead.

Dr A knows that Sage is emotionally vulnerable since she just lost her child and she may encourage her to turn to Adam Newman (Justin Hartley) since Dr A knows they have strong ties. Plus with Sage living right across from Adam, it’s convenient for her to turn to him.

What Dr Anderson doesn’t know – that would help advance her schemes faster – is that Adam is Christian’s father. Y&R spoilers indicate that Sharon Newman (Sharon Case) will soon have some medical tests done on Sully that will let her know she shares no DNA with the baby.

Of course, Dr A already knows that too, but if something crops up in those tests that hints to the evil doctor that Nick may not be Christian’s father, she would be thrilled to find that out. That means she could orchestrate it so that Nick loses the baby twice – one to a fake death and one to another father, his hared brother Adam!

Nick seems to be ignoring any advice that Dr Anderson offers so she’ll have no choice but to go after Sage to wreck their reunion. If Dr Anderson can get Sage to open up to her and admit that she told Adam and Chelsea Newman (Melissa Clair Egan) that she loves him, that would help her immensely.

If the bad doc ferrets out that admission, she can use it to encourage Sage to explore her feelings with Adam and also to mess with Nick by telling him that Sage loves his brother. Nick will absolutely hate that and it could work to estrange them and throw their marriage back off track.

No matter what, Dr Anderson will not give up on her plan to revenge herself on Nick and ruin his life in return for what he did to her as a teen. Y&R spoilers indicate that Dr Anderson’s true identity will be exposed soon and Nick will realize she’s the girl who broke her neck at the Newman Ranch.

Once Nick knows Dr A is the girl injured at his party as a teen, will he immediately realize she’s back in town to punish him? Even if he suspects, he wouldn’t think to blame her for his son Christian’s supposed death so it will be a while before Nick knows the extent of the impact Dr A has had on his life.

What do you think Y&R fans, will Sage fall for Dr Anderson’s pressure tactics and get closer to Adam while pushing herself further from Nick? Share your thoughts in the comments below and check back with CDL often for more “The Young and The Restless” spoilers, news and more.