The Young and the Restless Spoilers: Justin Hartley and Michael Muhney Both Seen On Y&R Again – Christian is Gabriel’s Child 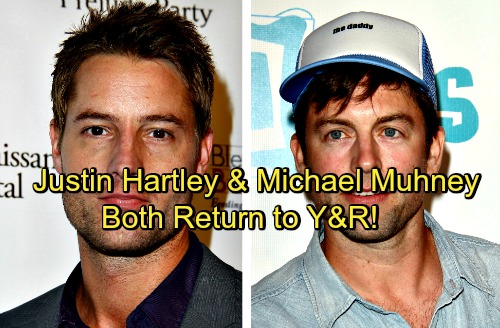 The Young and the Restless spoilers tease one of the most shocking soap opera reveals in recent history will take place. Christian Newman (Jamie and Alister Tobias) is Gabriel Bingham’s (Justin Hartley) child! But wait, how could that be when Sage (Kelly Sullivan) had a sexual encounter with Adam (also most recently played by Hartley) that supposedly resulted in Christian being conceived? Well, daytime drama isn’t meant to be bland, which means that it’s time to explore this incredible fictional reality.

Okay soap scribe we (the viewers) know that Hartley has a full-time gig with NBC and that his show, This Is Us, has become a major hit. New head writer Sally Sussman also said that Hartley’s successful and isn’t returning to Y&R. That means he won’t be playing Gabriel, or Adam again. True, but Sussman didn’t mention the plausibility of Hartley having filmed additional scenes before he departed that will eventually be played in flashback sequences. Therefore, he doesn’t have to rehired to be seen in fresh scenes.

Imagine a reveal so deep, so creative, so amazing that even a dead character (Sage) will be stunned somewhere in another world. And no, that’s not a reference to NBC’s long-running soap of the same name. It’s just another part of this digital story. Just as Marco (Peter Bergman) fooled Phyllis (Gina Tognoni), so too could Gabriel have doppelganged Sage. Oh my!

Sussman’s options where Adam Newman is concerned aren’t limited to recasting this character. Fans were led to believe that Michael Muhney and Hartley both filled that role, but Hartley’s face was also identical to Gabriel Bingham’s. That fact now becomes key.

Well, even if it’s true that Hartley could be shown as Bingham in retrospect, some people still doggedly believe that Muhney can’t return to Y&R because he was fired for having acted inappropriately toward Hunter King (Summer). Maybe that rumor was actually true? No, it wasn’t. That rumor was debunked by common sense long ago.

Muhney would have been immediately fired if he’d actually groped King. He wouldn’t have been allowed to play through the last weeks of his contract, as was the case. Y&R is an actual place of business, which is governed by laws. Sometimes it’s easy to forget that it’s not just a fictional world.

Beyond the point noted above, Muhney publicly stated on his Twitter account in mid-2014 that he was meeting with Y&R to return to show. Again, it’s not logical to think that he would have been discussing a return to the show only months after having been fired for sexual harassment in the workplace. That fact also proves that the rumors about him were wrong. Muhney was eligible for rehire in 2014 and remains eligible for rehire as 2017 approaches.

But there is one lingering question that doesn’t seem to make sense. Hartley’s version of Adam wouldn’t have told Chelsea (Melissa Claire Egan) that he was Christian’s father, as Sage’s letter confirmed. Unless, of course, Hartley was never playing Adam. No, he was always playing Gabriel, even though Sage didn’t know it.

Yes, Gabriel suffered terrible burns on that fateful night while trying to rescue Adam and need restorative surgery. But he never told Sage about his plan to become Adam and exact revenge on his deceased father’s behalf. Victor (Eric Braeden) was Gabriel’s target all along, as will be further explained in the future storyline.

Like Billy (played by David Tom after the accident), Muhney’s Adam crawled away from the fiery SUV that crashed in January 2014. His face wasn’t burned, so he never required facial surgery. Adam has been living in the woods on the outskirts of Genoa City ever since, suffering from soapy amnesia that will eventually lift and allow his return.

Paternity test results are never conclusive evidence. Instead, they’re fluid facts that can be changed. So whoever is medically tagged as Christian’s father will purely be playing the role of temporary bio-dad. Yes, Gabriel (Hartley) held those paternity rights, not Dylan (Steve Burton), Nick (Joshua Morrow) or even Adam (Muhney). But why mention Gabe in the past tense?

Gabriel did die in that cabin explosion, which keeps Hartley’s prime time stardom in tact. Adam’s DNA was found at the scene, but that’s because he was attempting to rescue the man who everyone believed was him. Thus, this arc has been explained and Muhney’s teased return can happen.

Sussman said that she didn’t want to do a paternity reveal with a character who’s off-camera. That describes Hartley’s actual Y&R alter ego in the end.