The Young and the Restless Spoilers (Y&R): Who Killed Dr Anderson – List of Suspects Revealed (POLL) 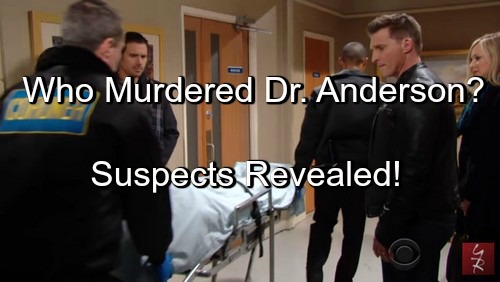 “The Young and The Restless” (Y&R) spoilers indicate that the mystery of who killed Dr Sandy Anderson (Elizabeth Bogush) kicks off this week of Feb. 8 and the list of possible culprits is intriguing. Dylan McAvoy (Steve Burton) and Paul Williams (Doug Davidson) will lead the investigation and here’s a look at some of the suspects – check it out then vote in our POLL for who you think killed Dr A.

Crazy Patty Williams (Stacy Haiduk)
Most people seem to think crazy Patty is the knife wielding killer, but she’s the obvious choice, so it may not be her unless Y&R writers are very lazy and lack any creativity. Let’s hope that’s not the case, though, and that poor Patty is not the culprit. She deserves a break.

Sage Newman (Kelly Sullivan)
If ever there was a case of justifiable homicide, Sage killing Dr A is it. If Sage figured out on her own or from Patty’s clues that Sandy stole her baby Christian, convinced her the child died, and gave it to her hubby’s ex-wife, she may well have stabbed the b*tchy shrink for tormenting her.

Ian Ward (Ray Wise)
Sure this seems out of the blue – except that Patty was just raving about how much she likes Ian and what a great guy he is. If Ian found out sweet loony Patty was back under Anderson’s control and in danger, he would have no qualms about killing Dr A – he is a madman after all.

Adam Newman (Justin Hartley)
For all the reasons that Sage could kill Dr Anderson, Adam could also kill Dr Anderson. Christian is his child too and Adam can be a dangerous fellow. He’s a long shot, though, since he had his hands full dealing with the botched Luca Santori (Miles Gaston Villanueva) deal.

Evil Minions
Dr Anderson has an orderly who does her evil bidding as well as a nurse that helped steal Sage’s baby. If either of them thought the plan was about to come out and they were facing jail time for assisting Dr Anderson in her evil plan they may have offed her to avoid Dr A blaming them.

Dr A Co-Conspirator
Dr Anderson may have a co-conspirator – aside from her evil minions – that helped her cook up this scheme to get revenge against Nick Newman (Joshua Morrow). We don’t know who this could be, but it’s a distinct possibility that her killer is someone we don’t know yet.

Assassin Hired by Victor
If Victor Newman (Eric Braeden) found out that Dr Anderson was gunning for Nick, he might have hired someone to take her out. And since Dr A knows the secret of Christian’s paternity which Victor is using against Adam, he may have had her killed so he can keep leveraging Adam.

What we do know is that Nick and Sharon Newman (Sharon Case) are in the clear since they were together when Dr A was killed and then found the body. But lots of other people in Genoa City don’t have an alibi…

What do you think? Who killed Dr Anderson? Vote in the POLL below and share your comments below – and come back to CDL often for more “The Young and The Restless” spoilers and news.