The Young and the Restless (Y&R) Spoilers: New Romance for Summer and Luca – Victor Betrayed by Summer with Santori Lover?

BY Stormy Elizabeth on February 9, 2016 | Comments: one comment
Related : Soap Opera, Spoiler, Television, The Young and the Restless 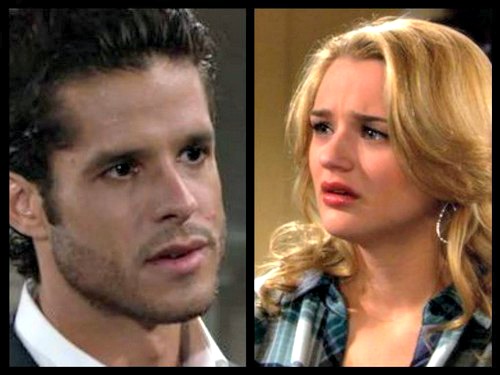 “The Young and The Restless” (Y&R) spoilers tease that we may see a new romance blossom at Newman Enterprises and it will not go over well with Victor Newman (Eric Braeden). Are Summer Newman (Hunter King) and Luca Santori (Miles Gaston Villanueva) destined for love?

That will put an end to Luca and Marisa’s marriage and means Luca will be looking for love. Luca has already flirted up Summer at Crimson Lights and when Noah warned Luca to stay away from Summer, that’s like chumming the water and telling a shark to stay back…

We know that Summer has devastatingly poor judgment when it comes to men – there’s Austin Travers (Matthew Atkinson), falling for Ian Ward’s (Ray Wise) line of bull, and so many other missteps where she’s chosen some random guy over family loyalty.

Soon, Victor will bring Summer into the fold at Newman Enterprises which puts her right where Luca can get to her and she’s ripe for the plucking. All Luca will have to do is show Summer the slightest bit of attention and he’ll have her like a dog on a leash.

And when Luca finds out his wife took off with Noah out of town, of course he’s going to use Summer to get revenge against her brother. However, what starts as Luca using Summer to get to Noah and Victor could blossom into something real between the two.

It seems like Y&R is using the worldly and older characters of Luca and Marisa to try and make the characters of Summer and Noah seem more mature. Noah looks like he’s a 16 year old kid playing dress up in those suits and Summer looks like she should be at cheerleading tryouts.

But by hooking those two up with the lusty Spaniards that puts them into grown-up relationships to try and get the fans to view them differently. Y&R spoilers indicate that there are major scenes coming between Summer and Victor and these may revolve around Luca.

Joshua Morrow tweeted that Eric Braeden did some scenes that were “insane” and that we’ll see in a couple of weeks. That tweet was from January 29, so it looks like those are coming soon.

Then Hunter King tweeted and revealed she was part of those scenes saying of Braeden, “Working with you is always a blast.”

Can we expect a confrontation between Victor and granddaughter Summer over her latest romantic escapade? If Victor orders her away from Luca that will just entice her more. Summer could fall in love with an ice cube before it melted in a hot pan, so she could get serious about Luca fast!

Victor won’t like it that Luca is bedding his granddaughter if this plot comes to fruition and you can bet Luca is horrid enough to share the unsavory details with The Mustache. This would bring some nice friction into the Santori storyline, so let’s hope this happens soon.

What do you think Y&R fans? Do you want to see Summer and Luca spark a new romance and drive Victor over the edge? Share your comments below and check back with CDL often for more “The Young and The Restless” spoilers.