The Young and the Restless (Y&R) Spoilers: Adam Gets Nick To Exhume Constance’s Body Again – Sharon Freaks Over Sully’s Genetics

BY Heather Hughes on May 28, 2016 | Comments: 2 comments
Related : Soap Opera, Spoiler, Television, The Young and the Restless 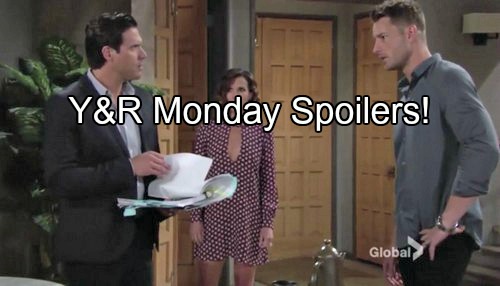 “The Young and the Restless” (Y&R) spoilers for next week’s episode on Monday, May 30, tease that Michael (Christian LeBlanc) will stop by the penthouse to speak with Adam (Justin Hartley). It seems there’s no evidence that Sage’s (Kelly Sullivan) journal was forged. Chelsea (Melissa Claire Egan) will look through a copy of the entry that points to Adam’s guilt. She’ll insist that all of this is ridiculous.

Michael will think there’s one more option. Y&R spoilers know that they could have Constance’s (Sally Kellerman) body exhumed again. The results may have been tampered with the first time. They can repeat the process, but they’ll need Nick’s (Joshua Morrow) permission.

At Newman Enterprises, Luca (Miles Gaston Villanueva) will fib to Summer (Hunter King) and Noah (Robert Adamson). He’ll claim that he spoke with Victoria (Amelia Heinle) and she wants Summer to speak with the press. Luca will coach Summer on what to say and she’ll give the interview.

Meanwhile, The Young and the Restless spoilers say Victoria will take Johnny to Billy’s (Jason Thompson) place. They’ll trade insults and allude to each other’s new love interests. Victoria will suggest that she’s too focused on Newman to do anything else. Billy won’t be sure about that based on the latest report. He’ll show Victoria the news of the oil spill. She’ll rush back to her office for details.

Once Victoria arrives, she’ll ask what’s going on. Luca will lie that they handled everything according to her wishes. Victoria will pause for a moment and decide to go with it. She’ll express gratitude for Summer’s help.

After everyone else files out, Victoria will confront Luca and wonder what he thinks he’s doing. Luca will suggest that he helped Victoria by covering for her. Now no one has to know she couldn’t be reached during an emergency. Luca will contend that he intends to prove himself and become a valuable asset at Newman.

At Billy’s place, he’ll call Natalie (Mara McCaffray) and she’ll come over. They’ll discuss the Newman situation and watch Summer’s interview. Billy will realize there’s a cover-up in play. He’ll assume that Summer is in on it.

When Noah shows up, he’ll shrug that it was Victoria’s idea. Billy will explain that Victoria was with him when she heard about the spill. Noah will gripe about Luca and head off to tell Summer how slimy her boyfriend is.

Other “Young and the Restless” spoilers say Michael and Kevin (Greg Rikaart) will chat about love. Kevin will give Michael updates on his dilemma and that hot kiss with Mariah (Camryn Grimes). Michael will think Kevin needs to make a choice before things snowball.

Later, Kevin will tell Natalie that he wants to be a couple. She’ll be thrilled and they’ll start making out. Y&R buzz hints that Kevin’s future may actually lie with Mariah, so perhaps Natalie shouldn’t get quite so excited.

At Sharon’s (Sharon Case) place, Faith (Alyvia Alyn Lind) will comment on Sully’s cowlick. When Nick points out that those can be genetic, Sharon will fear that Nick secretly knows the truth. She’ll take Mariah aside for a panicked conversation. Mariah will urge Sharon to chill. She won’t think Nick knows and she’ll promise to stay tight-lipped.

Nick will nearly overhear, but Faith will end up distracting him. Nick will admit that seeing Sully makes his loss easier to deal with. After Nick leaves, Mariah will blast Sharon for her continued deception. Nick is obviously in a lot of pain. As Faith eavesdrops nearby, Sharon will yell that she won’t lose her baby.

Back at the penthouse, Adam will beg Nick to help him out. Nick won’t like the fact that Adam has been digging through a copy of Sage’s journal. He’ll be fed up with Sage’s memory being tarnished by the drama. Adam will argue that they can put this issue to rest if Nick will agree to let them exhume Constance’s body.

Stick with the CBS soap to see what Nick decides.