‘The Young and the Restless’ Spoilers: Adam’s Total Meltdown Over New Murder Evidence – Victor Given Shoot To Kill Warning 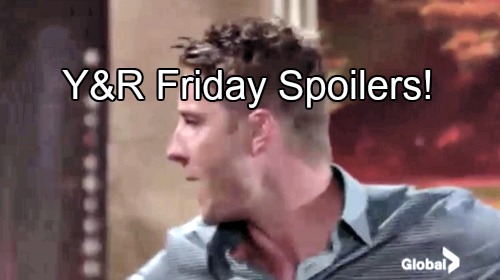 The Young and the Restless (Y&R) spoilers tease that Adam (Justin Hartley) will be stunned when Dylan (Steve Burton) shows up at the penthouse with more evidence on Friday’s episode, June 24. Things are just keep getting worse for Adam. He knows Victor (Eric Braeden) has someone helping him on the outside, but he has no clue who it might be.

Unfortunately, Adam’s trial is rapidly approaching. He may not have a chance to uncover this mystery before he heads to court. As if this situation wasn’t bad enough, Dylan’s latest piece of proof will make Adam look even guiltier.

This startling development will leave Adam on the brink of a total meltdown. He’ll explode as he realizes there’s no limit to what Victor can accomplish.

The Young and the Restless spoilers say Adam will begin tearing apart a stuffed animal as he deals with his rage. He’ll sarcastically suggest that they need to make sure Victor didn’t put poison in there. It’s clear that Adam has had it with this mess. He’ll declare that the whole thing is stupid.

Chelsea (Melissa Claire Egan) will seem concerned and distraught as she watches her husband’s teddy bear rampage. She’ll see that Adam is at the end of his rope. If Adam can’t get his emotions in under control, it could make it even tougher for Michael (Christian LeBlanc) to win his case.

Any type of outburst could cost Adam his freedom.

Speaking of freedom, it appears the warden will suspect Victor might be plotting an escape. He’ll warn against whatever Victor might have planned. The guards will shoot to kill if Victor tries to pull any stunts.

Of course, Y&R viewers know that Ian (Ray Wise) is the one with the getaway up his sleeve. Victor might be aware of that as well. He has eyes and ears everywhere. If Victor is indeed in the loop, that could spell trouble for Adam.

Next week, The Young and the Restless spoilers reveal that Victor will take the stand to deliver bombshell news.

Could Victor tip everyone off to Adam and Ian’s scheme? Victor may not have proof, but his word could be enough to create doubts about Ian’s credibility. Then again, Victor may make another announcement entirely. Whatever it is, jaws will certainly drop inside that court room.

Meredith will also be in attendance on Adam’s judgment day. How will Meredith react to this Newman circus? It’s tough to say, but she’s definitely head over heels for Victor right now. Meredith may be more convinced than ever that her lover is the victim of his family’s hatred.

Victor has Meredith wrapped around his little finger and he won’t let go until he gets what he wants.

It sounds like some explosive episodes are coming up. The Young and the Restless fans will want to stay tuned for all of the courtroom chaos. We’ll give you updates if we learn any more details on the big event.