‘The Young and the Restless’ Spoilers: Chloe Laughs At Chelsea’s Heartbreak – Adam Tells Michael To Lie To Chelsea 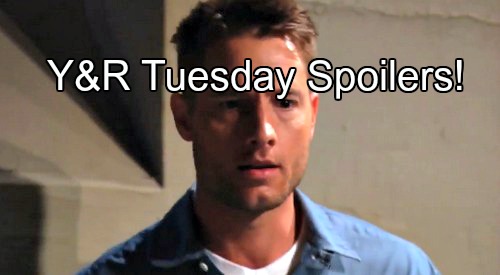 The Young and the Restless (Y&R) spoilers for Tuesday, July 26, tease that Chelsea (Melissa Claire Egan) will complain about what Victor (Eric Braeden) has done to Adam (Justin Hartley). The fact that Adam won’t agree to see Connor (Gunner and Ryder Gadbois) is really starting to bother Chelsea. She’ll tell Anita (Catherine Bach) that it’s important for Connor to know his dad is innocent.

When Anita hints that the Internet will eventually tell Connor otherwise, Chelsea will flip her lid. She’ll insist that she needs a way to bring Adam home. In prison, Adam will urge Michael (Christian LeBlanc) to find the missing journal entries and get him out of there. Michael will promise Adam that he’s doing his best.

Later, Anita will drop by to convince Adam that Chelsea deserves her freedom. Adam will mull it over and ask Michael to give Chelsea a message. She’s to be told that Adam is in solitary confinement and can no longer have visitors. Adam will indicate that he needs to face reality and let Chelsea go.

At the athletic club, Jack (Peter Bergman) will scold Jill (Jess Walton) for interfering in Billy’s (Jason Thompson) love life. He won’t think Billy needs to be pushed toward Victoria (Amelia Heinle). Jill will insist that Billy loves his ex. She’ll intend on doing whatever she can to help them reunite.

Jill will shift gears and suggest that Phyllis (Gina Tognoni) should straighten up. Jack might find someone new if Phyllis keeps dragging her feet. Jack will be adamant that Phyllis is the only gal for him. Meanwhile, Phyllis will make love with Billy in his bedroom. Once they’re done, Phyllis will give Billy the news that she’s made her choice.

The Young and the Restless spoilers say Phyllis will determine that her future lies with Billy. She’ll agree to tell Jack that it’s over. They can come clean about their own relationship at some point. Billy will be thrilled. He’ll feel like there’s nothing that can stop them from having a wonderful life together.

Unfortunately, their plan will hit a snag thanks to Jill. She’ll walk in the mansion and notice Phyllis’ blouse. Jill will head upstairs and spot Phyllis in bed with Billy! This could certainly throw Billy and Phyllis for a loop. When Phyllis returns to her suite a little later, she’ll find Jill waiting for her. It looks like Jill is ready to give Phyllis a piece of her mind.

Other Y&R spoilers say Victor and Chloe (Elizabeth Hendrickson) will have a confrontation over the missing journal entries. Victor will demand to know where they are, but Chloe will state that she burned them. Once Victor threatens to take Chloe’s daughter away, she’ll fight back with a threat of her own. Chloe will warn that she could expose their partnership to bring Adam down.

Victor will get rid of Chloe just before Nikki (Melody Thomas Scott) comes in. Moments later, Nick (Joshua Morrow) and Victoria will arrive to discuss the situation at Newman Enterprises. They’ll talk about the oil spills and who could be to blame. Luca (Miles Gaston Villanueva) will continue to draw suspicion.

Jack will show up to push Victor toward a truce. He’ll want put an end to the battle between Victor and Phyllis. Victor will argue that a truce can’t happen if one side still wants revenge. He’ll believe Jack should wise up and realize that Phyllis is probably plotting vengeance.

At the penthouse, Chelsea will be stunned by Chloe’s arrival. They’ll spend some time catching up. Chloe will insist that she’s been through all of her therapy and she’s let go of her grudge against Adam. Chelsea will gripe about Victor framing Adam for a crime he didn’t commit.

Chloe will laugh at Adam’s hardship. Needless to say, Chelsea won’t be amused. She’ll point out that Connor’s dad was taken away from him. Chelsea will begin to cry over the difficult circumstances and Chloe will take that as her cue to leave. She’ll offer an apology and head on her way.

In Wednesday’s episode, we’ll see Chloe meet up with Billy at the mansion. She’ll also have a chat with Kevin (Greg Rikaart) later this week. When will someone finally figure out that Chloe is up to something? Stay tuned for updates on this unraveling mystery.