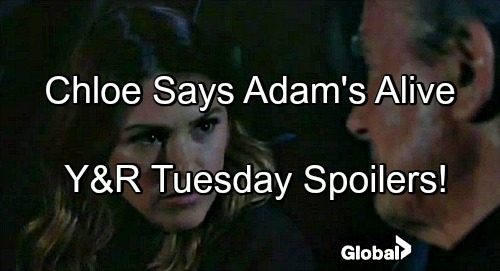 The Young and the Restless (Y&R) spoilers for Tuesday, September 6, tease that Billy (Jason Thompson) and Phyllis (Gina Tognoni) will argue about their relationship. At Brash and Sassy, Billy will insist that he loves Phyllis and wants to be together again. Phyllis won’t see how they can make it work. There are just too many obstacles to overcome.

When Jill (Jess Walton) appears, Billy will step out in the hall with her. Jill will mention a business trip that she wants Billy to attend with Cane (Daniel Goddard) and Victoria (Amelia Heinle). They’ll be leaving for Seattle soon. Billy will head back into his office and complain to his love. He’ll suggest that he’d rather spend time with Phyllis.

Phyllis will think Billy should go, but he won’t be persuaded. Meanwhile, Ashley (Eileen Davidson) also won’t be convinced when Jack (Peter Bergman) claims his marriage is on track. Ash will wonder about the true state of Jack’s marriage. She’ll ask how things are going between Billy and Phyllis as well.

Jack will contend that Billy isn’t leading Phyllis astray anymore. He’ll imply that Phyllis seems to have dropped her scheming. Jack will point out that he let go of his grudge against Victor and he’ll hope that Phyllis can do the same. Later, Ashley and Phyllis will console Jack after he gets confirmation on Adam’s (Justin Hartley) death.

At Victoria’s place, she’ll finish making love with Travis (Michael Roarck). Once Jill pops in, she’ll find Travis with his shirt unbuttoned. Jill will quickly fill Victoria in on the upcoming business trip. After Dylan (Steve Burton) texts Victoria, she’ll head over to the police station and get the news of Adam’s demise.

Jill will stick around for a little chat with Travis. He’ll understand that Jill wants a reunion for Billy and Victoria, but he’ll offer himself as an alternative. Travis will believe that he can give Victoria and her children a happy life.

After Jill storms out, Billy will arrive. He’ll side with Travis and urge him to go on the business trip with Victoria. Billy will indicate that he has other ideas on how to spend his time, so Travis might as well help Victoria mix business and pleasure.

Elsewhere, Jill will continue scheming. She’ll call Cane and insist that he’s not needed on this trip. It looks like Jill is counting on some privacy for Billy and Victoria.

Other Young and the Restless spoilers say Chloe (Elizabeth Hendrickson) will assure Victor (Eric Braeden) that she’s not to blame for Adam’s (Justin Hartley) death and says she thinks he escaped in the explosion. She’ll suggest that maybe Adam set up the explosion so he could get away. Victor will offer a stern warning. If he finds out Chloe is responsible for Adam’s death, she’ll pay the price.

Back at the station, Chelsea (Melissa Claire Egan) will completely fall apart. She’ll try to deny that Adam is dead, but she’ll eventually vow revenge to get revenge. Nick (Joshua Morrow) will manage to convince Chelsea that Victor wouldn’t have gone that far. After Nick rants about her pain, Paul (Doug Davidson) and Dylan will give Chelsea her freedom.

Paul will tell Dylan that they discovered a propane leak at the cabin and believe it caused the explosion. Dylan will be upset to learn that case is now closed, but Paul will argue that there’s no evidence of foul play. At Newman Enterprises, Victoria will show up to comfort Victor as he wrestles with guilt.

At the penthouse, Chloe will arrive to find Nick with a distraught Chelsea. When Chloe hears about Adam’s death, she’ll promise to help Chelsea get through this. Nick will state that there’s no proof of homicide and the investigation is over for now.

Chelsea will head up to Connor’s (Gunner and Ryder Gadbois) room to tell him that his daddy won’t be returning. Chloe and Nick will listen to the heartbreaking moment on the baby monitor. Y&R viewers can expect plenty of drama as Adam’s memorial gets underway. Stay tuned to the CBS soap for updates on the despair of Adam’s loved ones.

TOMORROW ON #YR: Billy lays it on the line with Phyllis! https://t.co/lQohaFwV3i pic.twitter.com/sDxrQhZfc5

Will Chloe’s partnership with Victor be exposed?? #YR pic.twitter.com/LoHJtSVYz9