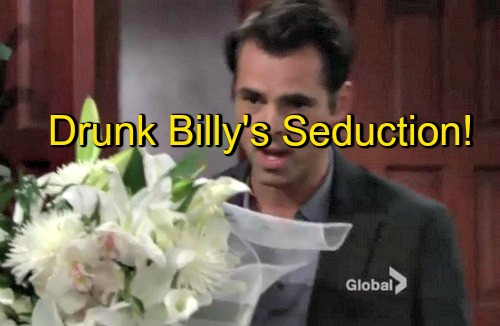 “The Young and the Restless” (Y&R) spoilers reveal that on Monday’s episode, April 4, Victoria (Amelia Heinle) will cool off after her recent outburst. In Friday’s episode, Victoria declared war during Billy’s (Jason Thompson) Passkey press conference.

However, Victoria will eventually decide that she should try to work this out with Billy if she can. There’s no need to turn this into a cutthroat battle unless they absolutely have to.

Jack (Peter Bergman) will urge Billy to reconsider his options, too. They’ll get into a heated argument over the stress this project has caused. Phyllis (Gina Tognoni) will attempt to keep the peace between these brothers, but it won’t do much good.

Jack will contend that Billy needs to reach some kind of understanding with Victoria. It’s what’s best for Billy as well as Jabot.

Later, Billy will head home and settle in for a night of drinking. It seems the conflict with Victoria is taking a toll. “The Young and the Restless” spoilers say Billy will be surprised when Victoria shows up at his door. She’ll extend an olive branch and hope that they can become co-owners of Passkey.

Unfortunately, it looks like the alcohol will affect Billy’s judgment. He’ll try to seduce Victoria and she won’t appreciate it. Victoria will immediately take back her offer and insist that the war is back on. She’ll plan on going to court if necessary. In fact, Victoria may have an excellent legal expert on her side in the near future.

“The Young and the Restless” spoilers indicate that Victoria will approach Michael with a tempting offer. She’ll suggest that he should come on board at Newman Enterprises. Even if Michael is disbarred, his knowledge could be useful. Michael will be taken aback by Victoria’s proposal. He’ll likely be hesitant to accept this position at the company.

Nevertheless, Victoria will persist. She’ll ask if half a million dollars would convince Michael to join the team. That’s a pretty sizable sum, especially for a guy who’s on the verge of losing his livelihood.

Will Michael turn his back on the Abbotts and work for the enemy instead? We’ll have to wait and see, but Victoria obviously has some very “Victor-ish” tricks up her sleeve. Y&R viewers will be anxious to see what else Victoria has in store. Stick with the CBS soap for updates on Michael’s decision.

So Y&R fans, what do you think about the news that Billy will anger Victoria again? Will Victoria fight back in a big way? Will Michael agree to help out at Newman?