The Young and the Restless Spoilers: Is Chloe’s Baby Daddy Billy or Kevin – Vote On The Big Reveal 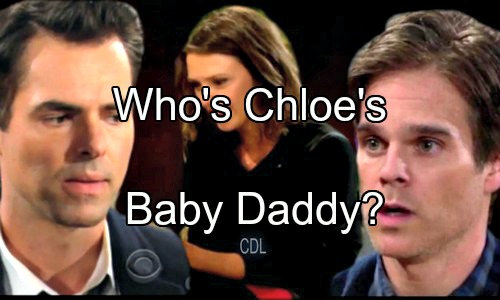 But, who’s the father of the daughter Chloe referenced when she was seen on the show last fall? Will the character of the young actress (Cali May Kinder) recently cast eventually call Billy (Jason Thompson) or Kevin (Greg Rikaart) daddy?

It made sense that the imprisoned ‘Moustache’ would ask Chloe to put poison in a storage locker. The police were tipped off to that planted evidence, which could put Adam in jail for the murder of Constance Bingham (Sally Kellerman). Who on Y&R would be more motivated to frame Adam than the mother of Delia’s (Sophie Pollono) perceived killer?

Chloe continues to hold more than rage in her heart. She also possesses a living secret. And, that little girl establishes a second arc for the reprisal of Hendrickson’s character on ‘The Young and the Restless’.

Stolen genetic material led viewers to believe that Billy was likely the father of Chloe’s second child. She was still deep in the throes of grief at the time she engineered that conception. In Chloe’s tortured mind she believed that the only way to move forward was to will Delia back to life

Billy’s world is always spinning. He’s convinced himself that Phyllis (Gina Tognoni) is his next true love. Yet, it’s obvious to all fans of ‘The Young and the Restless’ that his emotions are still heavily influenced by whatever Victoria (Amelia Heinle) does.

Plus, Phyllis may never agree to leave Jack. With whatever transpires, Billy would embrace a new daughter. Of course, his realization of that potential fact surely could take months to play out.

However, it’s just as possible that another man Chloe cares for could be shocked to learn that he’s a father. Time frames would allow Kevin to be so honored. If he’s the dad, Natalie (Mara McCaffray) and Mariah (Camryn Grimes) would have their lives impacted as well.

What do fans of ‘The Young and the Restless’ spoilers think? Is Billy or Kevin the father of Chloe’s second child? Vote in our poll below and come back to CDL for tons more Y&R spoilers and news!