The Young and the Restless Spoilers: Jack Forces Phyllis Out of Town, Leads to Passionate Kiss – Reconciliation Begins

BY Marcy Cohen on November 10, 2016 | Comments: one comment
Related : Soap Opera, Spoiler, Television, The Young and the Restless 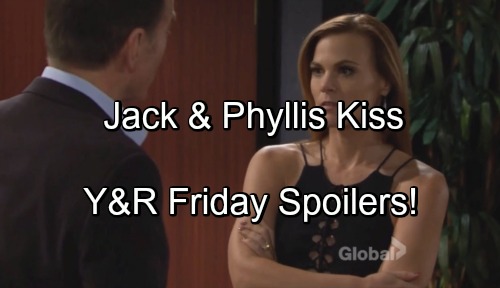 The Young and the Restless (Y&R) spoilers for Friday, November 11, tease that Jack (Peter Bergman) will decide to give Phyllis (Gina Tognoni) a promotion. However, this isn’t about rewarding Phyllis. This is about getting her out of the picture. Jack will inform his ex that she’ll be heading up a whole new division of Jabot. The catch is that it will require relocation.

Jack is hoping that he can send Phyllis to New York and be done with her. He’s probably finding it difficult to battle the pain day after day. Every time Jack looks at Phyllis, he can’t help but think of what could’ve been. Jack wanted to share a beautiful life, but Phyllis threw it all away by sleeping with Billy (Jason Thompson).

Jack has made it perfectly clear that he wants nothing to do with Phyllis. He let her help out with the plan to bring down Victor (Eric Braeden), but that was just a sacrifice for the sake of revenge. Jack is grateful that Phyllis came through for him when things got tricky, but it’s not enough to make up for her previous actions.

Perhaps Jack thinks this promotion will be a win-win. Phyllis would get a cushy new job and Jack wouldn’t have to deal with her. Of course, this isn’t what Jack wants deep down. It’s easy to see that Jack is longing for Phyllis. He just doesn’t know how to forgive her.

The Young and the Restless spoilers say Phyllis will protest when she hears the relocation news. She’ll suggest that this has Ashley (Eileen Davidson) written all over it. Phyllis felt like she was making progress until Ashley planted doubt in Jack’s mind.

Jack will insist that he knows what he’s doing, but Phyllis will want another chance. She’ll give Jack a passionate kiss in the midst of their quarrel. Meanwhile, another set of exes will grow closer. Victoria (Amelia Heinle) will bring a problem to Billy and they’ll work through it together.

By the time day is over, Billy and Victoria will be in a really good place. That’s more than we can say for Victoria and Travis (Michael Roark). Victor has been a major source of contention. Travis doesn’t think he fits in with the Newman clan and that fact will continue to cause drama.

Speaking of drama, Y&R spoilers state that Michelle (Kelly Frye) could cause some of it as well. Travis will try to figure out why Michelle has shown up out of the blue. Michelle will barely be able to answer Travis’ questions. She’ll be too distracted by Travis’ handsomeness. Michelle has clearly missed the view.

Travis will attempt to stay loyal to Victoria, but it’s going to be tough. He already admitted that he was in love with Michelle once. Now that Michelle is getting a divorce, will Travis reunite with her and leave Victoria behind? Stick with the CBS soap for updates on this possible reconnection.