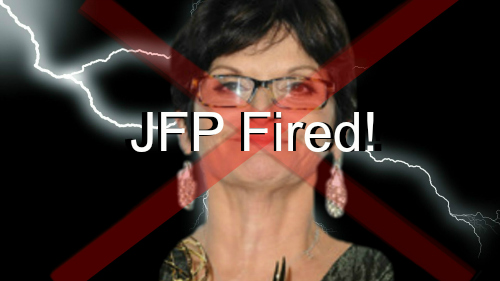 ‘The Young and The Restless’ (Y&R) spoilers reveal that showrunner Jill Farren Phelps has been fired as Executive Producer. This has been swirling since late May after a blind item from Daytime Confidential hinted at an EP shakeup.

Tommy Garret from Highlight Hollywood has confirmed, tweeting with little subtlety, “#JillFarrenPhelps is #Out! The wicked witch is gone!” We wonder if  supervising producer Mal Young, the UK soap import, will be promoted in her place.

#JFPisFiredParty is already trending on Twitter as Y&R fans seem to be thrilled at the executive producer’s ousting. Within moments of Tommy Garrett’s confirmation, Jamey Giddens from Daytime Confidential confirmed that “She was my blind item.”

Of interest is when Giddens leaked the blind item, he said that it would be set up as a resignation rather than a firing but now tweeted, “Oh, and there won’t be any ‘her decision’ stuff as I’d first heard. This is a straight up termination.”

WOW! It’s hard to pinpoint where Jill Farren Phelps went wrong at ‘The Young and The Restless’ and completely alienated fans but in the past 12 to 18 months there have been almost too many letdowns to count.

Losing Billy Miller as Billy Abbott and Michelle Stafford as Phyllis Abbot were both major hits for Y&R. Then there was the abrupt and unsatisfying death of Sage Newman (Kelly Sullivan) and the still unresolved Christian-Sully baby story line.

And lest we forget, Dr. Anderson (Elizabeth Bogush) was killed off and so was her plot line and that left lots hanging. We were promised deaths at the Newman Tower fire and got none, plus it’s been a revolving door of Billy Abbotts.

It might be easier to itemize what Jill Farren Phelps did well in the past few years at Y&R rather than catalog her missteps, but nothing springs to mind that was brilliant. The bottom line is Y&R fans seem unanimously jubilant at her firing.

Let’s hope that this regime change will shake up Y&R and make it much better. We need storylines wrapped up that have been dragging on and fresh exciting plots – not stuff recycled from JFP’s General Hospital days…

What do you think Y&R fans? Are you happy that there’s a shakeup at the CBS soap? Share your comments on Jill Farren Phelps’ firing and be sure to check back with CDL often for more ‘The Young and The Restless’ spoilers and news.