The Young and the Restless Spoilers: Patty Clashes with Evil Dr. A – Sharon Betrays Nick & Sage – Chelsea Threatens to Leave 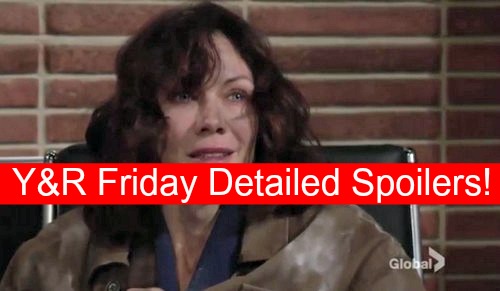 “The Young and the Restless” spoilers for Friday, February 5, tease that Nick (Joshua Morrow) will start fishing for info on Dr. Anderson (Elizabeth Bogush). Sharon (Sharon Case) will pick up on the fact that Nick doesn’t approve. She’ll ask why Nick is allowing Sage (Kelly Sullivan) to be treated by Dr. Anderson.

Nick will decide to come clean about his plot with Sage. He’ll mention that Dr. Anderson kissed him and he’ll urge Sharon to believe that something’s up. At Fairview, Dr. Anderson will pressure Sage to tell her what she wanted to give Nick updates on.

Sage will say it was about telling Sharon she could see Sully.

Dr. Anderson will brush off Sage’s idea as an obsession. She’ll insist she should focus on the experience of losing Christian. Sage will try to roll with it. She’ll say that she blames Nick for taking her to the benefit while Christian was dying.

At the police station, Paul (Doug Davidson) will find out that Patty (Stacy Haiduk) has been living on the streets. Patty will greet Paul in his office and he’ll question her about the fire at Newman Enterprises. Patty will talk about how she helped Ian (Ray Wise) escape.

At Newman Enterprises, Luca (Miles Gaston Villanueva) will be pretty pleased with himself. Adam (Justin Hartley) will warn that Luca shouldn’t get too cocky. Victor (Eric Braeden) will be coming for him. Adam will receive word that Noah (Robert Adamson) is about to confess and he’ll race to the police station to stop him. Luca will come along as well.

At the station, Adam will insist that Noah can’t do this. It would crush Sharon. Noah will eventually agree not to turn himself in. He’ll approach Luca about forming an alliance against Victor. Marisa (Sofia Pernas) won’t be on board with this collaboration at all.

Back at Fairview, Nick will stop by to see Sage. He’ll tell her about his conversation with Sharon. Sage will be upset that Nick shared their secret, but he’ll insist they have something more important to discuss. Nick will tell Sage to listen carefully to what he’s about to tell her. Y&R viewers will be anxious to hear what Nick has to say.

Other “Young and the Restless” spoilers reveal that Chelsea (Melissa Claire Egan) will get fed up with her constant battle with Adam. After Marisa refuses to provide any info, Chelsea will take drastic action.

She’ll threaten to move out with Connor (Gunner and Ryder Gadbois) if Adam doesn’t start talking. Adam will agree to spill everything. How will Chelsea react to Adam’s confession? Stick with the CBS soap to see if Chelsea and Adam can reach an understanding.