The Young and the Restless (Y&R) Spoilers: Locked Up In Fairview – Dr A Pushes Sage to Madness After She Learns Christian Alive 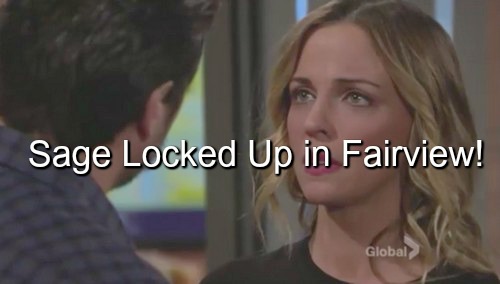 “The Young and The Restless” (Y&R) spoilers hint that now that Sage Newman (Kelly Sullivan) is under Dr Sandy Anderson’s (Elizabeth Bogush) control in Fairview, she will discover the horrifying fact that her son Christian is still alive. This revelation sets Sage up for a deadly mental health crisis that Dr A orchestrates.

Nick Newman (Joshua Morrow) isn’t happy that he had to commit Sage to the sanitarium but he was masterfully manipulated by Dr A. Now Sage will pay the price for Nick’s naiveté. Sage will initially be kept from seeing anyone while Dr Anderson medicates her and tampers with her brain.

The one benefit to Sage being in Fairview is that it gives her access to Dr A and her minions. In a semi-lucid moment, rumors say that Sage may learn that Christian is alive when she overhears Dr Anderson chatting with a nurse who helped with the dead baby swap plot.

Sage will discover that not only is her son alive, but he’s Sully – and in Sharon Newman’s (Sharon Case) hands. This will enrage Sage at Dr Anderson. No doubt she’ll attack her, likely physically, and that will justify Dr Anderson drugging her to the gills.

Then, when Nick is finally allowed to visit, Sage will be drugged up and rambling that Christian is Sully and she wants her baby back from Sharon. Although this will be absolute gospel, this feeds the lie that Dr A told Nick and Sharon – that Sage is obsessed with baby Sully.

Sage will be angry and hurt that no one will listen to her about Christian. This whole scenario makes Sage look like the raving lunatic that Dr Anderson has made her out to be. The problem is, now that Sage knows the truth, Dr A can’t take the risk of someone believing her about the babies.

Y&R spoilers tease that Dr Anderson can easily convince Nick that Sage is despondent over the loss of Christian and has had a break from reality. She can tell Nick that she’s worried Sage may harm herself and lay the groundwork for her next big move.

Could Dr Anderson kill Sage in a staged suicide? Now that Sage seems to be fixated on the preposterous notion that Sully is her child and raving about Christian not being dead, she seems completely unhinged and neurotic about Christian. With this going on, suicide is plausible.

This would allow Dr A to dispose of Sage – who is on to her and was asking all the right questions and churning doubt about Dr Anderson’s motives. Now Dr A has to get rid of Sage in such a way that it can’t be traced back to her – suicide is perfect.

Sage’s suicide would absolutely wreck Nick – and we all know that ruining his life is Dr Anderson’s end game. Dr A will tell Nick that he should have listened to her weeks ago and not pressured Sage to resume their marriage and to let her grieve on her own.

This sets Sage up to be offed by the insane doc – and sets Nick up to blame himself when it happens. The wrinkle that Dr A doesn’t count on is Adam Newman (Justin Hartley). Adam is also grieving the loss of Christian, but has a better perspective than Nick since he’s not neck deep with Dr A.

What do you think Y&R fans? How far will Dr Anderson push Sage before she snaps? How long will Sage remain under the evil doc’s control before Adam swoops in to rescue her – leaving Sage hurt that it was Adam and not Nick that had faith in her and saved her?

Don’t miss a moment of the hit CBS soap and check back with CDL often for more “The Young and The Restless” spoilers, recaps and rumors.