BY Heather Hughes on March 31, 2016 | Comments: one comment
Related : Soap Opera, Spoiler, Television, The Young and the Restless 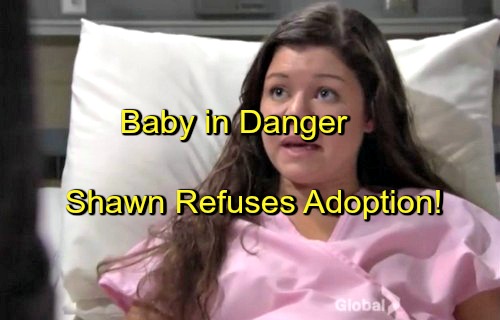 “The Young and the Restless” spoilers for tomorrow’s episode, Friday, April 1, tease that the recent birth of Shawn’s (Devon Martinez) baby will cause quite a stir. When Sharon (Sharon Case) discussed her experience with adoption, things took an alarming turn. Shawn became upset and went into premature labor.

Of course, we don’t know that the conversation actually caused Shawn’s contractions. David may have a medical problem that caused him to arrive sooner than expected. Still, it’s clear that Sharon feels responsible.

Sharon will explain that Nick (Joshua Morrow) and Sage (Kelly Sullivan) might lose their little boy. If that happens, Sharon will feel like it’s all her fault. The guilt will take a toll on Sharon while they wait for updates on the baby’s condition.

Other “Young and the Restless” spoilers say Shawn will expect to hear some news as well. Right after David’s birth, Shawn suddenly seemed very protective. It sounds like Shawn’s maternal instincts are kicking in.

Shawn demands to see her son and now she’ll want answers. She just needs to know if David is going to be OK.

The preview clip shows a concerned Shawn asking what Nick and Sage aren’t telling her. She’ll fear that something is terribly wrong. We know that are going to be risks since we’re talking about a preemie.

However, the doctors may have found other health issues by now. Regardless, this baby has a tough road ahead of him in the NICU.

If this child lives, Shawn may feel like she’s endured the battle with him. It could make Shawn change her mind about giving David up for adoption. Y&R spoilers say that this adoption definitely isn’t a done deal. We’ll have to see how the Christian reveal changes the game, too. Stick with “The Young and the Restless” to find out what Nick and Sage’s family will look like.

So Y&R fans, what do you think about Sharon’s guilt over Shawn’s birth? Will the doctors discover a health issue actually prompted the early labor? Will Shawn bond with David as he fights to survive?