‘The Young and the Restless’ Spoilers: Should Sharon Be Sent to Prison for Christian Lies and Cover-Up? 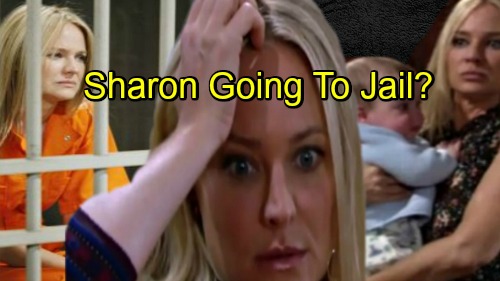 The Young and the Restless (Y&R) spoilers tease that Sharon (Sharon Case) will do everything she can to keep Sully’s true identity a secret. Thanks to Patty (Stacy Haiduk), the pressure is on. She’s threatening to blow this wide open and that could be a huge problem for Sharon.

The Young and the Restless spoilers say Sharon will come up with a scheme to keep Patty’s mouth shut, but this is only a temporary solution. Despite Mariah’s (Camryn Grimes) efforts to help, the big reveal is coming anyway. Sharon and Mariah are simply prolonging the inevitable.

Once Dylan (Steve Burton) and Nick (Joshua Morrow) learn the truth, Sharon’s day of reckoning will arrive. Mariah will undoubtedly pay the price for pitching in, but Sharon is the worst offender here.

She’s known the longest and it was her responsibility to carry out Sage’s (Kelly Sullivan) last wishes.

Instead, Sharon has nearly driven herself off the deep end by trying to keep everything under wraps. Of course, there are several ways to look at this situation. We can’t forget that Sharon is bipolar.

Some viewers think Y&R relies solely on that excuse too much, but we can’t ignore the diagnosis. Like it or not, that’s always going to be a factor for Sharon.

Sharon tried to protect Dylan by lying about her miscarriage and that obviously wasn’t the best move. However, Sharon had no reason to question it when she was told she was pregnant again. She thought her plan had worked.

From that point on, Dr. Anderson (Elizabeth Bogush) made sure Sharon was always pumped full of drugs. She had no idea what was going on.

Sharon can only be blamed for what happened after she got confirmation that Sully was Christian. Sage’s sudden death really threw Sharon for a loop. She was clearly shaken up. Sharon nearly came clean a couple of times, but she just couldn’t do it.

Y&R fans know that Sharon is absolutely terrified about having Sully ripped away. She naturally became attached to the baby she assumed was hers for months. Any mom would have trouble giving up the child she’s grown to love.

Now let’s consider the other side of this. Sharon has been watching Nick suffer while she lives it up with his kid. Dylan and Sharon are enjoying their happy family. What does Nick have? His son and wife are gone.

Getting Christian back would’ve been a great comfort after Sage’s passing.

Nick isn’t actually Christian’s father, which means Adam (Justin Hartley) was hurt by Sharon’s actions as well. She doesn’t know that yet, but she will eventually. Sharon had her reasons for staying silent, but do they justify the pain she caused? It’s a tough call.

After Sharon’s deception is exposed, what will her fate be? Should The Young and the Restless send Sharon to prison or is that too extreme? Should Sharon just be the town pariah for a while?

It’ll be interesting to see how the CBS soap punishes Sharon. We’ll give you updates as more news comes in. Vote in our poll and don’t forget to check CDL often for the latest Young and the Restless spoilers, updates and news.