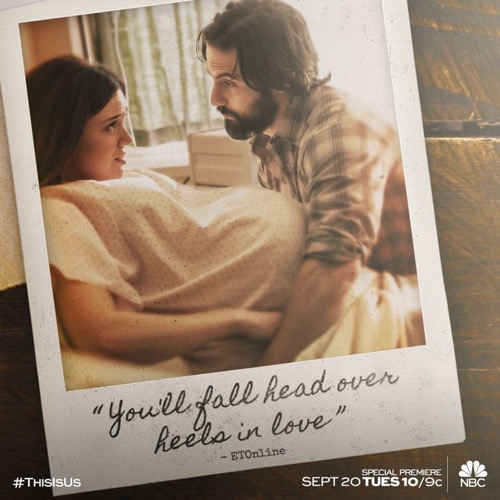 Tonight on NBC their new honest & provocative dramedy series This Is Us premieres with an all-new Tuesday, September 20, 2016, episode and we have your This Is Us Recap below.  On tonight’s This Is Us series premiere, Several people whose lives are mysteriously intertwined begin to notice peculiar coincidences about each other.

On tonight’s This is Us premiere episode as per the NBC synopsis, “The series follows a unique ensemble. As their paths cross and their life stories intertwine in curious ways, we find that several of them share the same birthday and so much more than anyone would expect.”

So make sure to bookmark this spot and come back between 10PM – 11PM ET! for our This Is Us recap.  While you wait for the recap make sure to check out all our This is Us recaps, spoilers, news & more, right here!

‘This Is Us’ Series Premiere Meet Four People Who Share a Birthday, Is There More Than Just A Date That Connects Them?

This is a fact: According to Wikipedia, the average human being shares his or her birthday with over 18 million other human beings.

There is no evidence that sharing the same birthday creates any type of behavioral link between those people.

If there is… Wikipedia hasn’t discovered it for us yet.

Mandy Moore portrays a very pregnant woman carrying triplets, named Rebecca, who is forced to perform a seductive dance for her husband, Jack (Milo Ventimiglia), who is celebrating his 36th birthday. The show starts out with a giggle because she is wearing the lingerie over her clothes because none of it fits her Jack tells her “tradition is tradition”; and she dances!

As soon as she is able to get onto the bed, all she wants to do is sleep, but her water breaks and they rush to the hospital. Jack mentions that he and the babies will share the same birthday, but point out the obvious, it’s too soon. She is 6 weeks too early. Dr. K (Gerald McRaney) walks in, saying he is replacing Dr. Schneider whose appendix just burst. He calms Rebecca down and says he knows all about the triplets and the high-risk pregnancy and he will take care of her.

We are then introduced to Kate (Chrissy Metz), who opens the refrigerator, and finds notes everywhere about what is good and what is bad, which indicates to us that she is struggling with being seriously overweight. The last note she reads is on top of a birthday cake, which reads, “Do not eat this cake before your party, Kate. Love Kate”. She rips off the sticky note, only to find another one underneath it saying “Seriously, what is wrong with you?”

We jump from there to the office of Randall (Sterling K. Brown), who we find out is also celebrating his 36th birthday when his employees barge into his office singing and carrying a cake. Randall goes to see his kids play soccer, and is talking to who we can assume is his wife or ex-wife. He tells her that he has found his father, but doesn’t want to meet him because of all the bad things he has learned about his dad. Alcoholism and abandonment. Is Randall ready to end the search or does he need more answers?

Soon we are introduced to Kevin (Justin Hartley) looking all depressed, even though he has two hot women in his bedroom with him. He announces that he is 36 today and just sits up on the bed with a drink in his hand. Kevin is an actor, who hates the role he is playing. He is a manny, who says the dumbest things ever. When he cuts the scene and speaks to the producers, they threaten to find Ryan Gosling or someone better. Kevin says Ryan Gosling would never do this and the producer agrees. Id Kevin about to walk away from his career as an actor, if so, what will he do with his life?

After the initial introduction of the main characters, we start to see some depth to them. Kate is struggling with her weight and is trying to remove everything just to see herself lighter, right down to taking her jewelry off. It’s at this point, that we learn that Kevin and Kate are twins. She calls Kevin and he races over to be with her, and together they eat ice cream on the bathroom floor. Kevin helps her through her “episode” and returns to work, where he experiences his own depression.

Kate attends a support group for overweight or obese people. A man chats with her briefly and she says she can’t have a fat friend. He tells her then he needs to lose the weight, she smiles. Is Kate in this for the long haul? Does she really intend to change her lifestyle and get healthy?

Dr. K enters the labor and delivery room and is about to share the news with Rebecca and Jack, but he doesn’t want to hear it. Rebecca says they need to listen, but Jack cuts him off and says he is leaving the hospital with his wife and three babies. Dr. K doesn’t finish what he is saying and leaves the room again. What are the complications here and will these babies survive, or is it about his wife?

Randall had said that he was done searching for his father, after learning he was an alcoholic and abandoned him. He lied. He bangs on this door, and when the man opens it he says,

“My name is Randall Pearson, I’m your biological son. Thirty-six years ago, you left me at the front door of a fire station. Don’t worry, I am not here because I want anything from you. I was raised by two incredible parents. I have a “lights out” family of my own, and that car you see parked right in front of your house cost $143,000.00 and I bought it in cash. I bought it for cash because I felt like it, and because I can do stuff like that! You see, I turned out pretty alright! Which might surprise a lot of folks considering that 36 years ago, my life started out with you leaving me on a fire station doorstep, with nothing more than a raggedy blanket and a crap-filled diaper.”

Randall pauses before he continues.

“I came here today, so I could look you in the eyes and say that to you and then get back in my fancy-ass car to finally prove to myself and to you and to my family who loves me that I didn’t need a thing from you; even after I knew who you were!”

After the rant, his father asks him if he wants to come in and he does. Randall continues to feel anger, but his dad explains that he doesn’t remember that day, but he is clean now. He also says that the life he is living now is punishment enough. It’s a whirlwind with these two. Randall tells him “Screw you”, but then comes back in and asks if he would like to meet his grandchildren.

When Randall brings his biological father home, his wife isn’t sure what to think, and by the way, Randall is acting, she thinks he may be in the middle of a “breakdown”. Before he leaves, he tells Randall that he is dying; that he is no longer just sick, he is beyond that point. How will this affect Randall, now that he has released all this anger, what is he left with? Will he be there for his dying father?

Alan Thicke makes a guest appearance, portraying Kevin’s father on the TV show he acts in. Kevin (Justin Hartley) is thrilled with the scene they just played, but the producer and writers are telling him to take his shirt off and get back to being the “Manny”. Kevin loses control and has a complete meltdown on live TV; yelling at the fans and leaves the studio.

Kate agrees to go on a date with Toby, even after she said told him she couldn’t have a “fat” friend. They have a great time at dinner, and Toby comes in for a recap. Kevin interrupts them and tells his sister that she would have been proud of him for doing what he did. The three of them start drinking together, and its Kate’s turn to be the rock for Kevin.

Rebecca is in labor and delivers the first baby, a boy. Rebecca cries that something isn’t right and the doctors rush her into surgery, leaving Jack on the outside looking in. Dr. K comes out to tell Jack how everything turned out. They need to monitor Rebecca, and that they have a healthy baby boy and a girl, but the third baby boy didn’t survive. He was still-born, and there was no way to save him.

When Jack wants to go see his wife, the doctor tells him she needs to rest, and that he should go meet his babies because they want to meet their father and that they have a good one! As Jack is standing at the window of the nursery, he asks the man next to him, which baby is his, he says, “None of them actually, strangest damn thing, someone left a newborn at my fire station. I didn’t know what to do, so I brought him here!” and he points to a newborn African American baby boy, the same as Randall!

“Life is strange” were his last words. You see Jack tell Rebecca what happened, but when the music for the ending of the episode starts, you see Jack and Rebecca hold hands as they lay all three of their babies down in their bassinets. They have taken the abandoned child home. Is life coming full-circle, or is there a lot more to this story than what has been revealed?

Be sure to tune into NBC’s This is Us on Tuesday, September 27, 2016, at 10 p.m. ET and check Soap Opera Spy often for updates, news, rumors and spoilers!