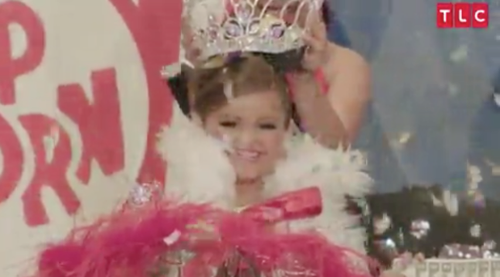 Tonight on TLC Toddlers & Tiaras returns with an all new back to back Tuesday, August 16 season 7 premiere called “Showdown Throwdown” and we’ve got your Toddlers & Tiaras recap down below. Tonight, season 7 begins with a clash between Cambrie’s Court and the Sassy Supremes.

On last season’s finale, Tavern and mom LaNesia are back; former beauty queen India and her daughter Aja clash in practice; Jaidyn and her mother Tiffany take on Dr. Seuss as a historical figure.

Ms. Eden Wood was once the glitziest and most iconic girl in the Pageant World however, it’s been a long time since TLC showed new episodes of “Toddler & Tiaras” and so we haven’t gotten a chance to see what little Eden was now up to.

So to kick off this latest season, the show decided to go down memory lane with Eden as well as show glimpses of what’s ahead. But certain memories from the show weren’t all that good. Eden had had some competition back in the day and the rivalries that came from it had brought out the worse in people. Like the mothers mainly who had taught their daughters from early on that they had to beat Eden at all costs.

Take little Janene and her mother for instance. Janene was a cute little girl like all children were and she seemed to truly enjoy the makeup aspect of beauty pageants. However, her mother on the other hand, had taken the whole competition thing a little too far. The mother had bought an old dress of Eden’s and had told Janene that they were going to beat Eden with her own dress. So that hadn’t seemed like the right thing to tell a child yet the mother had gotten pretty worked up and had told her daughter that she now had a winning dress.

Yet, Janene did not win with that dress. She had practiced everything from her routine to her walk, but the judges ultimately felt that there were other contestants that did just a little bit better. Like Eden and even Eden’s number one nemesis! It turns out that Janene’s mother had been so focused on Eden that she also ended up forgetting about the other little girls there and how they were also a threat. So the fact that Taralyn was there and that Taralyn had once beaten Eden hadn’t even registered with Janene’s family until pageant day and by then it was too late.

Eden was considered the threat because she always had truly great costumes although that particular time no one had suspected that she would go up on the stage with her own doll much less a whole showgirl routine. But the other contestants and pageant moms had definitely gotten catty. They said that she had too much on stage and that the doll was one step too far. And yet Janene only got the ambassadorship which is handed out to little girls that bought up the most advertising space in the magazine while others like Eden and Traralyn actually titled.Taralyn went on to win Queen and Eden ended up winning Grand Supreme. So both little girls had placed much higher in that Showdown Throwdown than certain a someone that

Taralyn went on to win Queen and Eden ended up winning Grand Supreme. So both little girls had placed much higher in that Showdown Throwdown than certain a someone that griped. Yet, the next glitz pageant had its own share of misconceptions. The next Showdown Throwdown had a room full of mothers that didn’t believe that they should allow their children to go full glitz and, while that’s a sentiment that many adults share, a specifically glitz pageant was not the type of place to make that statement. Especially as there were plenty of other natural and even partial glitz pageants out there.

So little girls like Mercedes who didn’t have makeup on, a tan or even a bucket load of extensions were usually quickly forgotten when compared to Eden Wood. Mercedes was bright and bubbly little girl who did hit all of her marks onstage so she was a joy. However, Mercedes’s parents didn’t realize what they would be up against until pageant day and then it had been too late for them to have done everything they regretted. Like not spending enough on the dress, or skipping out on the professional work like makeup, tanning, and possibly a coach. And so Mercedes’s mother Amanda said that she was going to remind her husband at their next pageant that he had actually been more vocal about how they should have spent more.

Though it turns out Mercedes was a unique child and case. Mercedes actually had a higher title than Eden who was admittedly more done up than her. So it had been shocking conclusion when Eden got Talent Supreme while Mercedes went on to win Grand Supreme however Eden wasn’t someone that was familiar with losing. Eden may have a few competitions here and there when she didn’t place first, but her mother Mickie knew that they could turn it around at the next competition. Even if the next battle didn’t go as smoothly.

The next pageant they showed had a few upsets as well. Eden’s hair didn’t come out as her mother wanted it to and she had a little tantrum where she began crying for what looked like no apparent reason. So her mother Mickie had been just one step from simply pulling her from the competition altogether when Eden decided that she did want to compete. And so Eden had remembered that she was pageant girl in the end. But her biggest competition at that pageant had been Alexis. Alexis and Eden had shared the same talent agent so they knew that Heather had seen something special in the both of them.

Speaking of Heather, though, there had been more a few angry mothers that hadn’t liked the fact that the director of the pageant had a personal relationship with two of the contestants. So they had called the competition rigged. They said Heather was naturally going to be talking up Eden and Alexis to the judges so one mother felt that the competition had all been for show while another had said that she would have stayed home if she had known Eden would be there. Yet, Heather had defended her position because she said that all she would be doing was announcing names and telling the judges what the criteria was.

And yet it had later been revealed that Heather had downplayed her role in the pageant because one of the judges had made a comment. A judge had said that the directors had a lot of leeway with the judges and that they could sometimes point someone out to them. Which was what the mothers had worried about. So those same mothers had gotten upset when both Alexis and Eden pulled for a higher title. Although, their reactions hadn’t been as bad as when Alexis won Mini-Supreme because everyone had been on edge about who won Grand Supreme that was called World Champion in this case.

So there had been parents ready to revolt when Eden won World Champion. That it seems had proved to them at least that the competition was rigged and that their kids had only been part of the competition so that it looked legitimate. Though, no matter what they thought, they couldn’t change the results and so Eden got to keep her title. And in the next Showdown Throwdown, she went up against another little girl that had once beaten her to the Grand Supreme title.

MaKenzie now was probably just as famous as Eden. MaKenzie had made a name for herself because of her previous meltdown as well as the fact that she liked to use her pacifier during those breaks. However, with time, MaKenzie was able to ditch the pacifier and her mother swore that she wasn’t the spoiled brat that many people assumed she was. So her latest battle with Eden was supposed to reassert that she was the pageant girl to beat and that she had matured since her previous competition, but despite what they wanted to happen, MaKenzie’s team still had a few backstage problems.

First Makenzie had put up some fuss when it came time to put her in her costume for the eighties theme. So that had been some valuable time they lost because the little girl had gotten into an argument with her mother about being pinched to death and then she had followed that up by watching her mother while she was up onstage rather than looking at the judges. Which was unfortunate because the judges do take points away for that. Yet, there was some confusion surrounding the title that MaKenzie did get.

MaKenzie won the title Future Queen and the director had announced her name with others when said that she was a future winner. So no one on MaKenzie’s team knew what that meant because they weren’t sure if that meant she didn’t win a title at all or if she could still pull for a higher title. But the confusion was soon cleared up when all the Supreme Titles were announced and Eden came in second with Grand Supreme title while MaKenzie didn’t place at all. Instead the title Ultimate Grand Supreme as well as the Princess Canopy Bed that went with it went to another girl named Alex.

So the truth didn’t hit either girls until Alex won the bed and they realized that they hadn’t won the title they wanted.

But while both girls later got over that defeat, MaKenzie had decided to stay on in the pageant world meanwhile Eden had decided to walk away and moved out to California to begin her acting career. So you know what means. It’s now time for other little girls to take the stage and this upcoming season promises to show off bigger rivalries and even more mothers that are a little bug-eyed when it comes to winning the Grand Supreme title.