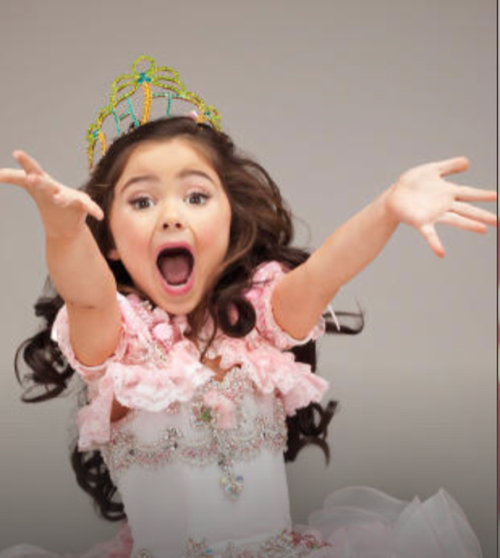 On last week’s episode, Cambrie has Kailia, Callyn and Emily face off against Alycesaundra and Giavanna, past winners of the Me and My Pet Pageant. If You missed it we have a full and detailed recap, right here for you!

On tonight’s Toddlers & Tiaras episode as per the TLC synopsis, “At the Me and My Pet Pageant, chaos ensues when Aly and Gia’s goat, Blackberry, allegedly poops all over the floor – and neither Kelly nor her husband will clean it up! Will the goat poop incident distract the contestants from performing their best?”

The Me and My Pet Pageant was back however, the thing about pets is that often make a lot of mess and sometimes they should have been left at home or on a farm. So one pageant mother in particular, took things too far when she allowed her daughter to bring a baby goat to the pageant. The goat was cute and admittedly the little girl did have a cute goat costume as well. But the goat literally went to the bathroom everywhere and no one wanted to pick it up after it. Especially the people responsible.

Kelly who had two daughters at the Me and My Pet Pageant had been told by one of the other mothers that it was her child’s goat that was creating such a mess backstage and that she was responsible for what it did yet she didn’t care and neither did her husband. They both felt it should be someone else’s job to clean up the goat droppings and Kelly had even told one of the mothers to have it when they had said someone should clean up after the goat. So Kelly and her husband had made it difficult on everyone because it wasn’t like the goat was in a separate area.

The goat had been in dressing and makeup area. So all the mother that were trying to get their children ready for the stage had suddenly found them wading through goat droppings and so naturally a lot of the mothers had gotten frustrated. They couldn’t put down their babies on the floor and some of the girls also couldn’t practice backstage like they normally would because they couldn’t risk taking off their shoes. However, the parents did complain to management and so someone from the hotel had tried talking to Kelly and her husband though again it didn’t matter.

She and her husband continued to be difficult and they claimed that it had been someone else’s animal that had the mess. So there wasn’t much that management could do. They had a couple denying what everyone saw and they couldn’t exactly force them to clean up after that damn goat. So management had to clean up after the goat themselves and that had riled up the pageant moms more than anything. They couldn’t believe that a couple was denying responsibility to such an extent and they had even told the workers that had been brought in to clean that they were sorry.

Sorry that one couple was making all of them look bad. Yet, Kelly and her husband didn’t like being confronted and so things got pretty ugly when some of the others had tried telling them that they should be helping the hotel by cleaning up because that’s when the couple went into a fall on rant. They began swearing at the others and had also told them to pick up the goat droppings as well as rabbit droppings to see if they could tell the difference. They were apparently of rabbits so that’s what the couple tried to blame the droppings on.

Only things got worse when no one believed them about the rabbits because their attitude had been nasty from the beginning. So that’s when the couple took things even further and basically called their youngest for their daughter in front of everyone and told her that she had to clean up after her goat because the others wanted to see a Cinderella story, but that’s not what they were asking and they later told Kelly that she shouldn’t blame them for her daughter crying. They said that it wasn’t them that had yelled at the little girl and so it wasn’t them that had frightened her.

But of course the couple didn’t it see it that way. They believed everyone was being especially harsh to them and that helped them play the victim. Even when one of their daughters went up onstage as a deranged pageant mom that was trying to get her pet pig to smile to the judges. So everyone had needed space from each backstage and that helped them to return their focus back on their children. And they were some familiar faces in the pageant. There was Kailia with her mother Marcy and the latter did try to stay out of the fray backstage. And there was also Cambrie.

Cambrie had more than one girl in the competition yet she tried to help all of them. Which was pretty hard considering there was just this one judge who didn’t care for Cambrie’s girls or their intricate routines. The judge seemed to like Kelly’s girls surprisingly. She had thought that one about the crazy pageant mom was funny even when no one else on the panel got it and she truly liked Aly who she thought was cute with the goat. So the judge who had loved seeing those acts had said that Kalila’s parrot was boring.

The judge thought it was boring that the bird just sat on the same stand that Kalila was doing an entire routine around and she had also thought that maybe Kalila should have brought a rabbit like everyone else. So it was a bit shocking that there one judge that didn’t seem to care for some of the bigger or theatrical routines and had instead preferred something simpler. Yet, that one judge wasn’t the only one on the panel and so neither of Kelly’s daughters pulled the largest titles. She had a daughter that won divisional queen and another daughter that pulled beauty supreme.

However, the pageant to do something different this time around and they decided to call up the top five to the stage. So that way they could announce who came in what position and the finally two would have to come forward like they do in bigger pageants, but that had upset some of the mothers. They were nervous wrecks already and finding out that the process was going to be dragged out had truly been stressful. And yet when the Mega Grand Supreme finally announced – both Marcy and Kailia got to celebrate.

Kailia had come far in the competition world and fortunately one judge hadn’t been enough to start her from winning Mega Grand Supreme.