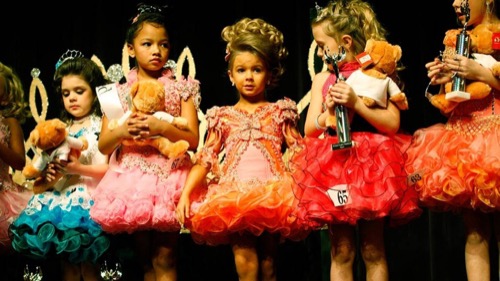 Tonight on TLC  their child beauty pageant show Toddlers & Tiaras airs with an all-new Wednesday, September 7, 2016, episode and we have your Toddlers & Tiaras recap below for you! On tonight Toddlers & Tiaras Season 7 Episode 3, a mom gets kicked off the team, and another is accused of lying about her child’s age at a pageant run by Jaimie’s mom.

On last week’s episode the Jungle Safari Pageant roared on. Cambrie’s kids were on point; Jaimie’s were not. Kallyn got confused. Selyse wandered off stage. Fed up, Kim asked Cambrie to coach Selyse.

On tonight’s Toddlers & Tiaras episode as per the TLC synopsis, “Jaimie and “Cambrie take their teams back to the west coast to prepare for Gemstars Heroes v Villains Pageant-run by Jaimie’s mom! Tensions on both sides flare as one mom gets kicked off the team while another is accused of lying about her kid’s age.

The Sassy Supreme’s, Jaimie and the girls are having a meeting about a Kim switching to Cambrie’s team. The meeting comes after Sheena told Kim that Jaimie is a glorified babysitter and not much of a couch. Kim is feeling alienated. She wants to rebuild trust by the other mom’s don’t seem happy. Jaimie tells Kim to come to her with her issues. And not to seek advice from Sheena. Kim thinks everyone is gossipy. She isn’t sure if she can trust Jaimie. One of the mom’s gives Jaimie and ultimatum – Kim goes or she goes.

Meanwhile, Cambrie is meeting with her girls, celebrating their wins. She also makes an announcement that she doesn’t like Mama Drama. Deb thinks everyone should grow up. Cambrie wants to focus on winning.

Kim is feeling attacked. She starts to cry. All the moms are going at her. The claws are out. One of the mother tells her to grow up. Jaimie tells Kim she doesn’t want to all the negativity and tells Kim she is off the team. Kim is still going to take her girls to the pageant without a couch.

Jaimie gets right back to business to prep for the Gem Star pageant that is run by her mother.  Cambrie is also prepping her girls, hoping that because Gem Star pageant is run by Jaimie’s mom there won’t be any politics interfering. She is game and she is determined to win.

Cadence is introduced, a pageant contestant who her mom calls the boss. She is part of the Sassy Supremes. With a room full of crowns, she is looking for more. Her mothers think she is a miracle. She was going born with cancer and at 3 months old she had to have her adrenal gland removed.

When Jaimie comes over to teach Cadence, she doesn’t want to practice. She refuses, sitting down and crying. She doesn’t want cameras on her or to wear a microphone. She wants it all off.

Katie, Piper’s mother, is ready for her daughter to kick some serious sass. She is very competitive. Kids are sacred of her because they know she is going to win. Katie was a pageant girl. Harley’s sister is also competing.

Katie thinks Cambrie and her team aren’t a threat! Meanwhile, Kaylee from Cambrie’s team is ready to light up the stage at the Gem Star Pageant. Kaylee’s mother is also ready to beat the competition. Kaylee’s been competing since she was 2 years old.

Kaylee’s mother thinks that they wont win – its fixed because Jaimie’s mother is running it. Kaylee’s mother doesn’t like Piper’s mother at all.  Kaylee is battling a speech stumble but that isn’t going to stop her from getting on stage and talking to everyone.

Cambrie brings in her magician friend Jackson to help Kaylee prepare for her magic act. Kaylee will have pyrotechnics in her act. When they test out the fire paper, Kaylee lets out a scream along with her mother and Cambrie.

We meet Caitlyn, a 5 year old in Cambrie’s Court. She started at 14 months old. She doesn’t do the nails, she wins with her smile. She wants to win a huge crown. Cambrie thinks she is beyond cute. Caitlyn was cheated the last time she competed in Gem Stars, according to her mom.

Jaimie is holding a mock pageant with her team to prepare. After some tears, they start to getting dressed and practice smiling. Jaimie helps the girls choreograph their girls’ routines 100%. Piper is at the top for a win. She owns the stage!

Cambrie is bringing her kids to the spa to get them ready for the big day. They are all getting their nails done, their hair and more. The mothers are angry over a bunch of Facebook posts showing Cambrie as a pig. Cambrie thinks its Katie and the others who is behind it.

On to the pageant…..We meet the pageant director, Debbie, who explains that the theme is superheroes vs villains. Debbie is surprised that everyone knows that Jaimie is her daughter – she doesn’t openly tell everyone that.

All the girls are arriving after long rides to the competition. Debbie holds back on her opinion when it comes to some of the moms and their daughters.

The girls get back to prepping and primping with make-up, hair and dress. Cambrie’s mother is also there to help her team and a hair and make-up specialist for her team. After getting ready, the girls eat candy and play with their toys until they are ready to go on. Red bulls and pixie sticks.

Kim showed up without a couch. Katie thinks she likes the attention. Jaimie thinks that things will be the same for Kim since she never listens to her anyway.

Cambrie can’t help Kim because she has too many kids to worry about, but is willing to work with Kim’s daughter after this pageant.

Debbie explains that the morning of the pageant that the parents have to sign off on all of the rules. During the registration process some of the mom’s are asked for a birth certificate. It starts a fight. Debbie has no problem kicking people out. A bad start to the pageant.