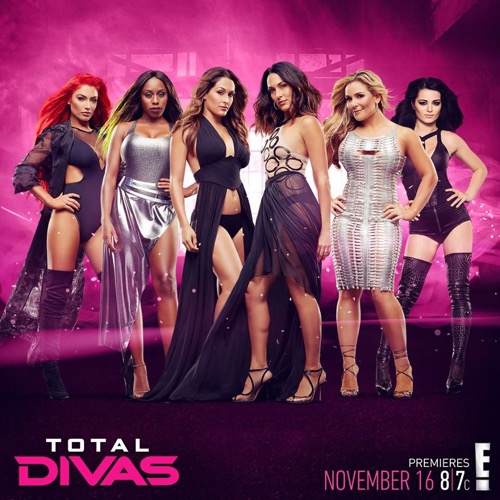 Tonight on E! the WWE’s Total Divas starring the Bella Twins and the rest of the Divas continues with an all new Wednesday, November 16, season 6 premiere called, “Total Superstars,” and we’ve got your Total Divas recap down below! On tonight’s episodes, in the Season 6 premiere, Brie Bella’s swan song is ruined when someone from her past reveals a secret. Meanwhile, Lana is tested when making her Wrestlemania debut.

Tonight’s episode is going to be filled with lots of guaranteed drama that you won’t want to miss, so be sure to tune in for our live coverage of Total Divas tonight at 9 PM ET! While you wait for our recap make sure to check out all our Total Divas’ recaps, news, spoilers & more, right here.

WrestleMania is the biggest WWE wrestling event of the year and unfortunately, 2016 was going to be the last time that Brie was ever going to be a part of it. Brie was apparently retiring for personal reasons and so everyone wants to support her. Especially as it was going to be the end of an era! However, Brie’s husband didn’t want to attend the events despite how much it meant to his wife. So Bryan chose to stay home this year because his own retirement was still a little a raw and he didn’t want to see the games without him. And so he chose to this one out because of his own feelings and not Brie’s.

But this year was special for more than just Brie’s retirement. This year the ladies were called Superstars rather than Divas. So they were finally get the recognition they deserved however there was a slight problem behind the scenes that of course took up much of the women’s attention and it all began with Maryse. Maryse was a retired WWE star and she had gone out dinner with most of the women in the organization and so she began talking about how she was once a Diva. Maryse had said that she started out with the Bella Twins and that they had once been close until something happened.

What happened was that the Bella Twins allegedly betrayed her! Maryse said that they were all supposed to be holding out for a bigger contract with the organization when out of nowhere she found out that she was fired and that the other girls had caved. So Maryse had said that had hurt her and that she was still upset by it, but some of the other women at the table felt that there were two sides to every story and didn’t want to talk about a situation if the Bella Twins were there to defend themselves. Though running to the Bella Twins and telling them what Maryse said had done no one any favors.

Neither Brie nor her sister liked the fact that someone was talking about them behind their back. So Renee had thought that it best for Brie and Maryse to see each other again and possibly talk it out though the two women continued to fight over what happened all those years ago. Maryse still believed that her friends betrayed her and Brie still believed that Maryse got jealous because she and her sister got a contract that she didn’t. Yet, the two of them kept going back and forth before Maryse had finally had enough and chose to walk away. And so Maryse had never gotten her apology and Brie had never gotten her recognition.

However, the beef between Maryse and Brie wasn’t the only thing that happened in the lead-up to WrestleMania. There was also another incident that involved Paige and Trinity. Trinity had unfortunately asked Paige to do her hair because she had wanted something new for the event and, well, Paige didn’t know what the hell she was doing. Paige had bleached Trinity’s hair to no end and she had cut it as well. So there were a few times when people like Lana and Jon had tried to tell Trinity that Paige didn’t know what she was doing yet Trinity had faith in her friend and that faith fell incredible short.

Paige had jacked her hair and there were at least three to four colors in it. But Trinity then tried asking the Hair & Make Up ladies that did the Diva’s hair and they were quite honestly shocked by what they saw. They said that there was no fixing what Paige had done to it and so they gave Trinity the best advice they could. They told her that she was going to have to start from scratch and that was going to need to get hair in the meantime. So that had disheartened Trinity. She had gone to them because everyone else in town was too booked up to see her and so she had thought her old friends were truly her last hope however there was one other option left to her.

Trinity still had her own personal hair stylist back home and so she flew out her team to help put in a few extensions. So Trinity was able to fix her hair and the color ended up being a lot more subtle than what Paige had originally done. Though Paige hadn’t been worried. Paige had known that everything was going to be alright and she even told her friend that she looked good when she saw the finished product, but with the hair situation settled there was still one more thing to worry about because WrestleMania was going to be their good friend Lana’s grand debut. Lana was the girlfriend of pro wrestler Rusev and so she was well known around the arena.

Yet, Lana had never had a professional match before and her first match was going to be 10 Diva fight. So Lana had been nervous beforehand because she knew that the match would make or break her career though she didn’t need to worry as it turns out. Lana had been natural in the ring and she had gotten to have fun with the other girls. They had all played up their rivalry with a couple of laughs in between and Nikki had even showed up at the end to mark her sister’s last match. And to mark a turning point in the Diva’s Revolution – WWE announced their first ever WWE Women’s Championship.

The Championship was a huge thing and all of the Divas were going to be fight for that title yet there could only be one and Nikki Bella had made it known that she was coming for that title.