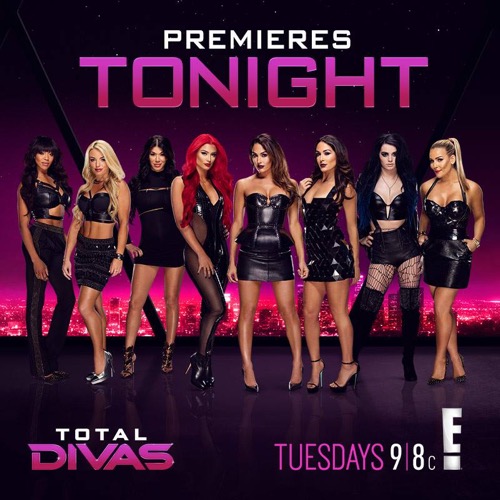 Tonight on E! the WWE’s Total Divas starring the Bella Twins and the rest of the Divas continues with an all new Tuesday January 19, season 5 premiere called, “Love Triangle.” We’ve got your recap down below! On tonight’s episodes, in the Season 5 premiere, Nikki  Bella wonders whether she should tell John Cena about her ex-boyfriend’s advances.

For those of you who don’t know, Total Divas is an American reality television series. The series gives viewers an inside look of the lives of WWE Divas from their work within WWE to their personal lives. Behind the scene footage of the Divas is also included

On the last episode Alicia, anticipating that her ex-boyfriend may be single again soon, toyed with the idea of confessing her love to him; Jonathan took heat for Eva’s bruises; and Paige was offended by Nikki’s classy take on her home turf.

On tonight’s episodes per the E! synopsis “in the Season 5 premiere, Nikki wonders whether she should tell John Cena about her ex-boyfriend’s advances; Paige considers breaking off her engagement; and Brie tries to pave a new career path for Bryan.”

Tonight’s episode are going to be filled with lots of guaranteed drama that you won’t want to miss, so be sure to tune in for our live coverage of Total Divas tonight at 9 PM EST! While you wait for our recap hit the comment, let us know how excited you are about this fifth season of Total Divas and tell us what you expect to happen tonight!

Nikki’s ex-boyfriend Nick had crossed the line on tonight’s premiere of “Total Divas”. Apparently Nick had tried to propose marriage and kids to Nikki. And though she refused to let him hold her hand, he still tried to kiss her.

So Nikki did what came natural. She slapped Nick for what he did and then she pretended like nothing had happened in front of John. The entire incident had happened while they had all been at work and so she hadn’t wanted to cause a scene because she knew that John needed to be professional for an interview.

And there was also the matter of Jon having to work alongside Nick. WWE was heading to Japan for a big competition and Jon was going to be on the same tag team as Nick. Therefore, Nikki didn’t want to bring up Nick’s betrayal right before the two men had to work together.

But the longer she sat on the issue, the more she feared John’s reaction. Nikki hadn’t wanted him to think that she had stayed silent because she had considered Nick’s proposal or had wanted to merely protect Nick. And so she had been dying to tell John at the first chance she could get.

However, her sister had talked about what had nearly happened between Nikki and Nick with her husband. And they thought that Nikki had spilled everything to John before the completion. So they were in fact wondering if John had considered that Nick never would have proposed if he hadn’t been spending so much time around Nikki. At the same time that same idea had been going through Nikki’s head.

She wondered if she had led Nick on and she still had her doubts even as he began to threaten her about telling John himself. He had claimed that it would be better if it came from him but in reality he had wanted to undermine what she had with John. And so waiting to talk to John until they were in Japan was probably not the best idea that Nikki could have come up with.

And back home, her sister was beginning to have problems of her own. Brie’s husband Bryan had to leave WWE after an injury and so Brie wanted to discuss options with her husband because she didn’t want him to think that the only thing he was good for was wrestling. But Bryan hadn’t wanted to find something new.

He wasn’t ready to move on, at least for the time being, and that had frustrated his wife to no end. Yet it wasn’t always easy to just walk away from a career. Especially one that you had dreamed about your whole life.

And that went for Nattie’s husband TJ as well. TJ had bruised his spinal cord and the doctors had told him that he needed surgery. So Nattie was naturally worried about that surgery and what it could mean for them.

If one thing were to go wrong, then the doctors could end up paralyzing her husband or worst killing him. And odds are TJ was never going back in the ring. So everyone was forced to readjust their lives and some like Bryan weren’t taking it well.

So Kevin told her that he would never leave her. And though it hurt that she kept certain things to herself, it did seem like he was willing to forgive her for their broken engagement because he too didn’t want to lose her.

And as for Nikki and John, she had told him about what Nick had tried to do. Only John didn’t lose it. He said that if she wanted to be with Nick then he wasn’t going to stop her. Although he did love her.