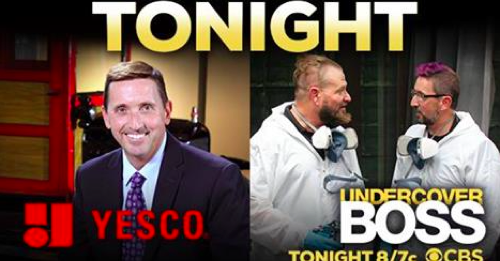 Tonight on CBS their Emmy award winning reality show, Undercover Boss continues for an all new Friday January 15, season 7 Episode 5 called “YESCO,” and we have your weekly recap below. On tonight’s episode, Jeffrey S. Young, co-owner of YESCO, works undercover at his custom electric sign company.

For those of you who don’t know, each episode features a high-ranking executive or the owner of a corporation going undercover as an entry-level employee in his or her own company. The executives alter their appearance and assume an alias and fictional back-story. The fictitious explanation given for the accompanying camera crew is that the executives are being filmed as part of a documentary about entry-level workers in a particular industry, or a competition with another individual with the winner getting a job with the company. They spend approximately one to two weeks undercover (one week being the norm in some editions, such as the U.S. version, and two weeks in some other versions, such as the Australian edition), working in various areas of their company’s operations, with different parts and in most cases a different location each day.

On the last episode, Muscle Maker Grill chairman Tim M. Betts worked undercover at his restaurants. Rod Silva, the high-energy founder of the company, secretly gives Betts ongoing commentary as he observed the action via a live video feed. Did you watch the last episode? If you missed it, we have a full and detailed recap right here for you.

On tonight’s episode as per the CBS synopsis, “Jeffrey S. Young, co-owner of YESCO, works undercover at his custom electric sign company and faces his fear of heights when he must change a light high above downtown Chicago.”

#UndercoverBoss tonight features Jeff Young, the co-owner of YESCO an electric sign company. It’s the largest custom sign maker in the US with 1300 employees and 85 locations. It’s a family business.

Jeff Young is the co-owner and says he’s infatuated with the technology. Their signs are in sports venues, hotels, and more. The Welcome to Las Vegas is one of their most famous. He says he loves signs.

YESCO started in 1920 when Jeff’s granddad started it as an immigrant. His dad took over in 1969. He and his brothers took over in 1988. He says they went all in on LEDs and opened franchises.

We see Thomas, his dad, welcoming them to a family picnic. Jeff says they’re Mormoms so it’s a different kind of leadership and talks about the company ethos of clients first. He tells his family he’s worried about being found out.

They tell him to color his hair and put on fake tattoos – things that people won’t think of with him being a Mormon. The company has been around for 95 years and he wants to keep expanding but is worried about misalignment.

He’s disguised as an inventor who’s competing. He gets purple highlights and an earring. His family laughs at him. He heads out and says goodbye to everyone. First up is Chicago at a franchise to work with a service technician.

He says Chicago was one of the first franchises so it’s important. The guy he’s working with says they have to climb a giant sign and do some repairs. Jeff is scared of heights even though he knows there’s fall protection.

Jeff is freaked out even though he’s hooked on to a line. They spot the bad card and pull it out. They fix the sign and he asks Sal how long he’s been doing it. He says it’s a rough way to make a living and says they work 20 hours a day and don’t get time off.

He says they don’t get training from the home office and that slows them down a lot and is a waste of time. Next they go to see the House of Blues sign, an old school neon sign. The O is out and Sal says it’s extremely high voltage and it’s very dangerous.

Sal says neon glass is very fragile and says he gets shocked pretty regularly. Jeff is concerned that the bucket wobbles as they go up. Their repair is a success and Jeff is pleased. He says Sal is very impressive and has skills.

Jeff asks about the long hours that he works and Sal says all the guys do it. He says he’s the only certified electrician and says they have to learn how to maintain these devices with no training from the home office.

He says a training program would make things faster and safer. Sal says he has cardiovascular disease and says he’s had three minor heart attacks. He says he likes his work and is proud of what he does.

Next is Las Vegas. He’s at the sign shop where many iconic signs were created. He meets with Michael to work in the sign lettering department. He says they pull letters for marquee signs. His son Zach works there as well.

He shows him where the letters are and the sign they’re making. Michael comments that he’s pulling the wrong letters and colors. He says he’s going to spend overtime making up for this. Jeff goes to the bathroom and finds someone wrote something on the wall about being demoralized.

Jeff asks Michael about the bathroom sign and he says they just did a bunch of layoffs and people are upset. Jeff says his heart goes out to those affected but sales there ebb and flow. Michael says they came to Vegas in the recession with $400 in his pocket.

He says they were homeless and lived on the street. He says he got a $1 chicken sandwich each day and says his family was able to get into a homeless shelter. Jeff says that’s amazing. He asks how long will he stay there and he says as long as they will let him.

He says his son only works there four hours a day because he has a heart condition. He says he needs a valve replacement surgery but it’s not cheap. Michael calls his son over and introduces him to Zach.

The next job is also in Vegas and is working with the department that makes interior signs. He works with Eric, the paint foreman. He says they’re making a sign for a casino floor. Jeff says he doesn’t know how to paint.

They go into the room to mix the paint up. Jeff says his grandfather was a painter yet he’s never done it before. Next Eric shows him how to sand and he does it pretty poorly. He asks about Eric’s family and he says his son Josh also works there and a daughter going to college in Utah.

He’s worked there 25 years and says he questioned some things lie not getting raises and he changed his attitude and then he built the department from scratch and has been the boss here.

He says things have changed and that the culture has changed and there is no more company family picnics or anything. He says everything is always out to bid. He says their product is great but some people don’t want to pay for the quality.

Eric talks about his oldest son died when he was six from an ATV accident. He says it made him stronger and says they honor him all the time. He says his birthday was 1/18 and they use that number all the time.

Jeff leaves and cries. He talks about how this experience has given him new eyes on the company. He says the layoffs hit him hard and says his grandfather wanted something better. He says he wants people to feel appreciated.

He says they need to make changes and give people hope. Jeff gets his makeover undone. Now it’s time for the #BossReveal. He tells Sal he’s so proud of how he represents YESCO. He says he’s impressed with him.

Sal says they are a closed door to the guys out front. He says they need training. Jeff says that’s why he went undercover. Jeff says he wants to bring Sal to Utah for special training and he wants him to help him develop the training program.

Then Jeff says they talked about his health and his overtime. He says he’s making changes so the franchise operators are more sensitive. Jeff gives him $60k to replenish his retirement fund. Sal thanks him. Sal says he has a lot of relief about his retirement now.

Eric is next. Jeff says he’s impressed and grateful for what he does for the company. He says he wants to put his ideas in place. He tells Eric he’s going to get all of his ideas down on paper so they can put them in place.

He says he heard what he said about the change in culture. He says he heard that and says he’s giving the foremen a $25k fund for worker appreciation. Then he brings up his tragedy about his son. He tells him every January 18 they are going to put his son on billboards across the country.

Eric starts crying and says thank you. He also gives him $40k towards his daughter’s college. He says that’s in the name of his son Rayland that he lost. Eric stands up and hugs him and says he was sweating it.

Eric calls his daughter and tells him about the college money. His daughter freaks. She’s crying and he says that will change his daughter’s life. Next is Michael. Jeff tells him his sacrifice for his family is a story that needs to be told.

He says he has five kids and that sets an example for him. Jeff says he wants to help him. He says they’re giving him $100k. Michael says only if it doesn’t hurt the company or cause people to be laid off. Jeff says it won’t.

Zach waits outside and he tells him that it was Undercover Boss and they gave them $100k. Since then, Sal has been writing a training manual with Jeff. Eric is working on improving employee morale. Michael bought a new car and is looking for a new home for his family.