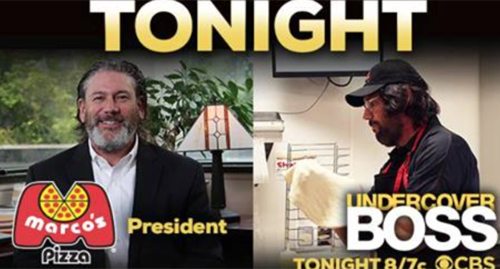 Tonight on CBS their Emmy award winning reality show, Undercover Boss continues with an all new Friday January 29, season 7 Episode 7 called “Marco’s Pizza,” and we have your weekly recap below. On tonight’s episode, Bryon Stephens, COO of Marco’s Pizza, works undercover at his company to meet the employees who rake in the “dough” for his fast-growing business.

On the last episode, Scott Gerber, Principal and CEO of Gerber Group, a hospitality industry leader with 14 chic hotel bar and restaurant venues, including Whiskey Park, Whisky Blue and The Roof, went undercover to meet his employees who kept the party going.

Wearing a disguise of a mullet, beard and glasses on his undercover journey, Scott realized there’s a missing ingredient at his company that’s impacting his employees – the hands-on leadership and warmth of his late father. Also, Scott’s brother, Kenny, took his place on one mission and found a dedicated employee who’s worked to the bone. Did you watch the last episode? If you missed it, we have a full and detailed recap right here for you.

On tonight’s episode as per the CBS synopsis, “Bryon Stephens, President and COO of Marco’s Pizza, the nation’s fastest-growing pizza franchise with nearly 700 locations in 35 states, goes undercover to meet the employees who rake in the “dough” for his company. During Stephens’ journey, he finds an employee who is spread too thin and learns that super-sized advertising may be the recipe for success for his brand.”

Byron Stephens hadn’t been born with a silver spoon in his mouth yet through sheer will and determination he now sits as the COO of Marco’s pizza.

Byron had grown up struggling and because of that he hadn’t received any formal education. Yet Byron is now known as the leader in the co-branding environment. And practically a wizard in the franchising world.

However, it’s been a long time since those days when he worked the dish room at the local Holiday Inn and if he wants to turn Marco’s Pizza into a global franchise one day then he had to get a look at the business from the ground up. And pay attention to the people that he’s hopes is capable of doing everything that he throws at them. So Byron had decided to take a drastic step. He chose to come on “Undercover Boss”.

You see while he has a lot of great ideas, he knew that the show would help him more with his plan for the future than any old spreadsheet. And that’s also why he was willing to literally do anything they threw at them. Even if it made him look bad.

Because as you know this show does hand out makeover. Though Byron’s wasn’t bad and in fact he got off lucky. All they did was dye his hair and give him a pretty interesting backstory. And so he had gone in undercover as Jay the tech savy and echo-nut who had won an opportunity to appear on a reality show.

Yet his first stop hadn’t been smooth. “Jay” had gone to work at the distribution center in Maumee, Ohio and he was supposed to be Tom’s backup. Tom was a delivery truck driver and lately there had been a lot of holdups/ violence on the job. So initially Ted had been really glad to see him.

Tom mostly delivers at night and sometimes the building doesn’t have a light out in the back. Therefore, it could not only be scary but pretty dangerous. And more than anything what Tom needs is for someone to reassure his safety. Although Byron the COO hadn’t known that there had been problems with deliveries.

And also “Jay” had actually been good on the job. He had gotten tired fairly quickly and he had seen possible mishaps even though those hadn’t fazed Tom. So Tom had to push him at times and then motivate him at others.

But “Jay” had learned from him. He learned there was a security issue and he also learned that his truck drivers were mostly forced to spend without seeing their families. And so he said he was going to work on that.

Though that hadn’t been worst of it. “Jay” had gone to work at the Marcos in Sanford, Florida and he came under the supervision of Tyler the general Manager. Now Tyler had a lot of traits that Byron remembered from his own days at the Holiday Inn so he basically saw Tyler as a younger version of himself.

Tyler had helped the Marcos down there shift from owner to owner without transitional problems. And he had personally forgone college in order to support his mother who had sacrificed for him. So Byron had felt kind of proud of this young man who knew to put family before himself.

Byron has children and unfortunately he doesn’t have the relationship with them that he wants. He had spent of the early years working hard and climbing the corporate ladder. A fact he blames on him being highly competitive and having neurotic insecurities about his education. So Byron had purposely missed out on a lot of things and he can’t get that back. But the more he talks with the people he’s meeting – the more he regrets his past actions.

Tom is missing out on his children growing up, Tyler had to give up on college in order for his mom to finally slow down, and later “Jay” met Howard who is now sleeping on a coach to save up money while his father looks for work.

Howard delivers pizzas at the Marcos in Texas and apparently there’s a problem with marketing. Which is something that had been said while “Jay” had been in North Carolina as well. Marketing it seems needs work because a lot of people simply don’t know about Marcos or have ever heard the name. So at the end of all of his shifts – Byron learned what needed to be change in both his personal and corporate life.

He later reached out to his daughter in order to repair their relationship and he also had surprise in store for the people he met.

After he revealed himself, Byron gave each of the people that had inspired him thousands of dollars in scholarships for themselves or in Tom’s case his children. And he offered them positions that would help towards their individual promotions. For not only did they help see where his marketing was failing but he learned about the new machinery they need as well as precautions that needed to be implanted.

And you know what? Not one of those people have let him down!