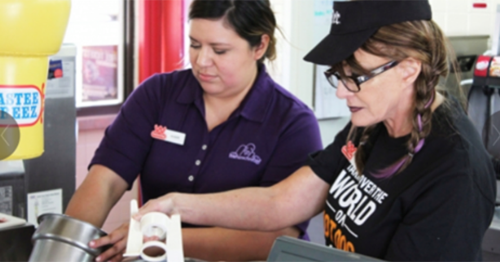 For those of you who don’t know, high-level corporate execs leave the comfort of their offices and secretly take low-level jobs within their companies to find out how things really work and what their employees truly think of them.

On tonight’s episode as per the CBS synopsis, “Wienerschnitzel CEO Cynthia Galardi Culpepper works undercover at her fast-food chain that specializes in hot dogs and has more than 330 locations throughout the U.S., Panama and Guam; also Golden Krust Caribbean Bakery and Grill CEO Lowell Hawthorne works undercover at his family-owned manufacturer, distributor and franchisor of Caribbean-inspired cuisine.”

Wienerschnitzel CEO and Chairperson Cynthia Galardi-Culpepper is just the latest person to get a makeover on tonight’s all new episode of “Undercover Boss”.

Apparently Cynthia had been married to John Galardi. John had opened Wienerschnitzel back in 1961 and the reason he had gone into hot dogs was because he hadn’t wanted to compete with his best friend who would go on to open Taco Bell. So while the business may have begun as a way to make a name for himself without encroaching on anyone else, it probably never crossed his mind that Wienerschnitzel eventually become the biggest hot dog chain in the world. Or that Cynthia would one day want to take it national.

Yet, that was the end goal. Cynthia who had later divorced John had remained on very good terms with him and that led to her ultimately taking control over the company after he died. Which hadn’t been an easy feat. For it seems like there were a few people that didn’t think she was qualified for the job and that she had merely been John’s blonde bimbo. So there was a lot that Cynthia had to put up with in order to just to win some respect in the business world though she hasn’t let any of that slow her down or stop her from wanting to push the company further.

So one could say that Cynthia had always been committed to the success of Wienerschnitzel and its her commitment that led her to “Undercover Boss”. The show allows Cynthia the chance to see her various employees during their day to day and it gives her the opportunity to spot something wrong that would otherwise have been glossed over if she had stopped by as the CEO. And therefore “Undercover Boss” helped her decide if expansion really was in the cards.

And so going in as “Louise” with all the makeup that makes appear as if she’s Goth, Cynthia tried her hand at numerous jobs involved with her company. Louise’s cover story was that she was on a reality show. So no one questioned the cameras. But Brock for one questioned whether or not Louise had experience with the fast food industry. Brock who was the shift manager at a local Wienerschnitzel had showed Louise the ropes around the restaurant and often he had been the one to step in when he noticed that she was having problems although the computer system appeared to be her biggest hurdle.

Brock had explained a complicated computer system to her at start of her shift however it had still been for Louise to get the hang of it. The computer system would light up in separate colors so that each station knew which orders they were going to be handling, but Louise’s station was having problems with colors green and white. The green admittedly looked off-white and the white could have looked brighter. So right away Cynthia found the first problem because she realized that the computer system needed to be updated.

Brock who had merely gotten used to a defunct computer system hadn’t seen the problem yet Cynthia the CEO did. So she later marked that off as one of the first things that she wanted to fix and, once her shift was over, she got a chance to talk to Brock. The young man had been through some hard times particularly with drugs and it turns out that his backstory had hit a note with Cynthia’s. Cynthia had grown up in a household with addicted parents so she knew what it was like see someone struggle up close. And how hard it must have been for Brock to overcome his own addiction.

Though Brock’s story wasn’t the only one that had affected Cynthia. Cynthia had met Zavier at another local restaurant when it had been his job to teach her how to handle the drive through window however she probably noticed how patient he had been with her. And as they go to talking, they had both opened up about what it was like to live with parents that were abusive. So Cynthia had known from that very moment that she was going to help Zavier get on his feet.

Only Zavier wasn’t the only one that was making the best out of a bad situation. Cynthia had also stopped by Kent Quality Foods which was Wienerschnitzel’s general supplier. And there she had met a young woman that does a grueling job at keeping up production yet she was able to do all of that while maintaining safety and health protocols. So Cynthia had wanted to show her appreciation to Kent Quality Foods as well as help out Channing who was also supporting her whole family on her one paycheck.

But while Cynthia ultimately helped Brock start working on his savings with quite a large check, give Zavier and Channing both the means and sometimes the car to go back to school – nothing compared to what she did for TJ. TJ had once owned a limited franchise of Wienerschnitzel but thanks to Cynthia he came to own his franchise in full. And that meant he didn’t have to deal with the Franchise Area Director.

The Franchise Area Director had found a way to continuously put TJ and his girlfriend who works with him down. And often they would get in trouble over the smallest things. So soon after Cynthia ditched her wig for her undercover job – she went to that Area Director and had a certain chat.

However, one CEO managed to run into more than his share of unhappy employees on tonight’s second half of “Undercover Boss” and he had no idea that there had even been a problem.

CEO Lowell Hawthorne of Golden Crust Caribbean Bakery & Grill had come onto the show because he knew that he wanted to expand the Golden Crust brand and that he needed to make sure that everything was running as best as it could before he would take the risk of said expansion. But a lot of people was going to recognize Lowell seeing as it had been his family that came up with the recipes and Golden Crust itself. So Lowell a little more drastic than anyone else that’s been on the show. He actually had to get fake dreads and rock a Rastafarian style.

And while that was funny knowing the truth, the get up did help Lowell go in undercover and it had allowed people to be more open with him. So no one second guessed a man that called himself Mark. They knew that he wasn’t good at certain jobs, but not a lot of people suspected who he really was. That is until someone outed at one of his jobs.

Lowell had been doing just fine as Mark. He had gone to a local franchise and had worked as a cashier under Jerger’s help as well as tolerant guidance. And he had also been fine working with the Head Chef at another franchise however he ran into a familiar face at a distribution center. There someone had recognized him and refused to stop calling him in front of everyone. So Lowell thought his day at the distribution center was ruined because the truth about who he really was had put everyone on guard.

And that was unfortunate because as it turns out they were certain things that Mark got to see that he knew Lowell should fix. There had been one store that had been using “I Love NY” plastic bags rather than the ones that had the Gold Crust brand on it. So Lowell knew that he was going to have to address that problem and knew that he had to deal with the lack of corporate recipe books at the stores.

But being outted hadn’t actually worked against Lowell.

Apparently people were still willing to talk to Lowell about what wrong despite knowing that he was the boss. So Lowell still got to hear about the safety concerns at the distribution center and how cheap labor doesn’t equate to skilled labor. And therefore he knew that he was going to have to check out the other centers before anyone got hurt, but was glad to hear about the concerns from someone that was brave enough to face the boss.

Only Lowell ended up running into some other systematic problems. He had found out from Jerger earlier that she was leaving the company because her paycheck could barely cover her bills and it seems like it hadn’t even occurred to her to go after a promotion or believe that she could work her way up to manager. But while Jerger and other employees that were leaving for better opportunities could be enticed to come back, Lowell realized that there were even problems with hiring people. Lowell had gone to another local franchise where he had met Head Chef Durrant and Durrant was quite vocal about the problems there.

Durrant said that the people that do the hiring aren’t looking at experiences in the kitchen. So a lot of the time Durrant tends to hear people come into the restaurant and say his food was better than another Golden Crust. Yet that was a problem for Lowell because consistency hadn’t been kept up throughout all the restaurants and the corporate cookbook could do nothing if someone didn’t know how to cook.

And so there were problems all across the board. Good people were leaving in order to seek better opportunities, ineffectual people were being hired, and there were serious safety concerns at the distribution center. So later Lowell got to work. He convinced Jerger to stay by offering her a better position within the company and he helped with her pressing monetary concerns, he decided to hire Durrant as an executive chef which included a raise and is even going to use Durrant’s personal recipe for macaroni and cheese because it had just been that good, he got his guys to bring the distribution centers up to code and personally helped Mike who had been brave to tell him about the problems to begin with, and Lowell has put Odean on track to becoming one of the youngest franchise owners in Golden Crust history.

Odean had reminded Lowell a little of himself. So it’s only fair that someone take the same chance on Odean than Lowell’s family took on him when he first mentioned Golden Crust Bakery & Grill.