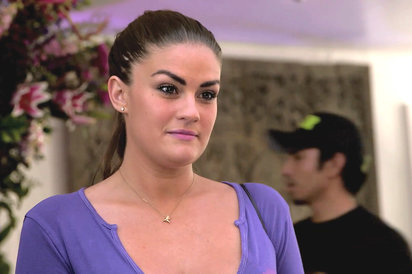 Stassi actually likes hanging around at Sur now. She admitted that she used to hate the place back when she was working there however she loves visiting the restaurant as a customer and she tends not to have a problem with being there if Lisa isn’t there as well. But recently Stassi had to visit the restaurant to speak to Brittany. Stassi had wanted to ask Brittany if she could have Jax on her podcast show as a reformed bad boyfriend and she mentioned that there were going to be a few questions that might be a little sensitive. So Brittany had heard her out and she didn’t seem to have a problem with it.

Brittany and Stassi have grown close since meeting each other and so Brittany hadn’t been afraid to ask her own questions. She had asked Stassi if Jax was going to be represented as a former bad boyfriend that she helped see the light and Stassi had said “yes”. However, Brittany later ran into Lisa and Lisa had made her doubt Stassi’s intentions. Lisa had more or less said that Stassi couldn’t be trusted and that a podcast with Stassi might be more than she was prepared for. So Brittany was left feeling that maybe she shouldn’t have agreed so readily to Stassi’s request yet she doesn’t necessarily like confrontation and she didn’t go running to Stassi with her arguments.

So Stassi simply went about her day. She continued to frequent Sur and as it happens Katie had needed her one day. Katie had apparently sat down at a table with Scheana and Lala because Ariana had wanted them all to clear the air though in truth Katie didn’t want to let go of her grudge and she became angry with Scheana for apologizing to Lala as if they had been in the wrong. Yet, Katie and her friends had been in the wrong and the only person big enough to apologize for the things they’ve said has been Scheana meanwhile everyone else wanted to continue their reign of terror as if they were the victims.

Though what’s funny about that was that Katie wasn’t even upset or said anything to Scheana right after the fact and so Scheana didn’t know that she was in trouble with Katie until after Katie talked to Stassi. Stassi was the one that usually holds onto the longest grudge ever, but she happens to influence Katie whenever they’re together and she was also the one that turned Katie against Scheana. Scheana had left the restaurant believing that everything was all good and then she woke up the next morning to text messages that said she disgusted Katie. So the only place that Scheana felt safe enough to visit and go drink (something she had promised her husband she was giving up) was Jax and Brittany’s.

Jax and Brittany have so far stayed above the fray for the most part and they didn’t mind being around Lala too much. So in a way they were objective and that’s why they sympathized with Scheana. Scheana was a grown woman that shouldn’t have to ask for permission from anyone about who she’s allowed to hang around with and so the couple did feel bad for her however Jax had to say that he saw this argument coming. Jax said that Katie, Stassi, and Kristen were bound to start something because that’s what they always do. But Jax failed to understand that he always likes to start things and that’s what he did with Stassi.

Jax later did the podcast with Stassi and isn’t wasn’t too bad. The two had shared some laughs about their past and he hadn’t really minded taking a sociopath quiz online. However, Jax being Jax meant he talked to Stassi afterwards about Scheana. He told her that Scheana was complaining about the girls demanding she pick a side and how the three were acting like mean girls. So he started something that didn’t know how to finish yet that not surprisingly he blamed the girls for the drama and his talk with Stassi made things very uncomfortable at the surprise party for Shay and Kristen’s boyfriend Carter.

The guys had each thought that they were going to the other’s surprise party and they didn’t know it was for the both of them until they got there. Yet, the ladies at the party who did admittedly want to be on their best behavior had eventually gotten into an argument. There was the trio which consisted of Stassi, Katie, and Kristen that all tended to be on one side of the party and then there was Scheana who felt left out. Scheana had gotten quite emotional when her friends had all gotten angry with her and she started crying at Sur one day in front of Lisa. So Lisa had tried to fix things and that apparently only made things worse.

So the party had been a mistake. There was alcohol everywhere and there was this grudge that no one had wanted to bring up, but that they all brought up as they discussed how mean the trio was. Though unfortunately Scheana didn’t have any place to turn to. Scheana had talked to Ariana and Tom about what’s going on and Tom had to be upfront with her. He said that Ariana’s birthday trip was booked up and that they didn’t have space for Scheana if she wanted to come with them over going to Stassi’s birthday party. And its not like he was trying to be mean or anything, he just wanted her to know that she couldn’t turn to them if things got really bad with Stassi that weekend.

But things between Stassi and Scheana blew up at the party. The ladies had argued at the table in front of everyone and then Scheana had tried to get Ariana’s opinion on what really happened between her and Lala however Stassi was simply too drunk to hear it. So Stassi and Katie became sloppy drunks as the party went on and they kept accusing Scheana as being a traitor without ever giving her the chance to speak for herself. And so Scheana later had to walk away because she realized that she was better than that.