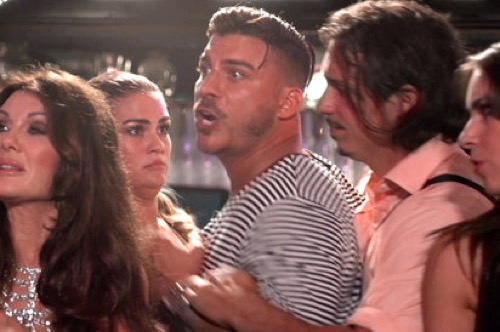 Tonight on Bravo Vanderpump Rules returns with an all new Monday March 14, season 4 finale called, “Push Comes to Shove” and we have your weekly recap below. On tonight’s episode, in the season four finale, Lisa Vanderpump hosts the biggest party of the year: Katie Maloney and Tom Schwartz’s engagement. Guests of dishonor Kristen Doute and Stassi stir up trouble, and trash-talking Lala creates a scene. Jax Taylor must atone for his crimes first in a criminal court, then in a much-anticipated reunion with Stassi.

On the last episode, Katie begged Lisa Vanderpump to have her engagement party at Villa Rosa, but Lisa balked at having Stassi and Kristen on the guest list. Faced with a looming criminal court date, Jax questioned everything in his life, including moving in with girlfriend Brittany. Katie enlisted Scheana to help plan her engagement party, Sandoval hoped to launch his music career by shooting a video, and James and Kristen pour gasoline on their old flame. Did you watch the last episode? If you missed it, we have a full and detailed recap right here for you.

On tonight’s show as per the Bravo synopsis, “in the season four finale, Lisa Vanderpump hosts the biggest party of the year: Katie and Tom Schwartz’s engagement. Guests of dishonor Kristen and Stassi stir up trouble, and trash-talking Lala creates a scene. Jax must atone for his crimes first in a criminal court, then in a much-anticipated reunion with Stassi. Tom Sandoval debuts his new song in a live performance at SUR, Scheana confronts Ariana, and Lala gets close to both Kristen and James.”

Tonight’s episode is going to be another drama packed one, which you won’t want to miss. So be sure to tune in for our live coverage of Bravos’ Vanderpump Rules season 4 finale— tonight at 9PM EST! While you wait for our recap, hit the comments and let us know how excited you are about this new episode of VR tonight and what you think of the current season so far.

Jax has managed to escape prison on tonight’s episode of “Vanderpump Rules”. Yet he wasn’t celebrating the fact that he was going to able to return home to his girlfriend and friends. And he did seem like he had come back to SUR with sort of an attitude.

Apparently Jax had gone home on an early to change clothes for a shift he had on that very same day, but for some reason he tore into Brittany of all people. He said she was crowding him and that she was put in the same effort in their relationship as him. And he also implied that she was being too messy around the apartment.

And what was more embarrassing than her listening to that was the fact she tried to excuse it. She said he was in a crappy mood and that he hadn’t meant those things because she had put just as much effort as he did. But Jax didn’t appear to care what she said or did because either way he found it annoying.

Though, Jax had gone to work and had still been in a temper. So Lisa had tried to talk about it and he had bit her head off for it. He said in his confessional that he wasn’t a child and that he didn’t like being spoken to as if he was one. And to Lisa’s face, he said he was just tired because he hadn’t slept in almost twenty-four hours.

Which was an excuse that Lisa didn’t believe in so she had made Jax walk away before he said anything else.

Only Jax wasn’t apologetic in the least. He nearly went to prison and could have lost his future yet he told his girlfriend that wouldn’t have minded it. What with everything being so crazy amongst his friends and the rest of the world.

So he was clearly going through some things, but thankfully he pulled it together for Katie and Schwartz’s engagement party. The party had a “Linen & Lace” theme and it was supposed to be this classy barbeque for the happy couple. Though it was awkward with Tom and Ariana at one table that was mostly to themselves while Scheana was at another.

And what really turned the wonderful event into something else was the unplanned guests. Both Kristen and Stassi had crashed the engagement party and admittedly the engaged couple had been glad to see them. So Lisa had allowed them to stay at party and she had warned them about causing drama, but that last part went in one ear and out the other.

Kristen had later given a speech that was long and slightly dragging. Yet her heart had been in the right place with that speech and of course Lala just had to ruin that moment by saying something. Lala made a snide comment during the speech and Katie would have thrown her out for it. If she hadn’t calmed down.

However, that was just a taste of what would happen because the after-party at SUR was where there was really a problem. Kristen and Lala had almost gotten into a fight after Kristen made some comments about Lala when she saw the other woman kissing James. And thankfully the ladies had been separated before things got to the hair pulling, but James went on to ruin the night.

He had been celebrating two-week sobriety by smoking joints all day. So that had made him slightly unaware of things. Like if he had actually drunk something though, whatever he was on, there had been no excuse for getting into Jax’s face. Much less egging on someone on probation.

So there constantly had to be a group of people that ran interference and ultimately James decided to leave the party early. And with Lala. Who suddenly wanted him back following her confrontation with Kristen.

But Jax was on a roll. He followed up his confrontation with James by going over to Stassi and apparently he said he wanted to make peace, but that didn’t explain why he began attacking Stassi for coming back. Even going as far to imply that she only did so because her life had gone to crap and that she had no one else.

And yet after they had been bluntly honest with each other, Stassi and Jax had reached an agreement to at least be cordial to each other from now on.