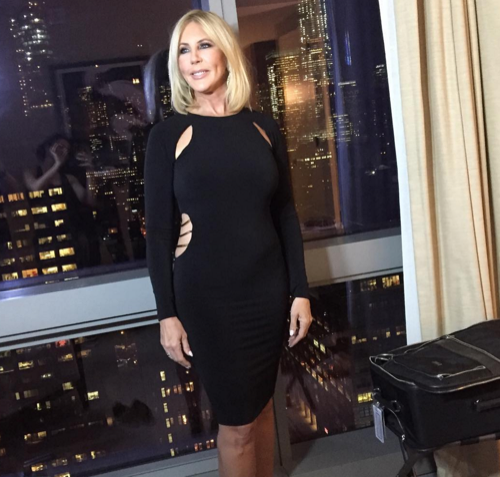 Vicki Gunvalson of The Real Housewives of Orange County fame has reportedly been lying to Bravo and her fans according to a Bravo source. Fans of #RHOC and Watch What Happens: Live might not be shocked to hear that that Vicki has fibbed again – The Real Mr Housewife reported that an inside source told him she is indeed talking with her ex, Brooks Ayers.

Andy Cohen asked The Real Housewives of Orange County star Vicki point blank if she was currently speaking with Brooks. Vicki Gunvalson said it had been a while since she’d spoken with Brooks. Andy pressed her further, wanting to know if she’d blocked him.

Vicki said she’d gone through cycles of where she blocked him then unblocked Brooks from her communication channels. But a source from the Bravo production team has revealed to Mr. Housewife that Vicki Gunvalson is lying.

As to what the exes talked about, the source wasn’t certain. But they, along with a few others, have said that Vicki has admitted she wants Brooks back, even though that’s not what she’s putting out there for the press to devour.

If you watched #WWHL last night with the #RHOC star, it was certainly filled with drama. Heather Dubrow discussed her husband Terry’s health scare, which the couple decided to keep private while they were dealing with it.

Apparently, Brooks Ayers would have also liked his medical crisis kept off the show but his wishes were not respected by Vicki. The Bravo source says that Brooks begged Vicki to not reveal his cancer diagnosis to the other cast members of #RHOC.

Against his wishes, it was Vicki who insisted on breaking the news. It didn’t matter what Brooks wanted, the source said reporting, “Vicki told Brooks it would make her daughter and the other women more sympathetic to him, nicer to him, so she went against his requests and brought it up anyway.”

The source also revealed that Vicki pushed Brooks to reveal his health crisis, despite his objections. Apparently, Brooks fabricated one medical record because he was being pushed to release info and didn’t want his personal medical information out there for public consumption on the show.

Hence, other lies from Vicki and more drama for #RHOC. The Bravo source had the last word saying, “This is not the first time Vicki has lied and it will not be the last. She really should just start telling the truth, as it would be much easier to just be honest. However, that wouldn’t fit with who she is and the dramatic life she likes to lead.”

We agree. Vicki has always loved drama. Too bad Brooks didn’t have the “manhood” needed to stand up to her. If Brooks had stood up to Vicki from the start, he wouldn’t have been dragged in to all of this garbage.

Kudos to The Real Mr Housewife for breaking this story wide open and revealing Vicki Gunvalson’s fibs about her ex. What do you think of all this, #RHOC fans? Do you think Brooks will get back with Vicki or is he tired of the lies?

Share your comments and check back with CDL often for the latest celebrity news and gossip.